The day of the war at a glance: Russian troops take over new towns - German ministers guarantee help when visiting Ukraine

In the Donbass, Russian troops are approaching the Bakhmut transport hub. 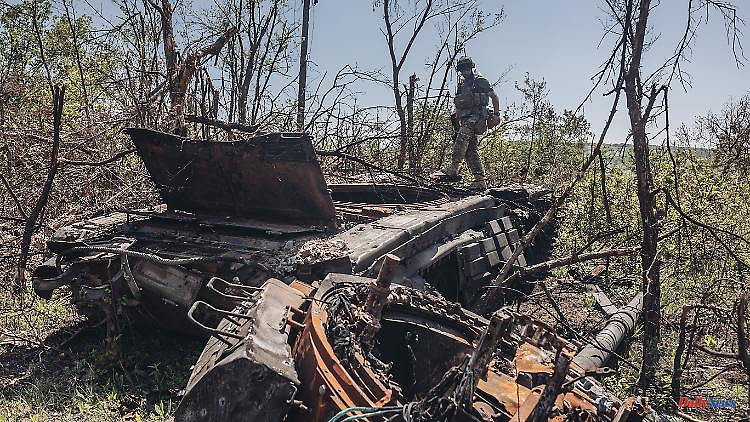 In the Donbass, Russian troops are approaching the Bakhmut transport hub. According to Ukrainian sources, they could cut off supply routes for Sievjerodonetsk there. Meanwhile, Minister of Health Lauterbach and Minister of Agriculture Özdemir are visiting Ukraine and assuring the country of support. Chancellor Scholz calls on Serbia to join Western sanctions against Moscow. The 107th day of the war at a glance.

According to information from Kyiv, Russian troops have continued to advance in the ongoing heavy fighting in eastern Ukraine. According to the Ukrainian General Staff, the newly captured towns are only about ten kilometers south-west of the Bakhmut transport hub. The Russians could now soon cut off supply routes for the important administrative center of Sievjerodonetsk. President Volodymyr Zelenskyj described the battle for the city, which once had a population of more than 100,000, as perhaps the most difficult of the war.

According to Ukrainian sources, the Russian troops tried "further unsuccessfully" to gain full control of the administrative center of the Luhansk region, the General Staff said. The attackers were also thrown back in other battles around the city of Sievjerodonetsk. The pro-Russian separatists, on the other hand, reported that the Azot chemical plant in Sievjerodonetsk had been surrounded. "All escape routes are cut off for them," wrote the ambassador of the self-proclaimed Luhansk People's Republic in Moscow, Rodion Miroshnik, on Telegram. He admitted the possibility that civilians were still staying on the site. The Ukrainian side had spoken of hundreds of people using the basement as an air raid shelter.

According to their own statements, the Russian armed forces attacked an airport and a tank factory in eastern Ukraine during the night. "At the Dnipro airport, high-precision surface-to-air missiles were used to destroy aircraft of the Ukrainian armed forces, and in the Kharkov area production capacities for the repair of weapons technology," said the spokesman for the Russian Defense Ministry, Igor Konashenkov. At the front, more than 500 Ukrainian soldiers were killed by Russian air, rocket and artillery strikes, 13 armored cars, 9 artillery pieces, 6 rocket launchers and 16 military vehicles were disabled and 16 ammunition depots were destroyed. In addition, Konashenkov reported on the shooting down of two fighter jets and five drones. This information cannot be verified independently.

According to Ukrainian sources, both sides have exchanged prisoners for the 11th time since the beginning of the war. Four Russians and five Ukrainians have been handed over to their home countries, a Ukrainian governor wrote on Telegram. One of the released Ukrainians was Mayor Oleh Pylypenko, who was kidnapped by Russian forces on March 10.

During his trip to the Balkans, Chancellor Olaf Scholz called on the EU accession candidate Serbia to comply with the European Union's sanctions against Russia. "We expect that the sanctions will also be implemented by those countries that are moving in the EU accession process," he said in Belgrade after talks with Serbian President Aleksandar Vucic. Belgrade has condemned the Russian attack on Ukraine in the UN General Assembly and in other bodies. However, his country takes a different stance on the sanctions, he continued. So it has to take into account that it is in a "very complicated situation" with regard to the energy supply.

Serbia has been negotiating to join the EU since 2014. At the same time, it maintains close ties with Russia and China. The Balkan country does not want to accept the EU sanctions against Russia at the moment because it sees its economic interests at risk. Among others, the country gets almost all of its gas from Russia.

Lauterbach and Özdemir in Ukraine

During his visit, Federal Health Minister Karl Lauterbach promised Ukraine support for the care of the seriously injured over a long period of time. "Ukraine needs humanitarian aid just as urgently as our military support," he said in Lviv, western Ukraine. Trauma centers for the injured and special container workshops for the manufacture of prostheses are to be set up. The SPD politician also reported that 200 surgeons and emergency physicians had offered to work in Ukraine through the German Medical Association. They wanted to be deployed there "as soon as possible". Lauterbach accused the Russian army of "even targeting medical facilities".

In Nemischajewe near Kyiv, Federal Minister of Agriculture Cem Özdemir promised Ukraine German help to maintain agriculture and exports despite the ongoing Russian war. "The success of Ukrainian agriculture is not only important for Ukraine, it is important for all of us," said the Green politician at an agricultural college with a view to exports for global food security. As concrete aid, Özdemir announced, among other things, 500,000 euros to expand laboratory capacities in Izmail on the border with Romania in order to speed up the processing of agricultural exports. In addition, Germany wants to provide five million euros for veterinary medicines. The war has led to tight global agricultural markets and rising prices, and is also raising concerns about food security in some countries. Because Ukraine is a major exporter of wheat, among other things, mainly to North Africa and Asia.

The federal government is keeping a low profile on arms deliveries

Despite Ukrainian calls for more clarity on the delivery times for the promised weapon systems, the German government is keeping a low profile. For organizational reasons and security issues, it is tricky to talk about schedules, said government spokesman Steffen Hebestreit. The preparation is in full swing. "But that doesn't happen overnight." The Ukrainian ambassador to Germany, Andriy Melnyk, had previously criticized in the "Tagesspiegel" that there was no clarity as to when, for example, the MARS multiple rocket launchers from Bundeswehr stocks would be handed over.

Britain warns of a cholera outbreak in the Ukrainian port city of Mariupol, which was occupied by Russia. The danger is very high, said the British Ministry of Defense on the basis of a situation report by the secret service. Health care in the city controlled by Russian troops is on the verge of collapse. A feared outbreak of cholera would further aggravate the situation. Russia is not able to provide basic services in the areas it occupies.

From the point of view of former NATO Secretary General Anders Fogh Rasmussen, the Russian invasion of Ukraine is a continuation of the occupation of the Black Sea peninsula of Crimea. Seeing a nuclear power launch a full-scale invasion of a neighboring country was hard to believe, he said in Copenhagen. "Actually, we shouldn't have been surprised," he added. The path taken by Russian President Vladimir Putin was never kept secret. 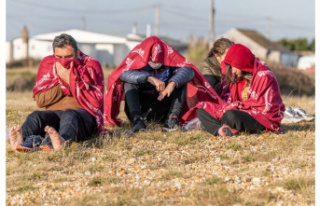