The day of the war at a glance: Selenskyj sees a threatening situation in the east - Lavrov is angry after the overflight has been removed

Three countries in the Balkans refuse to allow the Russian foreign minister to fly over them. 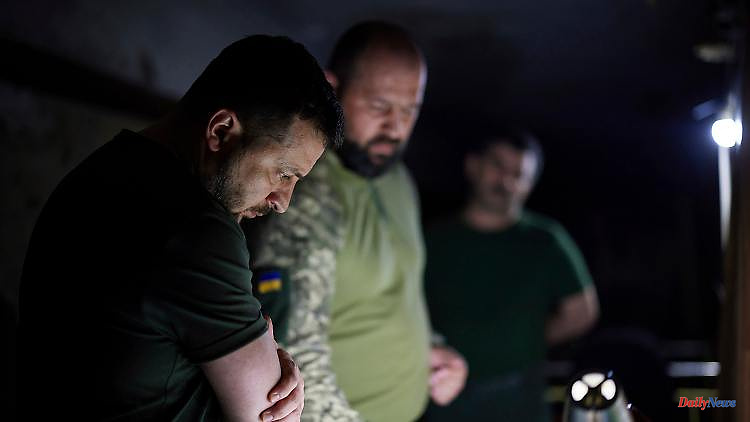 Three countries in the Balkans refuse to allow the Russian foreign minister to fly over them. He finds it "outrageous". According to their own statements, the Ukrainians achieved one success on the water: pushing back the Russian fleet. On land, meanwhile, they find themselves confronted with delicate combat situations. The day of the war at a glance.

Difficult situation in Sieverodonetsk and Zaporizhia

The situation is getting worse in the eastern Ukrainian city of Sievjerodonetsk. After recapturing about half of the city, the Ukrainian units had to retreat back to the industrial area, said the Ukrainian military governor of the Luhansk region, Serhiy Hajdaj, on Ukrainian television. President Volodymyr Zelenskyj also sounded dismayed. "We're holding the position, just holding the position," he said, according to the Interfax-Ukraine agency. The Russian troops are superior. "Nevertheless, we have every chance of continuing to fight in this direction," emphasized the 44-year-old.

For the Ukrainian troops there are "gradual" successes in the neighboring Kharkiv region. However, the situation is "most threatening" in the Zaporizhia region, where the Russian army is threatening the region's capital, he said after a visit to the front. Army spokesman Olexander Motusyanyk reported intense fighting "almost along the entire front line in the Luhansk and Donetsk regions." The Russian Air Force has flown 39 air strikes outside of eastern Ukraine. Targets in the country were also fired at with land-based missiles from the Crimean peninsula, which was annexed by Russia.

There was a dispute over airspace, which according to Kremlin spokesman Dmitry Peskov was even a "hostile act". This is how he interpreted the blocking of European airspace by Bulgaria, North Macedonia and Montenegro for Russia's Foreign Minister Sergey Lavrov, who wanted to travel to Serbia. His travel plans burst.

The Russian Foreign Minister himself criticized the blockade by some "NATO members" as "outrageous". The closure of the airspace is a "disgraceful punishment" for a country that wants to independently determine its foreign policy according to its own national interests, Lavrov said. "The puppeteers in Brussels want to turn the Balkans into their project of a closed Balkans." Lavrov said that Western countries were having more and more problems of their own, but they were trying to complicate relations between other countries.

Meanwhile, the Ukrainian army reported a success on the water: According to their own statements, they managed to push back the Russian fleet more than 100 kilometers from the country's Black Sea coast. According to the Defense Ministry in Kyiv, the Russian fleet was "deprived of total control over the north-west of the Black Sea". However, Russia is trying to regain control of the sea area, and the cities on the coast are still threatened by Russian missile attacks. In addition, the Russian fleet continues to block civilian shipping, the ministry said.

Minister of State for Culture Roth promises help to Odessa

Minister of State for Culture Claudia Roth arrived in Odessa in the afternoon for a two-day visit. The Greens politician is the first member of the federal government to visit the strategically important port city on the Black Sea more than 100 days ago after the start of the Russian war of aggression against Ukraine. Roth wants to help the Ukrainian city apply for UNESCO World Heritage status. The Greens politician assured the Ukrainian Minister of Culture Olexandr Tkachenko and the mayor of the south-west Ukrainian city, Hennady Trukhanov.

Agreement for Grain Passage by Sea?

According to a media report, the Russian leadership has agreed a scheme with Kyiv and Ankara to release grain deliveries from the previously blocked Black Sea port of Odessa. "In the sovereign waters of the neighboring country, the Turkish military will take over the mine clearance and they will also accompany the ships into neutral waters," the Kremlin-affiliated daily Isvestia described the planned process, citing government circles. The Russian blockade of Ukrainian ports led to fears of famine, especially in poor African countries, since the country is one of the largest exporters of grain. Foreign Minister Lavrov is expected to hold talks in the Turkish capital on Wednesday.

Meanwhile, the Ukrainian President Zelenskyj warned again against an increasingly dramatic blockade of grain exports. The blocked amount of grain destined for export from Ukraine could triple to 75 million tons "by the autumn", he said. Before the Russian invasion, Ukraine was the world's fourth largest exporter of wheat and corn. Between 20 and 25 million tons of grain are currently blocked, "by the fall this number could rise to 70 to 75 million tons," Zelenskyy told journalists in Kyiv.

UN representative of Russia leaves the hall during speech

At the diplomatic level, meanwhile, there was a scandal in New York that evening: During a speech by EU Council President Charles Michel, Russia's UN Ambassador Wassili Nebensya left the UN Security Council. Michel had previously addressed the Russian representative directly at the Council meeting on the war in Ukraine, accusing the Kremlin of stealing grain from Ukraine, among other things. As a result, Nebensia, who had previously given a speech and repeatedly rejected allegations made against Russia by representatives of other countries, left the Council. "You can leave the room, dear Mr. Ambassador, maybe it's easier not to listen to the truth," commented Michel.

Russia sanctions 61 US politicians and managers

Russia also imposed sanctions on 61 US politicians and managers. Among them are Finance Minister Janet Yellen and Energy Minister Jennifer Granholm, the Foreign Ministry said in Moscow. The sanctions were also aimed at leading managers from the defense industry and the media sector. It was in retaliation for expanding US sanctions against Russian officials.

1 UK. Boris Johnson survives a vote against confidence... 2 "Something died in me": Lewandowski wants... 3 Boris Johnson wins majority confidence vote 4 Soccer. League of Nations: Deschamps is "not... 5 Bonds on the up: Wall Street starts the week recovered 6 CarPlay with much more access: Apple relies on the... 7 Soccer. League of Nations: Still no win for the Blues,... 8 Football / France Espoirs Team. The Bleuets to Euro... 9 UNITED STATES. Five far-right activists are charged... 10 700 problem reports a day: railway workers draw mixed... 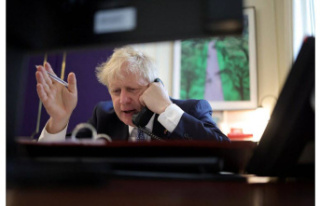