The day of the war at a glance: Ukraine celebrates successful counterattacks - rocket fire on Zelenskyy's hometown

After the withdrawal of Russian troops, the Ukrainians celebrate their interim success in the liberated areas in the east of the country. 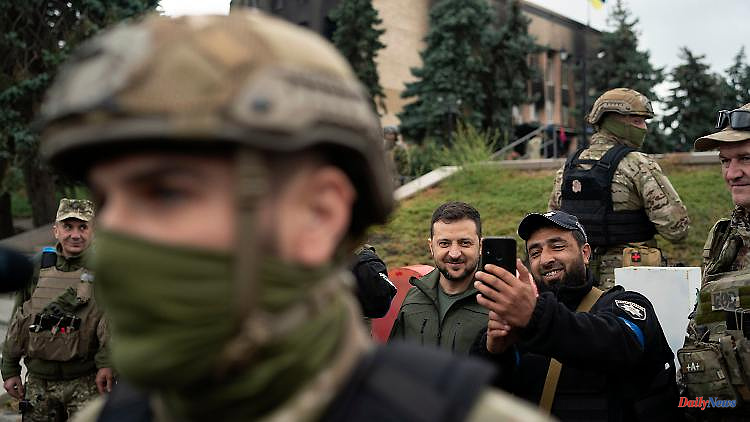 After the withdrawal of Russian troops, the Ukrainians celebrate their interim success in the liberated areas in the east of the country. President Volodymyr Zelenskyy traveled to Izyum in the Kharkiv region, took selfies with soldiers of the Ukrainian army and had his picture taken next to the Ukrainian flag, as photos in the 44-year-old's Telegram channel showed. "Our blue and yellow (flag) is flying over the liberated Izyum," said Zelenskyy. He also announced a further advance of the Ukrainian army: "We are moving in only one direction - forward and to victory". The joy of the success was clouded by the first reports from the Ukrainian authorities on alleged war crimes by the occupiers. The 203rd day of the war at a glance.

A spokesman for the Luhansk separatist militia LNR has confirmed that Ukrainian troops are approaching the border of the self-proclaimed People's Republic, the TASS news agency reports. According to the exiled Russian portal Meduza, the separatists admitted that the Ukrainian troops are only about 10 kilometers away from the border of the territory controlled by the self-proclaimed republic. In a broadcast on Russia-1, separatist spokesman Andrey Marochko said "that's very little in terms of military operations." The situation is "really complex". The Ukrainian military governor Serhiy Hajdaj says that a regional headquarters for the de-occupation has already been created. However, he warned people to be patient. "Unfortunately, we won't be in Luhansk tomorrow, but soon," he wrote on Telegram.

According to Ukrainian sources, the central Ukrainian industrial city of Kryvyi Rih was hit by Russian cruise missiles. President Volodymyr Zelenskyy confirmed that a hydroelectric power station on the Ingulets River had been damaged. He spoke of an attempt to flood his hometown. Unverified videos showed that the Ingulez water level was rising rapidly. "All the occupiers can do is sow panic, create an emergency, leave people without light, heat, water or food," Zelenskyy wrote on Telegram. "Can that break us? Not at all." Hydrotechnical facilities were badly damaged by the "massive rocket attack," said Valentin Resnichenko, head of the administration of the Dnipropetrovsk region. The water supply had failed in some parts of the city. Resnichenko spoke of seven Ch-22 cruise missiles fired from a distance by Russian fighter jets. The transport infrastructure was also attacked. Initially, there was no information about victims. In the presidential office in Kyiv there was talk of eight incoming missiles. Deputy chief Kyrylo Tymoshenko spoke of an act of terrorism because critical infrastructure had been hit.

The Ukrainian Deputy Prime Minister Olha Stefanischyna told the French broadcaster France24 that there had recently been certain contacts from the Russian side. At the same time, she qualified: "We shouldn't just talk about the negotiations, but also the purpose of these contacts by Russia." Russia may only want to distract with such proposals, she said. "We will be ready to negotiate when the moment is right for Ukraine."

Kremlin: Security guarantees for Ukraine are a danger for Russia

The Kremlin described a concept for security guarantees presented by Ukraine as a threat to Russia. Ukraine is still aiming for NATO membership, Kremlin spokesman Dmitry Peskov told the Interfax news agency. "Accordingly, the greatest danger for our country remains and the reason for the necessity of the military special operation remains current, yes it is even more topical," said the 54-year-old. Russia's position on the concept is "negative". On Tuesday, Kyiv presented a concept for the time after the end of the war. Among other things, a group of countries should guarantee the security of Ukraine politically and legally.

During her trip to Kyiv, EU Commission President von der Leyen also wants to work towards Ukraine gaining access to the European internal market. In a speech in the European Parliament in Strasbourg, she also promised Ukraine 100 million euros to rebuild destroyed schools. Russia's attacks destroyed more than 70 schools in Ukraine.

Von der Leyen did not expect the EU sanctions to be lifted in the foreseeable future. "I want to leave no doubt that the sanctions will last," she said. Moscow is responsible for the fact that the Russian economy is falling behind. The war is not only aimed at Ukraine, she stressed. "This is a war on our energy supplies, a war on our economy, a war on our values ​​and a war on our future."

Guterres is also speaking to Putin

After a month-long break, Chancellor Olaf Scholz called Russia's President Vladimir Putin for the first time on Tuesday and pushed for a diplomatic solution. Following talks with Putin, UN Secretary-General António Guterres also showed no hope for peace negotiations between Moscow and Kyiv in the near future. "It would be naïve to think that we are close to the possibility of a peace agreement," Guterres said in New York. Although the United Nations is ready to work on a diplomatic solution in every respect, the chances of this are currently "minimal". Guterres said he spoke to the Russian president on the phone on Wednesday.

The Inspector General of the German Armed Forces, Eberhard Zorn, was cautious about the Ukrainians' chances of further success. At best, he sees "counterattacks that can be used to win back locations or individual sections of the front, but not to push Russia back across the board," Zorn told Focus.

The Ukrainian army acts "wisely, rarely offers a broadside and conducts operations with confidence and very flexibly," said Bundeswehr Inspector General Zorn. Two weeks ago he said that the entire Donbass would be in Russian hands in six months. "Today I say: They won't make it." But the highest-ranking soldier in the Bundeswehr doubted whether the Ukrainians really had the strength for a counteroffensive: "They need a superiority of at least 3 to 1." Zorn also defended the previous German arms deliveries and described the list as "considerable".

Fines and imprisonment for Ukrainian "battle song" in Crimea

Meanwhile, on Crimea, a Ukrainian peninsula annexed by Russia, a court handed down prison sentences for a Ukrainian song. The court in the city of Bakhchisarai ordered six "organizers and participants of the wedding" to prison terms of between 5 and 15 days and fines of the equivalent of more than 800 euros, as local media reported on Wednesday. The song was dubbed a "battle song of Ukrainian nationalists" in the reports.

A video shows the wedding guests dancing wildly to a patriotic song that has become a symbol of Ukraine's resistance to February's Russian invasion. The court used paragraphs banning "Nazi symbolism" and the ban on discrediting the Russian armed forces as the legal basis. The owner of the restaurant later distanced himself from the incident in a video. The Ukrainian Black Sea peninsula of Crimea was annexed by Russia in spring 2014 after the pro-Western coup in Kyiv. Retrieving the peninsula using military means is one of the declared goals of the leadership in Kyiv. 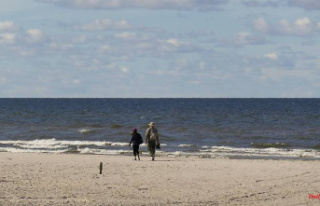 State of the oceans "critical": Germany...