The lost candidate: the Georgians want to join the EU, but their government doesn't

Ukraine and Moldova are to become EU accession candidates. 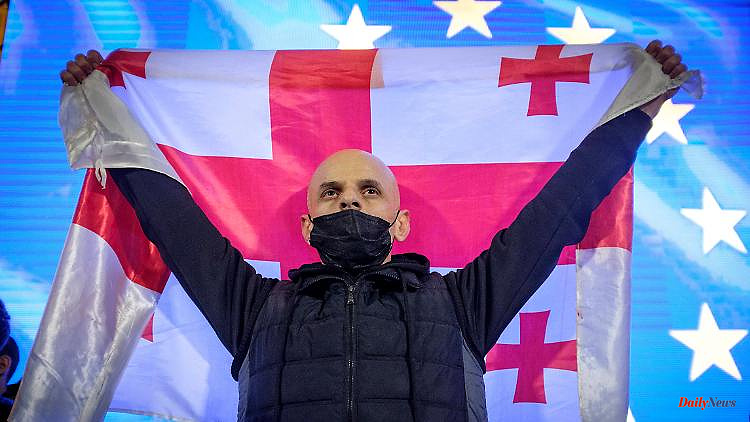 Ukraine and Moldova are to become EU accession candidates. Actually, that was also the wish of Georgia. But meanwhile the government in Tbilisi's striving towards the West has died down, although the majority of the population is in favour. What's going on there?

The Georgian Military Road towards Kazbegi is actually two lanes. But most of the time only one lane is free. Countless trucks are parked on the other side, bumper to bumper. Next to them are men talking, smoking cigarettes, preparing food on gas stoves. Some doze behind the wheel.

Normal traffic rushes past them, constricted, but still as if nothing happened. In a pinch, one lane is enough for two cars. Only a risky overtaking maneuver or one or two cows cause the cars to slow down. The truck drivers are waiting. They are on their way north to Russia. But because the controls at the border are lengthy, they stay here for hours, if not days.

Georgia, this beautiful country with the green meadows, the white peaks of the Caucasus, the Black Sea beaches, the excellent wine and the friendly people, is closely connected to its neighbor Russia. Not only historically and through a variety of private contacts, but also economically. The share of the Russian market in Georgian wine exports in 2021 was 54.8 percent, for example, as the Heinrich Böll Foundation lists in an analysis.

Total Georgian exports to Russia have increased significantly in recent years: from USD 47 million in 2012 to USD 610 million in 2021. This corresponds to 14.4 percent of total exports. There is also a certain dependency on Russian natural gas (23.1 percent in 2021) and wheat (94 percent of the flour comes from Russia). For comparison: according to preliminary figures, 16.8 percent of Georgian exports went to the European Union last year. "Overall, Russia has returned as an important trading partner for Georgia since 2012," the Greens-affiliated foundation sums up.

This "returned" describes quite well why the connection with Russia and Georgia is not always a blessing. And why the country, which is often referred to as the "Balcony of Europe," is tending towards the west, even if only with the handbrake on. Because Russia is not an easy neighbor. Russia likes to attack its neighboring countries.

Georgians know that. In 2008, Russian tanks were in their country. It was a short, violent war. Since then, the regions of Abkhazia and South Ossetia, which have been showing secession tendencies for many years, have been recognized by Russia as independent states. From Georgia's point of view, Russia's war against Ukraine 14 years later looks even more threatening.

The solidarity with Ukraine is all the greater. Blue and yellow flags hang in cafés in the capital, wave on public buildings and are pinned to the lapels of passers-by. "It is also understandable that a large part of the population supports Ukraine, because the situation in Ukraine and Georgia is similar," says political scientist Mikheil Sarjveladze in an interview with ntv.de. What Ukraine is going through right now, Georgia had already experienced in 2008. "This shared pain leads to historical social solidarity."

And the memories of 2008 are still very present, says the Georgian. "People who live near the occupation line to South Ossetia and Abkhazia feel the danger every day. Some civilians are kidnapped there and violence is done to them. The de facto border lines are being shifted by the Russian side and enforced arbitrarily."

Thousands of Russian soldiers are currently stationed in Abkhazia and South Ossetia. The areas are sealed off from the rest of the country. Again and again there are shifts in the boundaries, which international organizations call Administrative Boundary Lines (ABL). Since October 2008, the European Union has maintained an observer mission, EUMM for short. More than 200 people from 26 member states are employed there to drive along the actual border lines, to talk to the local people, to mediate and to avoid an escalation of the conflict.

The security situation is currently relatively stable, explains EUMM press spokesman Klaas Maes ntv.de. "However, we should not take this for granted as there is always some potential for negative developments." The mission's observers regularly reported on "drawing of boundaries" that had a negative impact on the residents. Some of them could no longer drive to their doctor, visit cemeteries or farm their land. "This ongoing process has resulted in nearly impenetrable physical barriers preventing people from crossing the ABL."

As Maes reports, people who try to cross the ABL are often arrested. The EUMM then works with other organizations to ensure that the detainees are released quickly, "since the humanitarian situation is dramatic for them and their families. Unfortunately, this is usually a complicated process."

It is unlikely that this situation will change fundamentally in the near future: "At the moment it is not in Russia's interest to finally integrate Abkhazia and South Ossetia into the Russian Federation," says Mikheil Sarjveladze. "The areas are de facto annexed by Russia anyway." Their independence is guaranteed and funded pro forma. "Although this means an economic loss, Russia can instrumentalize the areas in order to provoke a conflict."

For Moscow, it is about dividing the European continent into zones of influence and creating a Russian-dominated buffer zone made up of states such as Ukraine, Belarus, Moldova and Georgia, the expert explains. Regions like South Ossetia and Abkhazia eventually served as leverage to prevent Georgia's EU and NATO integration.

And in fact, there can be no question of a state-sponsored movement to Europe at the moment. Despite the skirmishes and hardships faced by the populace near the breakaway regions, the ruling Georgian party, Georgian Dream (GT), maintains political and economic ties with Russia. Tbilisi did not join the sanctions imposed by the West as a result of the war of aggression against Ukraine. In response, Kyiv recalled its ambassador.

The government justifies its reluctance to avoid a war in Georgia in this way. "The government has no influence whatsoever on Russia. The Kremlin in Moscow decides when it wants to go to war," says political scientist Sarjveladze. "And I think it's immoral to argue that joining Western sanctions against Russia would cause immense economic damage to Georgia."

Walking down the boulevard Rustaveli Avenue in the heart of Tbilisi, one gets the impression that Georgia has long been part of the EU. EU flags hang naturally on official buildings such as the Parliament. The fact that the Georgian government, together with Ukraine and Moldova, submitted an official application for EU membership shortly after the start of the Russian invasion at the end of February seemed only a formality, especially since polls show that more than 80 percent of the population are in favour.

But as of this Friday, one thing is certain: Only Ukraine and Moldova can hope to actually receive official candidate status in the near future. Only a "European perspective" remains for Georgia, as Commission President Ursula von der Leyen put it. The decision on the candidate status is postponed.

What may seem surprising in view of the flag flying in Tbilisi and the high approval ratings for EU integration did not come out of the blue for experts. "In view of the democratic setbacks in Georgia and the increasingly shaky relationship between the EU and the Georgian government, it was foreseeable that the Commission would treat Georgia more critically than Ukraine and Moldova," writes the head of the Heinrich Böll Foundation's regional office for the South Caucasus in Tbilisi , Sonja Katharina Schiffers, in an email to ntv.de.

The points that the EU wants to see improved in the country include: an end to political polarization, judicial reform, progress in the fight against corruption, an intensified fight against organized crime, ensuring a free, pluralistic media landscape, protection of minorities and the elimination of the excessive influence of the interests of individuals - this refers to the so-called de-oligarchization, the liberation from the corruption-prone oligarchic system.

"The Commission's statement makes it very clear what the Georgian government should do to ensure that the country is granted candidate status after all, and possibly even in the near future," said Schiffers. "With regard to requirements such as productive cooperation with the opposition, better protection of minorities and freedom of the media, positive signals could be sent within a few days." The question arises as to whether the government is really prepared to do this. "Whether the government implements the recommendations and works towards candidate status will depend primarily on how much pressure there is from the population."

Mikhail Sarjveladze is certain that the pressure will increase. But what that leads to in the end, he doesn't know. "I think it is unrealistic for the current government to respond effectively to the demands and solve the problems in the near future." The GT clings to power and pursues its own interests, especially those of its founder, Bidzina Ivanishvili. The oligarch is the richest man in Georgia. According to the Böll Foundation, his personal assets amounted to 30 percent of Georgia's GDP.

"Ivanishvili made most of his money in Russia, and although he is no longer officially active in Russia, Georgia's passive attitude towards Ukraine and its confrontational course towards its Western partners are due to him," says Sarjveladze. "An independent judiciary, which would be a prerequisite for candidate status, is not in the interest of the current government and not in the interest of the oligarch." There is currently no separation of powers, but the judiciary - consisting of a clan of judges - serves the executive and thus the ruling party.

He was not at all surprised that the EU Commission made such a decision. But: "As a Georgian citizen, I am sad and disappointed." Under this government, however, he sees pessimism about his country's European future. And apart from the desire for European integration, there are the real existing threats.

Sarjveladze calls the risk of Russia intervening in Georgia again in the future as realistic. That's why it's clear to the political scientist: "Without solid security guarantees through NATO membership or through a group of Western states that stand by Georgia in the event of an attack, Western integration and thus further democratization is not possible."

Once in Kazbegi, all these considerations seem far away. The view of the Caucasus falls from the famous Trinity Church. Behind is Russia. It is only twelve kilometers to the border. Brussels and Europe are irrelevant when looking at the white mountain peaks - at least for tourists. Many citizens of Georgia, however, wish to finally become a formal part of the European community of values. The question is how long they have to wait for it.

1 Briefing and award: Zelenskyj visits frontline region... 2 After deportation flights were stopped: London clamors... 3 Party of Ostpolitik: "A large part of the SPD... 4 Party determines new board: Chrupalla and Weidel elected... 5 Motion by the parliamentary group: Union calls for... 6 Up to 50 percent of equipment: Ukrainian general admits... 7 "A complex puzzle": BKA investigates Russian... 8 After shelling from Gaza Strip: Israel fires rocket... 9 "FryTheRice" for 2024: Trump's revenge... 10 Palermo's Cosa Nostra: The mafia is back in politics 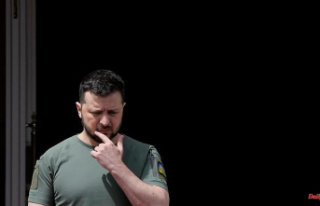