Together with Macron and Draghi: Scholz is on his way to Kyiv by train 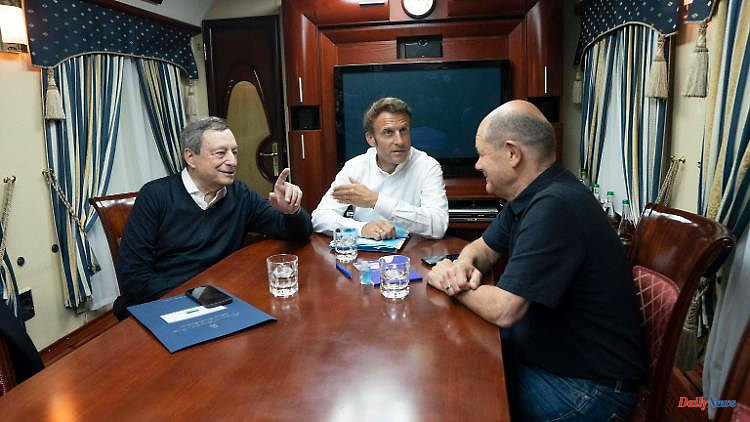 Chancellor Scholz travels to Ukraine. Together with his colleagues from France and Italy, he takes the train to Kyiv. It is meant to be a sign of support after Ukraine previously accused the countries of hesitant support.

Chancellor Olaf Scholz is on his way to Ukraine. Together with French President Emmanuel Macron and Italian Prime Minister Mario Draghi, he is on board a special train bound for Kyiv. The heads of state and government had boarded the train in the eastern Polish city of Rzeszow and are expected in Kyiv in the morning, as the Italian daily "La Repubblica" reported. The Elysée Palace confirmed the start of the journey.

Kyiv has accused Germany, France and, to a lesser extent, Italy of being reluctant to support Ukraine, saying the countries are slow to deliver arms and prioritize their own prosperity over Ukraine's freedom and security.

The visit should now serve as a sign of support for Ukraine, it had been prepared for weeks. Macron said the day before during his visit to a NATO base in Romania: "As the EU, we have to send political signals to Ukraine (...) before the EU summit, which has important decisions to make." At next week's summit meeting, the EU heads of state and government are expected to discuss Ukraine's membership application. A recommendation from the EU Commission on whether Ukraine will be granted candidate country status is expected this week.

The three state representatives are expected to hold talks with the Ukrainian government headed by President Volodymyr Zelenskyy in Kyiv today. The talks will probably be about the course of the war, aid for the country and possible accession to the EU. Scholz had previously emphasized: "I will not join a group of people who do something for a short in and out with a photo session. But if so, then it's always about very specific things." Experts therefore assume that Scholz therefore brings good news for Ukraine.

The Ukrainian ambassador to Germany, Andriy Melnyk, had previously asked Scholz to promise extensive arms deliveries. "Firstly, we want the German head of government to promise in no uncertain terms, without ifs or buts, that he will be granted candidate status for EU membership and to ensure that next week's European Council makes this historic decision unanimously," Melnyk told ntv . In addition, the Ukrainian ambassador said that Ukraine expects Scholz "to jump over the shadow of German hesitancy on the subject of heavy weapons and to give Ukraine a massive helping hand with really all the available resources from the Bundeswehr stocks and the armaments industry". Melnyk called both demands "crucial".

In Kyiv, the main expectation is that Scholz will finally give the green light for the requested 88 "Leopard 1" battle tanks and 100 "Marder" infantry fighting vehicles, which the Rheinmetall group can deliver immediately, Melnyk also told the "Rheinische Post". In addition, Scholz must release heavy weapons from the stocks of the Bundeswehr. "Nothing stands in the way of Germany making a significant part of its own 800 Fuchs transport tanks, 325 Leopard 2 tanks or 380 Marder tanks available to the Ukrainian army in order to crush the Russian troops."

In the medium term, Ukraine will also need German submarines, corvettes, patrol boats and combat boats to defend the long Black Sea coast and eliminate Russian superiority at sea, Melynk continued. This would also guarantee freedom of navigation and food security. Scholz had also been asked by the opposition and politicians from the FDP and Greens to make specific new commitments for the delivery of weapon systems during a visit to Kyiv.

Zelenskyj has also accepted an invitation from Scholz to the G7 summit. He will also attend a NATO meeting, the invitation came from Secretary General Jens Stoltenberg. It is not yet clear whether Zelenskyy will leave Kyiv or join via video. 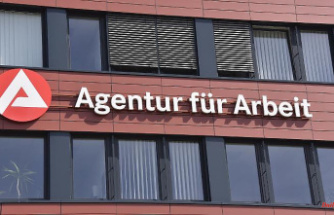 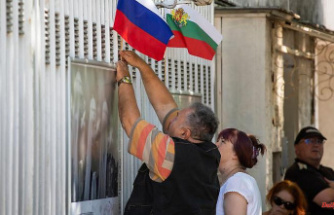 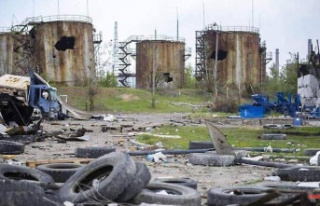