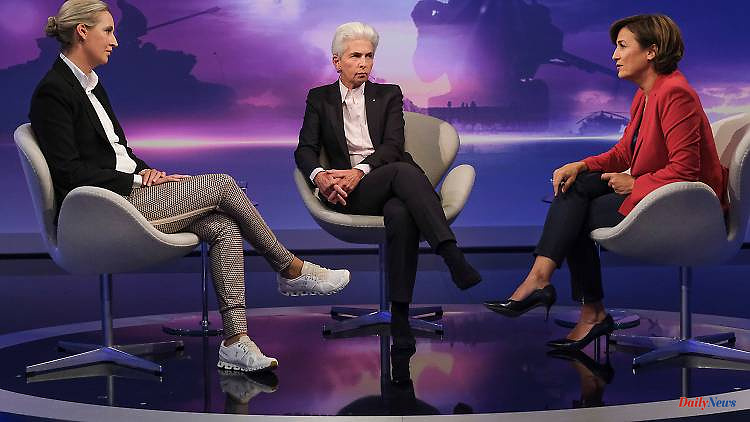 Sandra Maischberger invites Alice Weidel to discuss the Ukraine war. In addition, Marie-Agnes Strack-Zimmermann is a woman whose position on the subject is well known. The AfD boss counters them properly.

It's Tuesday evening, just before midnight. In the ARD program "Maischberger" the FDP defense expert Marie-Agnes Strack-Zimmermann and the AfD co-boss Alice Weidel meet. It will be quite an entertaining exchange of blows, in which the moderator is the only one who exudes serenity. The opponents obviously find it difficult to listen to each other. Strack-Zimmermann interrupts Weidel more often than the other way around: four times she is called to order by the moderator, the AfD politician once. In this situation, however, Weidel does not seem very confident and is constantly thrown off course by her opponent.

At the end of the discussion, Strack-Zimmermann will make a comment that, while meant to be funny, seems a bit out of place in the current crisis. It's about compliance with the debt brake, which Strack-Zimmermann defends: it's in the constitution and it's very important. "Especially in these extreme times, you should be careful not to override all the rules," says the FDP politician. Weidel is also in favor of the debt brake. However, she fears that the federal government's aid packages cannot be financed with this instrument. That's why she says: "Of course we need the debt brake. But of course you will break it." Strack-Zimmermann replies: "I don't know who's breaking tonight, but not at this point."

In the afternoon, three AfD members of the state parliament from North Rhine-Westphalia and Saxony-Anhalt announced that they would cancel a planned trip to the Russian-occupied Donbass region. Strack-Zimmermann speaks of a "coffee trip" at Maischberger, and Weidel does not seem to be satisfied either. According to their own statements, the politicians wanted to obtain objective information about the situation in the war zone. She doesn't think this suggestion is appropriate, says Weidel. "When you travel to a war zone, you are only ever presented with subjective truths." The party leadership was able to convince the deputies "that it doesn't make much sense." The party was not informed about the trip.

Meanwhile, Strack-Zimmermann is again in favor of further arms deliveries to the Ukraine. "If we don't stop Russian President Putin, politically and militarily, the next thing he will do is go to western Ukraine, and at some point it will be the Baltic States. It's over now."

"You want to turn Germany into cannon fodder with your line, and you can't take that line," Weidel replies - and a little later accuses the FDP politician of representing her own interests as an arms lobbyist by demanding more and more weapons from Ukraine. "I don't know where you took a wrong turn in your life, but that's clearly the case," Strack-Zimmermann replies. And the moderator explains that the chairwoman of the Bundestag Defense Committee is only a member of a registered association that promotes the army.

But it's not that simple: According to the "Lobbypedia" website, Strack-Zimmermann and numerous other members of the Bundestag are members of the association "Förderkreis Deutsches Heer" (FKH), Strack Zimmermann even sits on the presidium. Member companies of the support group also support political parties with donations, totaling 3.7 million euros between 2005 and 2010. Lobbywiki complained that the FKH would give the armaments industry "privileged access to people who decide on the amount of the defense budget and the approval of large-scale military projects."

Strack-Zimmermann also wants the war to end, but she currently sees no room for negotiations with Russian President Vladimir Putin. Weidel sees it differently, but her argument does not seem very well thought out. It is the task of the federal government to engage in negotiations with Putin. However, she could only do that if she were a neutral partner. But it is no longer because Germany is supporting Ukraine with weapons.

Finally, there are also different opinions on the sanctions against Russia: Weidel wants to end them immediately because they harm the people in Germany, Strack-Zimmermann doesn't. She refers to a survey in which the majority of Germans voted in favor of maintaining the sanctions. And she points out: "They will also affect Russia. They will have a massive impact on life and the economy there."

1 After being transported to Nobel Island, migrants... 2 Weidel bei Maischberger: "You want to make Germany... 3 It is important to stick to the gas levy: Eon warns... 4 Financing needs higher after all?: Possible Uniper... 5 "I'm not dead": Roseanne Barr returns... 6 Orientation for the housing market: The best real... 7 Saxony: Supporters collect donations after a fire... 8 Saxony: WWII bomb defused in Leipzig 9 Saxony: 86-year-old dies in a car accident: health... 10 North Rhine-Westphalia: Leak in the gas tank in the... 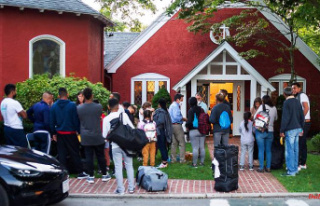 After being transported to Nobel Island, migrants...