The general debate in the Bundestag is emotional - a pointer to the tense situation in the country. 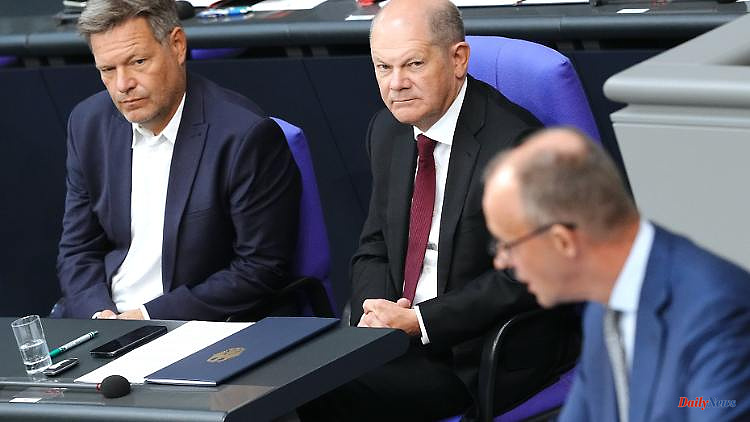 The general debate in the Bundestag is emotional - a pointer to the tense situation in the country. The Union has clearly decided to give the stumbling Minister of Economic Affairs Habeck a few nudges. But the chancellor is also in attack mode.

The Bundestag is back from the summer break, and right on the second day of the session, the scheduled general debate comes up with a small bang. The representatives of the government and opposition exchanged blows passionately and quite personally, which reflects the tense overall situation in Germany. The furor of the opposition leader Friedrich Merz, who opened the debate and who hit Federal Minister of Economics Robert Habeck in particular, should come as a surprise to the MPs on the Green benches. Is this the same Union faction leader who chatted long and loosely with his hostesses at the Green faction's summer party the night before? "In economic policy, the federal government lacks any ability to think politically and strategically," stated CDU chairman Merz before the packed plenum, including all cabinet members on the government bench.

Habeck is, as in the speech by CSU regional group leader Alexander Dobrindt, in the sights of the Union. He had recently stumbled with design errors in the gas levy, had controversially announced his decision to end nuclear power soon and now also made an appearance on the "Maischberger" show, which caused waves on social media. He failed to explain that companies don't necessarily have to go bankrupt even if they don't operate in winter if the state helps them through the period of high costs - at least. A template for Merz: "You could see how helpless you are in these questions yesterday on German television." The Union faction hoots, scolding from the seats to the left. Merz attests Habeck a "remarkable ignorance" of what the real problems of the company are.

Habeck's TV blunder the night before is just the surprising icing on the cake for Merz, because it's actually another topic with which the Union faction leader wants to scratch Habeck's aura of a popular minister: the decision to put two of the three remaining nuclear power plants in the emergency reserve by mid-April and to let the third one, Lingen, go off the grid by the end of the year as planned. Both with the hard coal parked in the emergency reserve and with the nuclear power plants, the Green Economics Minister shows a "blockade attitude towards other forms of electricity generation", although everything on the supply side has to be mobilized in order to meet the demand and thus lower electricity prices.

Because the general debate is traditionally linked to the debate on the Chancellor's budget, Habeck cannot defend himself. It is up to Olaf Scholz to respond to the opposition leader's allegations. And his speech is somewhat remarkable because Scholz spends a lot of time reading Merz and/or Union the Levites. The Chancellor often regards such banter as a minor matter and prefers to present himself as a quiet clerk. But today there is something sour: "You are talking about the topic and the problems of this country, that's really the big problem," Scholz attested to the CDU chairman . "And if others solve the problems that you haven't even recognized, then talk around it." The Twitter accounts from the SPD bubble, which are striving for interpretation sovereignty in the social media, are almost glowing in the face of a chancellor who is "on fire" today.

For Scholz, it is a question of justice to list again at this point what the government has done and how much it was ahead of the situation at all times. Scholz does this at every opportunity because, in his opinion, the government is obviously not sufficiently praised by anyone else, but this time it links the list to attacks against Merz. "We solved problems, you didn't even realize they existed," he said. If the government hadn't delayed the expansion of renewable energies in 16 years instead of making Germany dependent on Russian energy, the situation would be different now. "A party that fights almost every wind turbine personally has nothing to do with the question 'How do we solve the energy problems of the future'," says Scholz.

At the end of his speech, a smile crosses his face, which reveals some satisfaction with the pointed and verve delivered speech. The fact that Scholz still cannot do without his routine formulations such as the eternal "hooking" and the promise "You'll never walk alone" does not detract from that. He sets a tone that the Greens parliamentary group leader Britta Haßelmann and FDP parliamentary group leader Christian Dürr also strike: They sharply criticize Merz's speech and the achievements of the Union in the past.

After weeks in which the traffic lights argued about the design of the third relief package, the Union's attacks welded the traffic lights together again. "It will hit a lot of people hard, we know that, and we are far from finished with these support packages," Haßelmann dismisses Merz's accusation of ignorance. "Economically, you're going wrong," Dürr accuses the Union faction leader. The Union's proposals, such as the energy price cap, are unrealistic. Using tax revenue to cap the price of basic consumption "would overwhelm the state community".

CSU regional group leader Dobrindt also picks up on Habeck's TV appearance. "People don't give a damn what you call it when they become unemployed," Dobrindt reaches into the somewhat deeper vocabulary subject. "But they care if you don't do something about it." The Union sees every reason to dismantle the image of Habeck as a doer. According to Dobrindt, with a view to his spring trip to the Emir, the Federal Minister of Economics "didn't bring a single cubic meter of gas from Qatar, but heaps of sand were thrown in people's eyes".

Beyond the Union, there are two other opposition parties that sense a chance of fresh wind under the wings because of the tense economic situation and general inflation concerns: AfD and Linke. "Countless citizens are threatened with impoverishment, the middle-class economy with collapse, and state finances with permanent disruption," warns AfD faction leader Alice Weidel. Once again she paints an inescapably apocalyptic picture of the near future. Perhaps given the drastic situation, Weidel would have provoked more horror if she hadn't said "the end is near!" in almost every speech for years. called - mutatis mutandis.

Left faction leader Amira Mohammed Ali concentrates entirely on the situation of the poor and low-income earners in the country. Two million people are dependent on food donations from the Tafel, although the Tafel can allocate less and less to the individual needy due to growing demand. "Are you standing there and saying 'you'll never walk alone'?" Mohammed Ali takes up the chancellor's slogan. She leaves no good hair on the third relief package. "Food prices rose by 20 percent last year, and the increase in child benefit isn't even 10 percent," says the left-wing politician. She doesn't like the duel between Merz and Scholz. "They worked a good part of the time on Friedrich Merz to show who is the better pike here," complains Mohammed Ali. The Scholz fans in the hall might like that, "but it's not appropriate to the situation in the country". 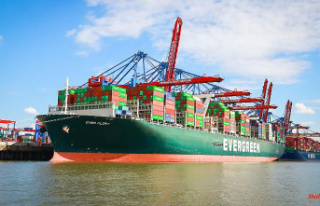