War could last for years: Ukraine and Russia are fighting in a dead end

Russia has been at war with Ukraine for six months. 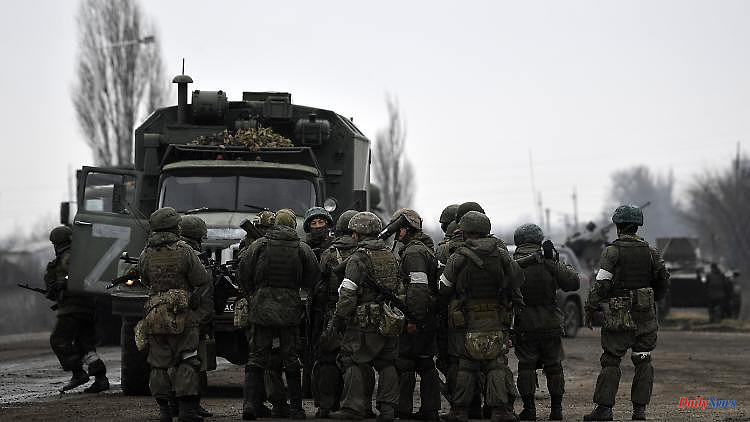 Russia has been at war with Ukraine for six months. According to the Kremlin, the "special operation" is going according to plan. However, the Russian Internet portal Meduza speaks of "combat operations in a dead end". The whole thing could drag on for years - with fatal consequences.

After six months of war against the Ukraine, the Russian troops are only making slow progress - and also have to put up with spectacular counterattacks. This is not how President Vladimir Putin could have imagined the course of the war when his tank troops crossed the border on February 24th. Within hours, the security policy structure in Europe changed: NATO activated defense plans for Eastern Europe on the same day, EU sanctions packages were approved and then a "turning point" with 100 billion euros for the German armed forces.

Governments and military experts who initially predicted that Ukraine would be defeated within weeks were wildly wrong. Meanwhile, the situation resembles a bloody stalemate. According to diplomats, this could turn into a war that will last for years, with further serious atrocities and terrible crimes against the civilian population.

The Russian units make little progress. They did not prevent the defenders from regrouping during advances into Ukrainian-controlled areas, as military experts from the Institute for the Study of the War in the USA have reported. And: "The Russian forces will probably still not be able to provide enough resources for individual offensives, as they are necessary for significant territorial gains, which will become an operational success."

The leadership in Kyiv, supported by the West with billions and heavy weapons, has promised the population that the Russian attackers will be expelled. "We drove the Russian army out of the northern regions. We expelled the occupiers from our snake island. They already feel that it's time to get out of Kherson and in general from the south of our state," promised President Volodymyr Zelenskyy in mid-August. "The time will come when they will disappear from the Kharkiv region, from the Donbass, from the Crimea ..."

Nevertheless, Zelenskyy had to admit that around 20 percent of the country's territory - including Crimea - is no longer under Ukrainian control. Claims continue to come from the Kremlin that everything is going according to plan. The goals of the "military special operation", as the war is officially called in Russia, would be fully achieved. "Without doubt." What exactly the goals should be is no longer clear to many Russians either. The sanctions are hitting their economy hard. NATO, which should be pushed back, is instead on the rise: Finland and Sweden are now also joining the military alliance.

The vast majority of Russians ignore the war. As commander-in-chief, Putin keeps talking about the goal of "liberating" the Donbass. The images of death and destruction, which many Russians are familiar with despite blocked websites and censorship in the state media, cast doubt on the sense of the invasion. The Donbass includes the Luhansk region, which Ukraine no longer controls, and the Donetsk region, where Moscow has captured just over 60 percent of the region for weeks without any noticeable progress, according to independent Russian experts.

But the Kremlin has not made any clear statements about what will happen to the conquered parts of the Cherson, Kharkiv and Zaporizhia regions. "Referendums" on accession to Russia are discussed again and again, without a date being set. According to an analysis by the expert Andrei Pertsev, the entire "operation" is well behind schedule. Moscow keeps misjudging the situation. "They hope in the Kremlin that the Russian armed forces will take the Donetsk region completely by December/January without losing control of the already occupied territories," Pertsev wrote for the Meduza Internet portal. Russian MPs and the military emphasize that the entire south should be separated - including the port city of Odessa. But the Kremlin does not confirm this.

A Russian corridor to the ex-Soviet Republic of Moldova would lose Ukraine's access to the Black Sea and make it landlocked. But even many Russians are aware that nothing is going as it should. Cities and regions are posting calls to join so-called volunteer battalions. But the supply of personnel for the front is not coming together, as even Russian newspapers openly write. In addition, members of the security organs sometimes resist going to war in court.

By Russian standards, the monthly income is relatively high, at 100,000 rubles (around 1,700 euros) and more. Prisons are also recruited - with the promise of a later life in freedom. Again and again there are reports that the businessman Yevgeny Prigozhin, who was put out by the USA and also subject to sanctions by the EU, is looking for fighters in the penal camps. The man with good connections to Putin is considered the financier of the internationally active mercenary group "Wagner", which is blamed for many war crimes.

After half a year, the Russian Internet portal Meduza sees a stalemate in a major analysis. "Combat operations are at an impasse, but freezing the conflict is not good for either Moscow or Kyiv." Nobody wants to give in and be a loser. "Their political agendas are leading both sides to up their ante for an even bigger war." Putin recently said that Russia hadn't even really got started.

The vast majority of Russians are convinced that he will do everything to avoid defeat. With a general mobilization, the head of the Kremlin could turn the "military operation" into a right war for Russia, which he would then have to call that. The concern that he could seek an escalation with the NATO countries in the Baltic has not yet been confirmed.

The alliance is capable of cold starts and is ready to defend itself, said German Lieutenant General Jürgen-Joachim von Sandrart, commanding general of NATO ground forces in north-eastern Europe and thus also responsible for the border areas with Russia, Belarus and Ukraine. "The processes are defined. If there is an attack, the military will react immediately," explained Sandrart in a video interview with the Bundeswehr. "And every attack is immediately answered militarily and also repulsed."

1 The majority are women and children: almost 970,000... 2 After criticism of party videos: Sanna Marin publishes... 3 Hunger lines and danger to life: Animals suffer considerably... 4 Sustainability and veganism: Great honor for Billie... 5 Ex-Bachelor in the jungle camp ?: Andrej Mangold is... 6 Pandemic was yesterday: who is still talking about... 7 (Almost) an interview with kangaroo: Conspiracy myths... 8 Even shorter than Emma Watson: Ireland Baldwin shaves... 9 Half-siblings for Alessio: Lombardi becomes a father... 10 Separation after 21 years: Marriage at Helmer and... 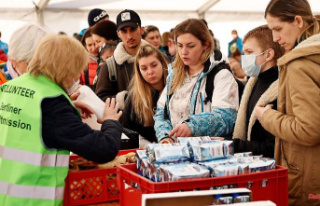