Agriculture in space: Plants grow for the first time on "Monderde"

The colonization of space is the dream of many people. 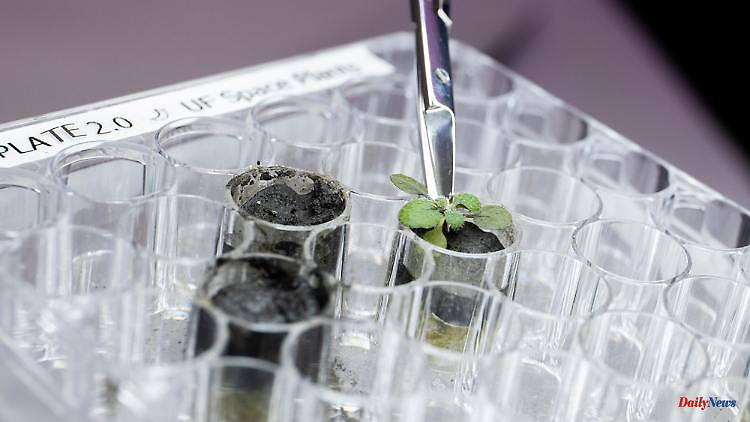 The colonization of space is the dream of many people. But there are numerous hurdles, such as the replenishment of food. One possible solution: farming on the moon. Researchers are now showing that plants do thrive in lunar soil - albeit with limitations.

This study could go down in the history of space travel: For the first time, researchers have grown plants on real lunar substrate that astronauts had brought from the Earth companion. They used this to investigate whether agriculture would be possible on the celestial body in the future. The team from the University of Florida in Gainesville reports in the journal Communications Biology that plants could in principle grow on "Monderde". However, their growth was stunted and the plants were showing severe signs of stress.

For Urs Mall from the Max Planck Institute for Solar System Research in Göttingen, the study contains "undoubtedly interesting observations". However, there are still many unanswered questions, says the moon expert, who was not involved in the study.

The cultivation of plants on the moon would be of particular interest for NASA's Artemis program: the US space agency wants to bring people to the moon again for the first time since the Apollo 17 mission in 1972 and set up a base there - if possible by the end of the decade . In this project, plants could not only simplify the crew's diet, but also produce oxygen, for example. "You want a closed cycle where everything is recycled," explains Mall, referring, among other things, to the carbon dioxide emitted by humans. "Plants would play an important role in this cycle."

"Artemis requires a better understanding of how plants grow in space," explains co-author Rob Ferl. "For future, larger space missions, we could use the moon as a hub or launch pad. So it makes sense to use the soil that is already there to grow plants."

The researchers are now checking whether this would even be possible on the loose material on the moon. This so-called regolith was formed by the intensive bombardment of the moon with meteorites. Over the millions of years, the impacts shattered rock and crushed it into a kind of sand that sometimes covered the surface of the Earth's satellite several meters high. The decisive difference to terrestrial soils: "On earth, soils are biologically influenced," says Mall, referring to plants, animals and microorganisms. "That's missing on the moon."

For the study, the team only had a total of about 12 grams of lunar material that Apollo 11, 12, and 17 had brought back to Earth from their respective landing sites. The material was sieved to a grain size of less than one millimeter, provided with rock wool and an aqueous nutrient solution and placed in mini containers at 0.9 grams each. The researchers then placed seeds of the thale cress (Arabidopsis thaliana) on the substrate. This plant, which is also widespread in Germany, is used in biology as a model organism, partly because its genome has been completely sequenced.

First, all twelve seeds germinated. "We didn't predict that," says first author Anna-Lisa Paul. "This showed us that lunar soils do not disrupt the hormones and signals involved in plant germination." However, problems quickly became apparent that did not occur with the control plants in terrestrial substrate that resembled the lunar material: the plants grew more slowly, remained smaller, discolored and varied greatly overall.

The researchers interpret all of this as a sign of stress. Further analysis revealed that gene activity was similar to that of plants exposed to unfavorable factors such as salt, metals or oxidative stress. "From this we deduce that the plants perceived the lunar soil conditions as stressful," says Paul.

However, the team registered noticeable differences between the various lunar substrates: Plants thrived the worst on the material that Apollo 11 had brought to Earth. Unlike the Apollo 12 and Apollo 17 sites, the lunar regolith at this landing site is older and has therefore been exposed to cosmic rays and the solar wind longer. These streams of charged particles constantly patter down on the lunar material and enrich it with hydrogen and helium ions in particular.

Overall, according to the research group, plants can certainly grow on "moon soil", but this is basically not a good growth environment. "The data suggest that older regolith provides an inferior substrate for plant growth than younger regolith," the team writes. The plants thrived best on the material brought back by Apollo 17.

The study leaves many questions unanswered, says Mall. In particular, it remains unclear which components of the lunar material were responsible for the problems affecting the plants. "There are many factors that can play a role." The authors themselves also point out these weaknesses: Before lunar regolith can be used as a local resource for plant cultivation, this material must be better characterized and optimized.

1 Researchers take the first picture: This is what the... 2 Fast-paced handwork competition: McLaren 765 LT Spider... 3 The neverending story?: The eternal struggle between... 4 The slightly different hybrid: Renault Scénic comes... 5 Used car check: Toyota RAV4 - big and reliable 6 The end for entry-level models: Mercedes wants fewer... 7 M RR 50 Years M: BMW M 1000 RR als Jubiläumsmodell 8 Inside like an iX: BMW refreshes the 3 Series 9 Slowed down a bit: Opel Astra - does it have to be... 10 How secure are radio keys?: Keyless function makes... 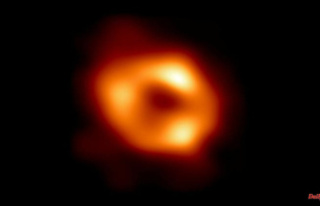 Researchers take the first picture: This is what the...