Ralf Rangnick has proven at 1899 Hoffenheim and RB Leipzig that he can lead clubs upwards with a hell of a lot of money and just as much expertise. Ralf Rangnick has proven at 1899 Hoffenheim and RB Leipzig that he can lead clubs upwards with a hell of a lot of money and just as much expertise. As Austria's national coach, he is now facing a completely new, much more complex challenge.

The starting point for new heroic deeds didn't really fit Ralf Rangnick's big plans. In the rather tranquil Bad Tatzmannsdorf in Burgenland, known for its sparkling medicinal water and variety of saunas, the 63-year-old held his first sessions as Austria's national soccer coach. He wrote autographs for excited school children, posed patiently for photos, and was close to the people. He talked a lot with his players and the media. One sentence in particular stuck: "It's been a long time since Austria drew attention to itself with heroic deeds."

That's why Rangnick is here now. With his meticulous and uncompromising way of working, he should trim number 34 in the world rankings for success again. "There are countries like Denmark, Switzerland, Wales, Sweden and Iran ahead of us. I don't know if it has to be like that." And above all, he wants to emotionalize. "There's always something to do with entertainment. Games should never be boring, they should excite viewers in the best sense of the word." Even his debut has it all. On Friday (from 8.45 p.m. on DAZN and in the live ticker on ntv.de) Austria will play vice world champion Croatia. This is followed by games against Denmark, world champions France and again in Denmark at the end of the Nations League block. After that, Rangnick should know how much work he actually has to do.

In any case, the players are delighted. "In my opinion, he's the best Austria could get," Hoffenheim's Christoph Baumgartner told Kicker. The midfielder Konrad Laimer from RB Leipzig sees it very similarly. Rangnick is "a very ambitious person who wants to have maximum success. I am very confident that we will have a very successful time." And free spirit Marko Arnautovic also wants to subordinate himself to the system of football professor Rangnick. "I do what the coach asks me to do. I'm not someone who says, 'Stop, stop, I'll do what I want.'"

The liaison between the Alpine nation and Rangnick is an opportunity for both sides, perhaps even a little bigger for the coach. Because after his - for whatever reason - failure at Manchester United, Rangnick wants to show his critics. In the past few years, he had been labeled as the man who made billionaire dreams come true in Hoffenheim and Leipzig and led two emotionless constructs to the Bundesliga.

Irrespective of the fact that the success was also achieved through Rangnick's expertise, the ambitious Swabians should be burning on their nails. With Austria he can now show that he doesn't need transfers and can be successful with the existing players. While former internationals like the former Bundesliga coach Peter Pacult complained that Austria's national coach is coming from abroad for the third time in a row, the players reacted consistently positively (see above).

His own past may have played a role in the decision for the job. As in Leipzig, Rangnick is also revered in Salzburg. There he created structures from which the national team still benefits. He stands for that aggressive "Red Bull football" that was practically invented in Austria. So the expectations are high for someone who, until recently, was still coaching five-time world footballer Cristiano Ronaldo. Rangnick actually wanted to work as a consultant for Manchester until 2024, but he now refrains from this double function.

The core of the team with players like Laimer, Marcel Sabitzer, Maximilian Wöber or Xaver Schlager has a Salzburg past (or present) and knows the "Ralfball", Rangnick's game idea trimmed to long balls and merciless counter-pressing. Because Austria missed the Winter World Cup in Qatar under Franco Foda, Rangnick has long thought that miracles cannot be expected at the beginning. Sports director Peter Schöttel said, slightly euphoric, that Rangnick should not only be good for the national team, but for "the whole of Austrian football".

Salzburg provides the blueprint for the national team, so to speak. When Rangnick played in the city of Mozart in 2012, Austria was 19th in the UEFA club rankings. Today they are eighth and have a regular starter in the Champions League. "I don't see why a similar development shouldn't be possible with the national team," said Rangnick. In any case, he sees more opportunities than risks with the team. This should also be the case for yourself.

1 French Open: Gauff vs. Swiatek: Super talent meets... 2 From the second row: Harry and Meghan remain in the... 3 "Tested positive for Covid": Prince Andrew... 4 Hesse: The left wants care for people without health... 5 Largest memory is empty: how Rehden becomes independent... 6 Uncertainty in the portfolio: how to deal with Russian... 7 War goals in Ukraine: what do the Russians want, what... 8 Cognin/Jacob-Bellecombette. He is irritated by the... 9 Formula 1. 26 years ago, Jean Alesi beat Michael Schumacher... 10 Bavaria: Erlangen Bergkirchweih for the first time... 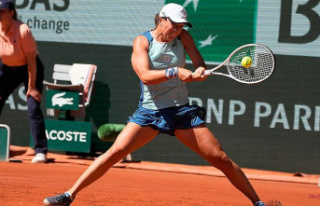