Back on the training ground: Alexander Zverev is happy about "good news"

After his serious injury at the French Open, Alexander Zverev took the next step back into competition: Germany's best tennis professional is back on the training ground and "really has no pain at all".

After his serious injury at the French Open, Alexander Zverev took the next step back into competition: Germany's best tennis professional is back on the training ground and "really has no pain at all". To this end, he announces an important commitment.

The German tennis Olympic champion Alexander Zverev still has to worry about his participation in the US Open. "It's still too early, I've played tennis for the first time now," said the 25-year-old in an interview with RTL / ntv after the first light training on the court. He had just played tennis "very, very carefully" for the first time, emphasized the Hamburger and added with a view to the important tournament from August 29th to September 11th in New York City: "To play in a Grand Slam is it's still a long way off, let's see how that will work."

Zverev twisted his right foot in the semifinals of the French Open against Rafael Nadal on June 3 and tore all three lateral ligaments in his right ankle. Then he had an operation. During his first training session he "really had no pain at all", he said: "Of course I moved very carefully, I haven't put any pressure on my foot yet, but it's just good news that I really don't have any pain had - now we can look further!"

For the finals in September, the group phase of which the German team will contest in Zverev's hometown of Hamburg, the second in the world rankings is much more optimistic: "Davis Cup, sure, I hope I'm 100 percent fit," he said RTL / ntv facing the team competition.

Zverev had made his diabetes public in the morning and announced that he wanted to help affected children and their parents in particular with the help of his newly founded "Alexander Zverev Foundation". "I want to make medicine and essential things like insulin available to different countries and areas of the world where unfortunately they don't have it. There are many countries in Africa and Asia where people can't get the medicine they need," said Zverev, who has had the disease himself since he was four years old.

Type 1, as with Zverev, has not yet been cured, so those affected have to inject insulin for the rest of their lives. "Unfortunately, if a child in Africa gets diabetes, it's still dead within a few days. I want to change that. I want everyone, no matter where they are in the world, to be able to live with this disease , you can have a happy life with this disease and for that you just need the necessary medicine. We are just at the beginning, but it is very nice. You are doing the work for others and for the health of others. It is a very nice feeling for me and everyone involved."

It had long been suspected in the tennis scene that Alexander Zverev had diabetes, but so far the second in the world rankings has avoided commenting on it. On the contrary, Zverev had reacted at least evasively to corresponding inquiries several times in the past. "I never wanted to bring it up, never wanted to talk about it, simply because I've never felt comfortable." Now he has reached a point where he can talk about his illness. "It's always a question of how you're feeling. I've never been comfortable with this disease myself because at school others made fun of me and my devices. Now I've arrived at a time where I have a am a personality who has already achieved a lot where I can say that I can be an example for other children.

1 Interview with UFC champion: Jiří Procházka: "Title... 2 F1 Drivers' Circus Report: McLaren ejects Ricciardo... 3 'I really need to lose weight?': 'Friends'... 4 Time out from everyday life: how holidays work - and... 5 “In the end, that would be another accident on the... 6 Austria wants to pursue hate online more closely 7 Corona pandemic: After the death of a doctor: Austria... 8 Corona: "You can lie and cheat, that's the... 9 Festival: Small festival in the big park is a crowd... 10 Bundesliga: Well-known Berlin derby pattern: Union... 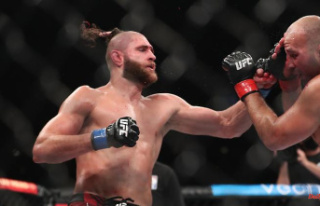