Bronze for Schröder and Co.: Basketball players celebrate the greatest success in 17 years

The German national basketball team keeps it exciting for a long time: In the game for third place at the European Championships, they win against Poland in what was initially a sovereign, then suddenly extremely exciting duel. 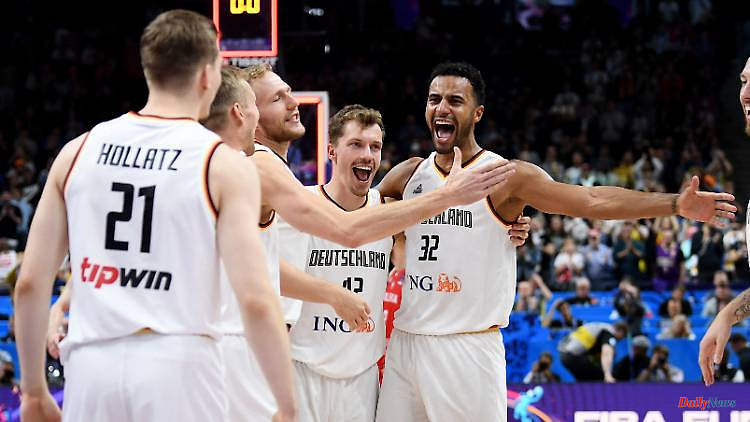 The German national basketball team keeps it exciting for a long time: In the game for third place at the European Championships, they win against Poland in what was initially a sovereign, then suddenly extremely exciting duel. Bronze is the first medal in 17 years.

Superstar Dirk Nowitzki treated himself to a glass of sparkling wine after the bronze coup, leader Dennis Schröder went straight to his retired predecessor Robin Benzing: The German basketball players won a medal at the European Championships at home, ending a 17-year lull. Immediately after the 82:69 (36:23) victory over outsiders Poland, the party began in the well-attended arena in Berlin. "It's really cool. I think it's nice that we were rewarded for a great six or seven weeks. It was really fun," said young NBA star Franz Wagner about the coup.

With 26 points, Schröder led the hosts to bronze and their first podium finish since 2005, when Nowitzki and Co. won silver in Serbia. Schröder, Wagner and Co. received their medals immediately and before the final, and the new captain in particular was celebrated by the audience after difficult years and shouted "MVP! MVP!". Benzing said on RTL: "I'm very, very proud of the boys, they've all grown and matured, like my children, I'm very proud of them."

Daniel Theis celebrated the coup with his kids and the official mascot, the entire team came together on the podium for a jubilant photo before the bronze heroes with their medals around their necks euphorically said goodbye to the dressing room. "We had hoped for a bit more, but I think we can be super satisfied and super proud. The medal also belongs to Robin a bit," said Andreas Obst, referring to ex-captain Benzing. Wagner said cheekily: "The sky is the limit."

The ninth German EM game in 18 days was marked by struggle and cramps over long stretches, but that didn't matter. In front of an official audience of 12,913, including long-time leading player Benzing, the Poles in particular seemed exhausted and overplayed. Germany still struggled at first and only really got going just before half-time.

In contrast to the basketball festival evenings against Greece (107:96) in the quarterfinals and Spain (91:96) in the semifinals, the atmosphere in the arena was a bit more subdued this time. A piece of basketball euphoria had arisen in Germany in the past few days - also because RTL broadcast all three German games on free TV from the quarterfinals onwards.

The medal coup in his first tournament is to be credited to national coach Gordon Herbert. The 63-year-old has had to contend with many adversities since taking office a year ago: he contested the World Cup qualifiers with a B-Team, and there were also no solid components for the home European Championships, such as Maxi Kleber, Moritz Wagner or Isaiah Hartenstein. But Schröder carried the functioning collective into the semi-finals and thus further than the NBA stars Nikola Jokic (Serbia), Luka Doncic (Slovenia) and Giannis Antetokounmpo (Greece) their teams, which were traded much higher at the beginning.

In order to leave the European Championship happily and proudly, the small final had to be won. "I hope that the boys will reward themselves today," said Ingo Weiss, President of the German Basketball Association (DBB) before the game. Head coach Herbert relied on the same team that narrowly lost to Spain on Friday evening. "It wasn't just the physical recovery that was important, but also the mental one," said Herbert on RTL. He also blamed himself for the defeat in the semifinals.

The game against Poland was initially characterized by a lot of lack of concentration and mistakes. Symbolically, there was a free dunk by NBA professional Daniel Theis, who didn't put the ball in the basket, but carelessly put it on the ring. Captain Schröder, who was so strong in the tournament before, also needed some time to warm up, but was again Germany's top pitcher at half-time with twelve points.

His predecessor Benzing sat in the front row and kept clapping good actions. "The boys all greeted me before the game, so pee came into my eyes," said the 33-year-old at Magentasport. The sorting out in August did not go peacefully, but Benzing was back in time for the medal game - at least as a spectator and fan. Of course he was disappointed, but he watched all the games, Benzing added.

Johannes Voigtmann said after a mixed half, which still ended with a 13-point lead: "Defensively, we benefit from the fact that the Poles don't score much either. But overall the defense is okay." Theis made it clear that a lot is about the mental side. As in the 54:95 against France in the semifinals, the exhausted Poles didn't have much to worry about at first. But then the Herbert team suffered a blatant slump, Poland equalized to 59:59. But then the German three-pointers finally fell and the medal party for Schröder and Co. could begin. "I would never have dreamed that I would be there with a medal," said Obst. 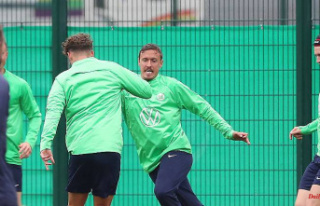