Busy Munich, drama at BVB: FC Bayern stumbles into the crisis with an embarrassing bankruptcy

What is going on there? After beating Barcelona in the Champions League, the bitter reality of the Bundesliga caught up with FC Bayern. 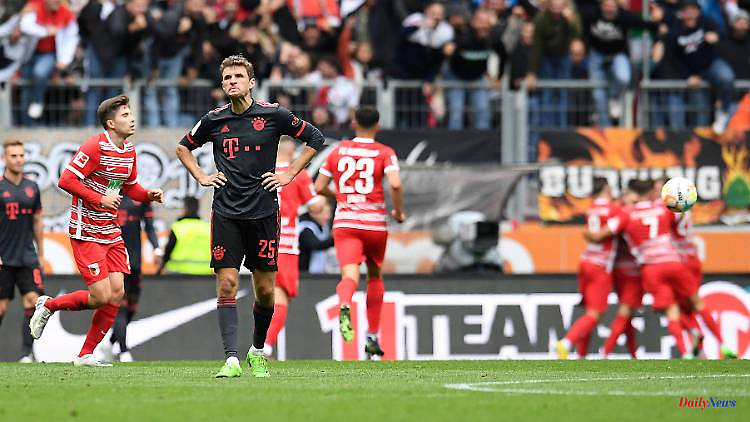 What is going on there? After beating Barcelona in the Champions League, the bitter reality of the Bundesliga caught up with FC Bayern. After three draws in a row, this time there is even an embarrassing defeat in Augsburg. BVB wins the district derby against Schalke late, Werder comes back.

Derby bankruptcy at the start of the Wiesn: Bayern Munich continued its earnings crisis in the Bundesliga and conceded the first defeat of the season. In the Bavarian duel with FC Augsburg, coach Julian Nagelsmann's team surprisingly lost 0-1 (0-0) after another poor conversion of chances and went into the international break with a lot of frustration.

Mergim Berisha (59th) scored the golden goal for the outsider. Bayern goalkeeper Manuel Neuer could have equalized with a header (90.5), but just missed. Bayern, who were without a goal for the first time in 87 games in the Bundesliga, spoiled the mood for their traditional team outing to the Oktoberfest on Sunday. Four days after the 2-0 win in the Champions League against FC Barcelona, ​​Bayern couldn't get through against a strong Augsburg team.

Enrico Maaßen's team successfully stood up to the record champions throughout the season and was able to celebrate the first points in front of a home crowd this season. Nagelsmann didn't want to hear anything about possible celebrations on Sunday before the game, after all the "football quality is more important than every Oktoberfest visit". In return, the 35-year-old brought in Noussair Mazraoui, Leon Goretzka and Matthijs de Ligt for Benjamin Pavard, Marcel Sabitzer and the injured Lucas Hernandez in comparison to the Barca game. Maassen, on the other hand, left his team unchanged after the 1-0 win in Bremen.

It paid off. With their aggressive and intense style of play, the Augsburgers put up a good fight against Bayern. In addition, as in the past, minor mistakes crept in at the Munich team, which also inhibited their own flow of the game. Big chances like those of Leroy Sané (17th), who failed free-standing due to the strongly reacting Augsburg goalkeeper Rafal Gikiewicz, were initially scarce.

The actions in the penalty area increased from the middle of the first half - for both teams. However, FCA's Florian Niederlechner (24'), Iago (26') and Maximilian Bauer (38') as well as Jamal Musiala (33') and Goretzka (37'/44') either missed the goal or were denied by the goalkeeper .

In the second half, Bayern managed to tie Augsburg in the penalty area more often, but they still lacked the necessary precision. FCA punished this: Berisha was miserably free at the penalty spot and only had to push in. The Bavarians continued to run, but despaired several times at the strong Gikiewicz. Sané, for example, failed free-standing against the FCA keeper (72nd).

Won the derby, lost the captain: Borussia Dortmund paid dearly for a historic victory over arch-rivals Schalke 04. BVB defeated eleven derby beginners from the Royal Blues 1-0 (0-0), but is worried about Marco Reus: The leader who was so strong recently had to be carried off the pitch in the first half, apparently seriously injured.

A goal by substitute Youssoufa Moukoko (79th) in front of 81,100 spectators meant the fourth BVB derby win in a row. The last time there was such a series for one of the two big clubs from the former coalfield was in 1967. Dortmund conquered the top of the table with 15 points for the time being. Schalke have been without a derby goal for 454 minutes.

Read more about this here!

Bayer Leverkusen is slipping deeper and deeper into the crisis, coach Gerardo Seoane is facing a restless international break. Four days after the 2-0 win in the Champions League against Atletico Madrid, the Werkself could only draw 1-1 (0-0) against newly promoted Werder Bremen despite a few top-class players and are still in a relegation zone. After seven league games, the highly talented Bavarian has only a meager four points in the account.

Kerem Demirbay (57th) gave Bayer the lead. Milos Veljkovic (82') equalized late for Werder, with Bayer keeper Lukas Hradecky not making a good impression. As a result, Bremen remains undefeated in their fourth away game this season. Leverkusen's Sardar Azmoun (88th) hit the crossbar. Bayer coach Seoane wanted to take the positive energy with him after the sense of achievement in the premier class. "The game was very tactically shaped by both teams. We will need this discipline," said the Swiss before the game.

Seoane started again with Jeremie Frimpong, who had assisted both goals when he came on on Tuesday. Adam Hlozek took a seat on the bench for this. Before kick-off, ex-national player Lars Bender was presented with the honorary captain's pennant by Bayer Sport Managing Director Simon Rolfes and club boss Fernando Carro, and the north curve thanked him with a "Thank you, Lars" choreography.

The game in front of 30,210 spectators in the BayArena, which was sold out for the first time this season, picked up speed. After 28 seconds, the Bayer captain and Hradecky were challenged against Marvin Ducksch's first shot. Only a minute later, Patrik Schick chased his first chance from a good position into the side netting.

Werder keeper Jiri Pavlenka saved the Czech international's second shot (8'). On the other side, Ilia Gruev tested Hradecky again (9th). As a result, Leverkusen had a little more share of the game because Werder let the hosts come close and deep and waited for a counterattack. However, an overhead kick by Piero Hincapie and a shot by Edmond Tapsoba in the middle of the first half were not dangerous. But a powerful header from veteran Robert Andrich after a corner hit the crossbar (35th).

As so often in the past, Leverkusen struggled with the exploitation of chances. After a shot by Moussa Diaby, which Pavlenka deflected forward, Frimpong missed free-standing. The negligent finishing behavior almost took its revenge before the break: Ducksch hit the side netting, Niclas Füllkrug waited too long against the rushing Hradecky - Pavlenka parried a turning shot by Diaby. After the break, Leverkusen was able to say thank you to Frimpong, who tipped the ball off the kicker's foot at the last second. Demirbay did better with a beautiful flick after a great pass from Odilon Kossounou. Werder didn't give up and still had good chances. Leverkusen, who became inexplicably passive, countered at home.

Eintracht Frankfurt has followed up after the premiere win in the premier class in the Bundesliga: Four days after the 1-0 win in Marseille, Oliver Glasner's team won 3-1 (1-0) at VfB Stuttgart. At VfB, on the other hand, the false start is perfect: The Swabians, who had achieved a respectable win last week with a 2-2 win at FC Bayern, missed the hoped-for liberation and remained without a win in their seventh game of the season. That has never happened before in VfB history.

Sebastian Rode gave Eintracht the lead in the 6th minute in front of 47,500 spectators in the sold-out arena. Daichi Kamada made it 2-0 (55'), Tiago Tomas (79') scored the goal for Stuttgart. Then Kristijan Jakic (88th) made everything clear for the guests. Eintracht were without Marseille goalscorer Jesper Lindstrom (cold). But Rode was in the starting eleven - and he fitted in brilliantly. After VfB keeper Florian Müller was able to fend off a free kick from Kamada, Rode converted the rebound with his head.

VfB, who had caused a stir during the week by signing world champions Sami Khedira and Philipp Lahm as advisors, then increasingly took the initiative. Chris Führich, Munich's goalscorer, failed with the first big chance to Kevin Trapp (14th). Otherwise, the Swabians were not really dangerous. The actions lacked precision and ideas. Frankfurt was able to form again and again. At the front, the Hessians lurked in a confused game for counterattack chances. But the last pass didn't arrive here either.

After the change, VfB increased the pressure. Trapp reacted brilliantly again, this time against Silas (49th). The visitors were more effective, although Kamada was lucky with his deflected free-kick. Müller had no chance. This was preceded by a brutal attack by Konstantinos Mavropanos on Ansgar Knauff. There should have been red for the VfB defender. Stuttgart now threw everything up front, Mavropanos just missed the goal by centimeters (65th). Eintracht wobbled briefly, but was then able to free itself to some extent. 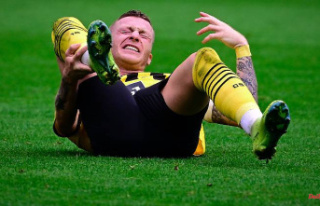