2:0 against the top favorites from Spain. 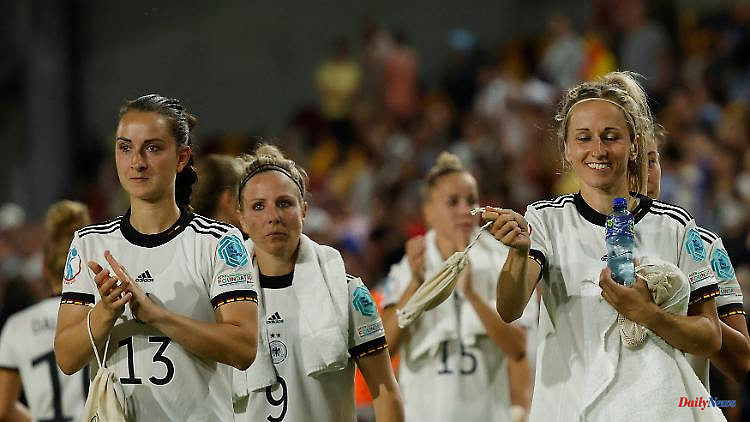 2:0 against the top favorites from Spain. The victory of the DFB-Elf in the second game of the European Championship in England gives substance to a discussion that has been going on in the background for a long time. Even Chancellor Olaf Scholz is committed to the DFB selection before the game. But the road is long.

Barely 15 minutes had been played when all the statistics showed Spain to be the dominant team in the second group game against Germany. Spain had played 100 passes, Germany only 16. It didn't matter. Because the nine-time European champions were already ahead in one statistic - in goal statistics. It should stay that way in front of 16,037 spectators in Brentford.

After an early mistake by the Spanish goalkeeper Sandra Panos, Klara Bühl made it 1-0 after just three minutes. In the run-up to this, declared by national coach Martina Voss-Tecklenburg as a clash of playing cultures, that is exactly what happened. Spain had the ball, tied up the German team and played pass after pass. Germany was ruthless, disciplined and resilient.

And of course they had Alexandra Popp, who at the age of 31 was in the starting eleven for the first time ever in a European Championship game and rewarded herself and her team with a wonderful header in the 37th minute. 2-0 for Germany. Although the Spaniards, around the wonderful midfielder Aitana Bonmati, kept the German defensive busy, but once they got through, they failed on the side netting, on their own nerves, on the outstanding Marina Hegering or on the future Wolfsburg player Merle Frohms, who also played the second finished game of the tournament without conceding a goal.

"It was a very emotional game, we can't bring more power, more energy onto the pitch. The team was in a great position, the Spaniards are a bit desperate about our defense," said the goalkeeper, who will be responsible for Eintracht Frankfurt's new season to VfL Wolfsburg. "What we showed as a team was pure madness."

A team performance that can also be attributed to Martina Voss-Tecklenburg. The experienced Alexandra Popp called her into the starting XI after Lea Schüller’s corona disease. “We were prepared not to have the ball so much,” Popp later said on ARD: “We didn’t really allow anything at the back and were very efficient up front. The win was for you too, Lea!" Then she walked away - not without talking about the EM magic - wearing a Lea-Schüller jersey.

And then there were the defeated Spaniards. "On the one hand there are the moves, on the other hand the result," stated coach Jorge Vilda, who went into the tournament with his team as the top favorite, had never fallen behind for two years - until the last preparatory game - and has now been brought down to earth. Even before the game, he spoke about the German team with great respect and appreciation.

So he added reverently: "We would like to have their fighting level, their skills, to exploit the chances. In some games we have that, today we didn't have it." It's that simple. Soccer is a game decided by goals. There is no difference between men and women.

It's also a game that's, like always, being discussed at the moment. A game that will cause all sorts of excitement during the ongoing European Championship. Because there is a lot of talk these days about the visibility of women. A discussion that is being conducted with disturbing vehemence from some quarters. With all power, the women should be moved closer to the men.

They should get their deserved share of the great trough of football capitalism and no longer stand in the last row. Sometimes it's about terms and how they are used. Sometimes it's about the big issue of "equal pay", on which even Chancellor Olaf Scholz took a position shortly before the start of the game against Spain.

"It's 2022. Women and men should be paid equally. That also applies to sport, especially national teams. Spain is ahead of the game," he tweeted and was then invited to an interview by DFB director Oliver Bierhoff. He wanted to enlighten him "a bit" about the numbers, he explained on ARD and referred to the record bonus of 60,000 euros for every German national player.

And indeed, the players would be more helped if they could work under even more professional conditions in their everyday lives, if they didn't have to worry about their financial future. Not only as national players, but also as players in the Bundesliga. A fight that national player Lina Magull wants to fight, among others.

"We should start earning so well from the second division that nobody has to work part-time anymore," demanded the offensive player, who was born in Dortmund and plays for Bayern Munich, in the "Bild". "We're talking about a minimum salary of 2,000 or 3,000 euros a month. That's how you can promote sustainable development in women's football." An understandable desire for more professionalism, which is still progressing very slowly in German football. But that can also be explained by the lack of viewer, sponsor and TV interest.

Although all Bundesliga games are now broadcast on TV, kick-off times often remain behind a paywall anyway. It's not an attractive offer. On pay TV and in the stadium, they compete with all sorts of other sports and leisure activities. The average attendance in the national league is still below 1000. It's a long way and a comparatively simple calculation. The women need more identification figures, they have to focus on a different target group. As the previous games at the European Championship have shown. The audience is younger, more female and is not characterized by the sometimes highly masculine fan structure of the men's leagues, even in the league. The sport is more affordable and is therefore more open to families, who are repelled by the male representatives' greed for power and money.

But all the talk, all the demands are useless if they are not backed up by sport. This is the only way for sport to succeed on the slow, arduous path to other spheres. The 2-0 win against Spain was therefore not only a victory in the clash of cultures, but also a small step in that direction. This summer the women are alone on stage. They play in the motherland of football and can set a counterpoint to the World Cup in Qatar. If they now succeed in continuing to impress in terms of sport and tell a different, positive story at the same time, the prerequisites for the further rise of the game in the public eye are in place.

The fact that something could change was shown not least by the matches in the knockout phase of the Champions League, when VfL Wolfsburg, for example, won 2-0 in the game against FC Barcelona, ​​although they were eliminated after losing 1-5 in the first leg , but left over 20,000 enthusiastic fans in the big stadium. FC Bayern also went to the Allianz Arena for the game against Paris Saint-Germain. It is these steps that help the national players. Also now at the EM with the good viewer numbers. You know these scenes by now, even if they don't exist in the Bundesliga. Everything is related to everything. If the team manages a coup in England, it will have an impact on the league. The games are played against this pressure backdrop. It's about bringing the game to the masses. There is seldom an opportunity for this.

This damn impressive win against Spain was all the more gratifying, which after two games even ensured the group victory thanks to the direct comparison. The practical side effect: The hosts from England will not be the opponent there.

1 With group victory in the quarter-finals: Ice-cold... 2 32-year-old dies in hospital: Another fatality after... 3 Lecture at Humboldt University: That's what the... 4 On the back of a painting: Museum discovers new self-portrait... 5 Marcel Mayer's "darkest night": Flood... 6 "Away from crises": Greeks want to attract... 7 1.5 million people threatened: Gang fights in Haiti... 8 Temperatures continue to rise: scorching heat grips... 9 "Train isn't going to Auschwitz": Deutsche... 10 Falling corona incidences: is the summer wave already... 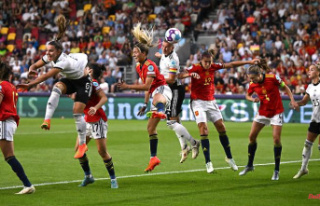 With group victory in the quarter-finals: Ice-cold...