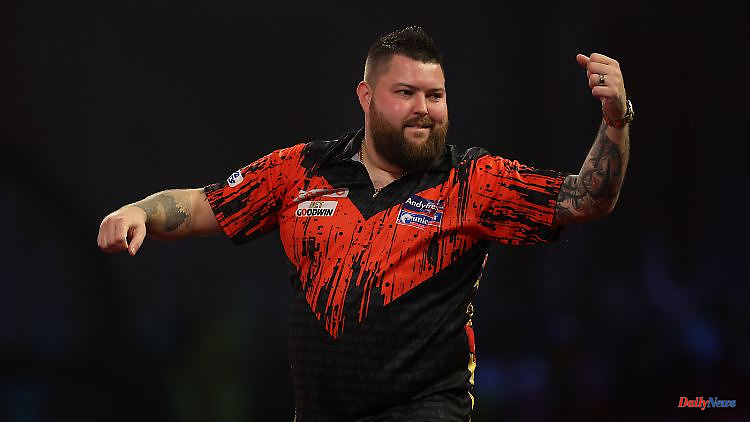 The darts world champion 2023 is called Michael Smith. The "Bully Boy" from England wins a fantastic final against top favorite Michael van Gerwen from the Netherlands 7:4. The highlight of the final is the best leg ever played in darts.

This moment is for eternity: In the second set of the final of the Darts World Championship, Michael van Gerwen and Michael Smith fire in rows into the eight-millimeter narrow triple fields. 180 van Gerwen. 180Smith. 177 van Gerwen. 180Smith. Those alone are numbers for the history books. After six darts each, both finalists are on course to nine-darter, the perfect game, rarely seen like a Blue Mauritius.

The 3,100 fans in the naturally sold-out Alexandra Palace are really going wild at this moment. And a few seconds later, the venerable "Ally Pally" feels like he's about to be demolished, it's so loud in the hall when Michael van Gerwen misses the nine-darter on double 12 by just a millimeter. Smith gives his opponent a fist in appreciation, only to do better. Triple 20. Triple 19. Double 12. Nine-darter. At this moment, Alexandra Palace is a place of incredible ecstasy. As loud as if several jet planes were taking off at the same time.

It's the greatest moment in darts history. 17 out of 18 darts land in triples or doubles. The best leg of all time that can never be topped. Logically, two nine-darters in one leg are not possible. Of course, if the submitter, in this case Michael van Gerwen, creates the nine, the fans in London would have experienced the first leg live with only perfect darts. It was better that way for the drama.

The best leg of all time was of no decisive importance for the outcome of the game. Michael Smith can only break away from the favorite Michael van Gerwen later in the game. After the 2:3 from the Englishman's point of view, Smith begins to dominate his opponent. Four sets in a row go to the vice champion from 2019 (in the final against van Gerwen) and 2022. "Mighty Mike" still wins a set to make it 4: 6, but Smith can no longer be stopped from his coronation and wins in the end 7:4.

"That sounds breathtaking. I want to take over this sport, but Michael is still here," said Michael Smith in a first reaction. Michael van Gerwen took the defeat with composure and showed greatness when he paid tribute to his conqueror on stage.

Michael van Gerwen was somewhat lucky to win the first set after missing seven darts on doubles in the second leg but still winning the leg. For Smith, it was a missed opportunity to win round one on his side. After the unbelievable second set including nine-darter and almost nine-darter, the two by far best players of the past few months continued to play in their frenzy mode. In the third set with the better end for Smith, who took the lead for the first time after set three.

But that should be the last tour for a long time. In set four of the longest and most important darts match of the year, Smith appears to be taking some time off. Michael van Gerwen drives home relaxed with 3:0. The fifth round is then fought again, in the end it is "MvG" who wins the set in the decision leg. The tension is palpable at this stage of the game. Chanting is becoming increasingly rare in Alexandra Palace's West Hall, which has hosted the world's biggest darts tournament for the past 15 years. Hardly anything is left of the party atmosphere of the first days of the tournament. The fans are not concerned with themselves, but with the game.

For Michael van Gerwen and Michael Smith, this is the highest possible award. It's true that "Mighty Mike" and "Bully Boy" can't keep up their insanely high level at times - they now have an average of 110 points per recording. In terms of drama and playful class, this World Cup final has long since caught up with the legendary final between Raymond van Barneveld and Phil Taylor.

Smith claws the sixth set 3-1, but is already 0-2 behind in the following round. Michael van Gerwen is in the process of securing the lead again, apparently relaxed. But then the drama begins. The world champion of 2014, 2017 and 2019 misses chances, Smith can still save the sentence in the decider. And then, unlike "MvG", he is there when it comes to doubles.

The epic endgame finally has it all. Eight perfect darts, nine perfect darts, 180 shots in one tour, dramatic twists. Michael Smith and Michael van Gerwen played so well that evening that they stole the voice of former World Cup semi-finalist and current "Sky Sports" commentator Wayne Mardle. After set seven, two-time world champion John Part is summoned in a hurry. "John, we need you. Wayne has lost his voice," calls a Sky employee through the press room.

Not his voice, but Michael van Gerwen finally loses the connection. Smith wins the eighth set 3-1, increasing his doubles quota to a strong 50 percent. And can refill. The nineth round also went 3-0 to the Englishman, who had also defeated the Germans Martin Schindler and Gabriel Clemens in the course of the tournament.

The 32-year-old is now just one set away from his first world title, £500,000 in prize money (around €565,000) and first place in the world rankings. After an extra round (van Gerwen shortened to 4:6), it happened a few minutes later: Match dart number two is in double eight. Michael Smith is world champion, wins the best final that "Ally Pally" has ever seen.

1 Darts boss with a clear message: Clemens has to tremble... 2 King of Insignificance: Bizarre Ronaldo celebrates... 3 Historic farewell in Rome: Pope Francis' speech... 4 Society takes stock of the year: 187 Lotto millionaires... 5 Cheerful to impressive: what if Michel Majerus were... 6 Mama Sharon blurted it out: Kelly Osbourne gave birth... 7 "I pray every day": Dieter Bohlen gives... 8 "Silence becomes treason": Prince Harry... 9 Labor law question: Can the boss dictate how to get... 10 Quite understandable: termination also because of... 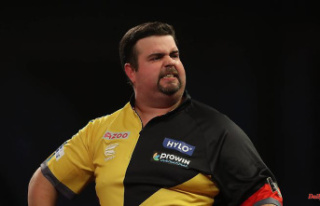 Darts boss with a clear message: Clemens has to tremble...