"Everyone is instrumentalised": The referee cannot actually punish the "One Love" bandage

The captain's armband becomes a huge excitement at the soccer World Cup. 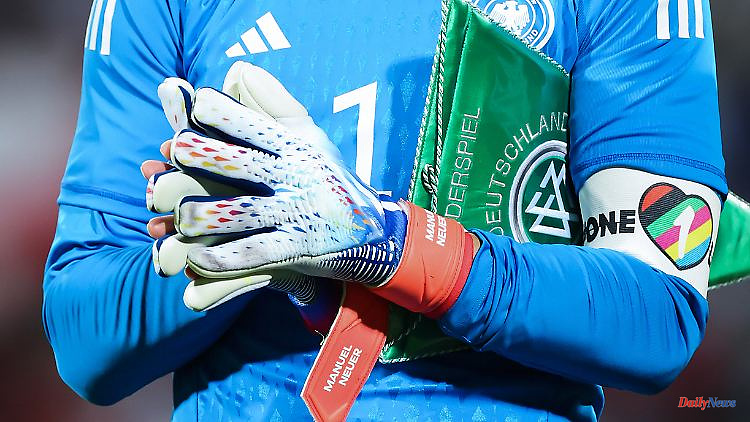 The captain's armband becomes a huge excitement at the soccer World Cup. FIFA makes it a political issue, although everything political should be kept out of sport. The world association passes the responsibility on to the referees. Formally, they have no leverage at all.

Manuel Neuer will captain the German national soccer team at the World Cup in Qatar. Many eyes will be on his arm, on the small piece of cloth that he will have tied on as a captain's armband. Because this little piece of fabric causes a huge stir.

The "One Love" armband, which the Dutch association KVNB had launched and which seven associations playing at the World Cup had joined, is a crazy problem for the world governing body FIFA. So big that it was banned. "For FIFA final competitions, the captain of each team must wear an armband provided by FIFA," according to article 13.8.1 of the Equipment Rules. FIFA supports campaigns like "One Love", but this must be done within the framework of the rules known to all. Two days before the start of the World Cup, FIFA had pulled its own bandages out of a hat for this tournament, as it had done for others before. The "One Love" bandage had been known for months, and FIFA had not raised any objections until then.

The associations bowed to pressure from FIFA and caved in because "sporting sanctions" had been threatened. There is talk of yellow cards, and there are rumors of further uncertainty about the penalties. But why should a captain's armband that conveys love for all and community get a yellow card at all?

Referee expert Alex Feuerherdt from "Collinas Erben" explains to ntv.de that there is no technical basis for the distribution of yellow cards. Bundesliga referee Patrick Ittrich also emphasizes this: "I'm looking for the rule basis for FIFA's decision to sanction wearing the 'One Love' armband with yellow. I can't find it," tweeted the 43-year-old.

Rule four on player equipment states that no political messages may be shown, but the referee will only punish if a label is offensive or provocative. "One Love" is definitely not one of them. "If someone comes with a 'One Love' bandage, that actually promotes respect and is therefore expressly permitted according to rule four in the rules," says Feuerherdt. A reinterpretation that "One Love" is meant in a derisive way in the context of the World Cup in Qatar would in turn refute FIFA's official values.

There are always situations in which the message is unclear and the referee cannot do anything with the imprint, says Feuerherdt. Accordingly, he could not sanction, but would make a corresponding note in the minutes, which goes to the organizer. He must then decide how to proceed and whether a subsequent penalty is appropriate. But then the game would go ahead without sanctions, there would be no game penalties for the respective captain like Neuer or England's Harry Kane and Virgil van Dijk from the Netherlands.

Feuerherdt therefore says clearly: "I doubt that the instruction to the referees to punish wearing this bandage with yellow is covered by the rules." In his opinion, this is only possible if FIFA orders it accordingly and the referees do not disobey the instruction. Ittrich said clearly: "Everyone is instrumentalised. Sad and unbelievable! Here too only indirectly, without a basis for yellow, oh dear!"

Even if a referee punishes Neuer with a yellow card, it is questionable what will happen afterwards. Should Neuer continue to refuse to remove the bandage, he should not be sanctioned a second time for the same "offense," the rules say. As a comparison, Feuerherdt gave the example of a goalkeeper who refuses to go on the line when a penalty is taken. First of all, he would be cautioned with a yellow card, if he continued to refuse, the referee would ask the team's captain to order his goalkeeper to get on the line, otherwise the game would be abandoned. In this case, stopping the game is justified because the game cannot be continued without the penalty being taken. A captain's armband, however, does not hinder the game, so abandoning the game is not proportionate, according to Feuerherdt.

It is still possible that the captain's armband will be passed on to a teammate after a yellow card for Neuer, who will then pass the armband on to his yellow card. Eventually all players would be cautioned, but pulling that off is a posse in itself. The game would only be delayed forever, the problem would not be finally resolved, since the bandage so offensive to FIFA is still on the pitch.

But the problem goes even deeper, as FIFA abuses its power. "We have no concrete indications of what the sanctions could look like, which is also very strange," said DFB President Bernd Neuendorf. Feuerherdt also emphasizes that the world association can theoretically sanction as severely as you like. The associations involved, such as the DFB, would have accepted fines, but even a tournament exclusion is theoretically possible. The national teams, on the other hand, have little scope for action. Ultimately, the only option would be to refuse to participate. 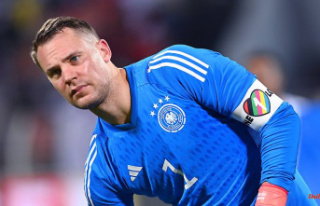 DFB and top nations buckle: Neuer plays without a...