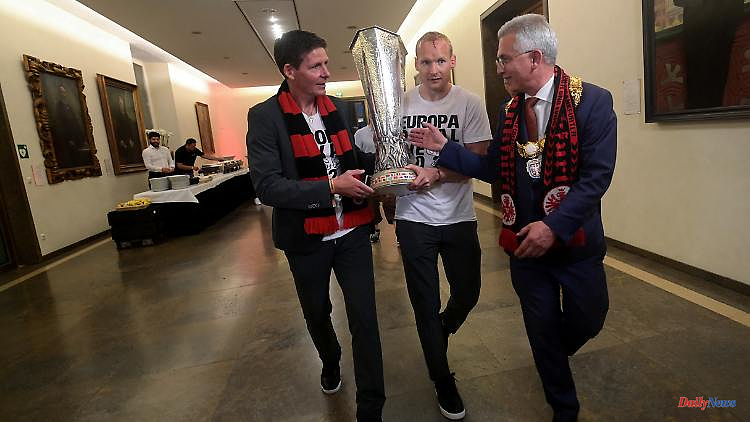 Eintracht Frankfurt accuses Mayor Peter Feldmann of "vanity and narcissism," who plays an inglorious role in the Europa League victory celebrations. The Bundesliga soccer club is now drawing conclusions from this and is declaring the politician to be an undesirable person, so to speak.

Peter Feldmann's appearance at Eintracht Frankfurt's Europa League victory celebrations quickly achieved legendary status, but the mayor of Germany's fifth largest city did not make any friends with it. "I can't imagine that Peter Feldmann is still welcome at our games in the stadium," said Axel Hellmann, spokesman for the SBU in the "Bild" about the head of administration of the Main metropolis: "There will be no basis between Eintracht Frankfurt and him in the future ." Feldmann shouldn't be seen in the former Waldstadion after these statements, especially since many fans of the Bundesliga soccer club are unlikely to be enthusiastic about the behavior of the mayor.

The most impressive scene of Feldmann's unsuccessful appearance was when he approached coach Oliver Glasner and team captain Sebastian Rode as a matter of course on the way to the town hall balcony of the Frankfurt Römer to take the Europa League trophy from them. Rode's stunned look spread immediately, Glasner's astonishment was also clearly visible. Eintracht spokesman Hellmann said "Bild": "The players and coaches present the pot to the people. Everything else is vanity and narcissism."

A clear accusation in the direction of the SPD politician, who, according to the tabloid report, feeds on the manners that Feldmann feeds on the final success of Eintracht against the Rangers from Glasgow in Seville. It was 1-1 in the final after 90 and 120 minutes, and the Hessians prevailed 5-4 on penalties and thus won a European Cup for the second time since the 1980 UEFA Cup.

Feldmann had apparently exerted pressure in advance to be part of the official Eintracht delegation, while the club had preferred to invite the Prime Minister of Hesse, Volker Bouffier, the Green Party chairman, Omid Nouripour, and Mike Josef, the sports department head of the city of Frankfurt, as political representatives. According to "Bild", Feldmann even considered issuing an order to take Josef's place. Immediately after the semi-final triumph against West Ham United, the mayor is said to have had an impact on board spokesman Hellmann in the stadium because he would insist on being taken to the final in Seville in the Eintracht delegation.

Perhaps also because he was denied this wish, Feldmann pushed himself to the fore at the victory celebration. Several media reported afterwards that on his instructions, SGE sports director Markus Krösche and the chairman of the supervisory board Philip Holzer were not allowed to go on the Roman balcony with the team and trainer. In front of this balcony and throughout the city, around 200,000 people waited for hours, despite intermittent rain showers, until the team from Seville returned to Frankfurt and drove to the town hall in a motorcade.

But instead of leaving the stage to the European Cup heroes, Feldmann gave a long speech, mispronounced the names of several Eintracht pros and "earned" numerous whistles from the spectators. Captain Rode was then irritated, saying: "I didn't quite understand it." It was "great that he invited us, but it might have been better if he had taken a step back." A diplomatic statement, at least compared to what board spokesman Hellmann said: "I would like the city to be better represented in the future."

A wish that, given Feldmann's sexist statement that has now been made public and his already well-filled files of misconduct, is likely to be shared by more and more people.

1 Flares, Bengalos, Zlatan: After the Scudetto, AC Milan... 2 Deadly shot at fair: Police arrest suspects in Lüdenscheid 3 Boy suffocated in a sack: judgment on Hanau cult murder... 4 Without a mask at the state funeral: Kim challenges... 5 Reduce negative energy: These tricks help against... 6 Lower security level: Boris Becker transferred to... 7 Compensation Judgment: Money Back for Losses in Online... 8 Is a new pandemic looming?: What we know so far about... 9 Baden-Württemberg: All in white and delicious: top... 10 North Rhine-Westphalia: Eight-year-old hit by car:... 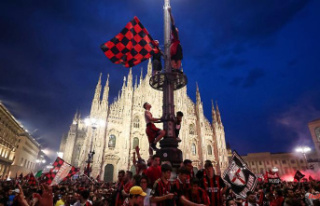