Fine-tuning up to the Supercup: Haaland ruins FC Bayern's US tour

A goal to start with: Erling Haaland introduces himself to Manchester City as befits his status. 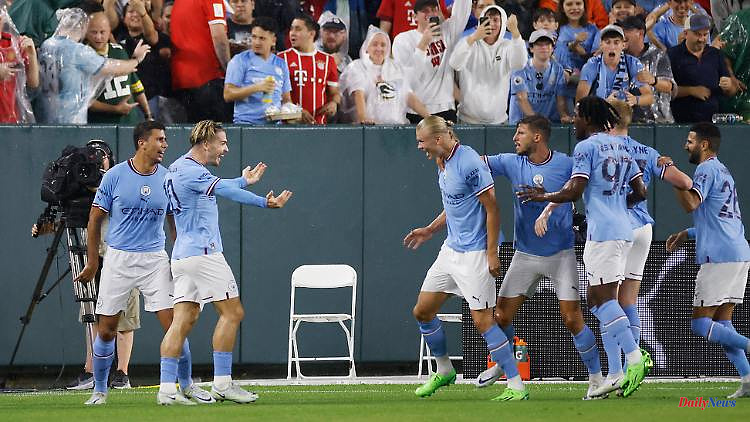 A goal to start with: Erling Haaland introduces himself to Manchester City as befits his status. Much to the chagrin of FC Bayern, who is the opponent in this game on the USA trip. That ends for the German soccer champions with a damper. CEO Kahn relies on internal pressure.

After the defeat on his birthday, Julian Nagelsmann boarded the plane back home not really satisfied. The 35-year-old was happy about a "great stadium and great fans" in Green Bay, but the dress rehearsal for the Supercup duel of the German champions FC Bayern Munich next Saturday at cup winners RB Leipzig did not succeed in a game that was not quite normal. Ex-Dortmunder Erling Haaland scored the only goal in the English champions' 1-0 win on his debut for Manchester City.

Nagelsmann still has to work on the fine tuning before the German Supercup in Leipzig. Sadio Mané, who did not return to the USA after being named Africa's footballer of the year and was therefore absent against the club of former Munich coach Pep Guardiola, should also be back against the Saxons. Mathys Tel may also join the team as a newcomer by then. According to the media, Bayern should agree with Stade Rennes about the change of the 17-year-old storm talent. A sum of over 25 million euros was speculated as a transfer fee.

"He's a very young, talented player. He can become one of the best strikers," said Nagelsmann after the game in front of 78,128 spectators in Green Bay, which was interrupted due to a thunderstorm and shortened to 2x40 minutes. Nagelsmann said his vision is that one day Tel will score 40 goals per season. But initially you would be satisfied with ten goals.

Including the fee for Tel, the Munich team paid almost 150 million euros in transfer fees this summer. This is offset by revenues of more than 65 million euros. "When there are so many top players in the squad, you want to make it as difficult as possible for the coach as a player. You can only do that if you put in a top performance," said CEO Oliver Kahn. "We created this climate. Out of this atmosphere, top performances arise again."

As expected, after a grueling week, the Munich team lost far more than they did in the 6-2 win against D.C. United demanded. And teams like the English champions are the benchmark for the highly ambitious Munich team, who are still feeling the effects of losing the quarter-finals to Villarreal in the Champions League. "Our aspirations - German Championship, DFB Cup, Champions League - are the highest," said Kahn.

Despite marketing campaigns and social events, Nagelsmann had time for six training sessions on the week-long trip. In addition, there were two friendlies, which also put a lot of sporting demands on the Bayern stars. "Of course we have to prepare for the biggest challenge: That's the coming season. Julian will also do his training program there," said Kahn.

The first title is at stake next weekend. "You shouldn't overestimate the Supercup, but we're looking forward to it," said Kahn. "He's always been a kind of location fixer," he said. In addition to Dortmund, Leipzig is also a big competitor after winning the cup next season. Six days later, the Munich team opened the new Bundesliga season away in a duel with Europa League winners Eintracht Frankfurt.

1 Bavaria: Augsburg's shock diagnosis: Dorsch falls... 2 Saxony: Man seriously injured in fire in his apartment 3 North Rhine-Westphalia: car crashes into trees and... 4 Bavaria: Unknown damaged pasture fences: 25 horses... 5 Bavaria: Driver flees after a fatal accident with... 6 Baden-Württemberg: Pedestrian dies in a collision... 7 From the smiled at blonde to the role model in women's... 8 Tour dominator Vingegaard defends himself against... 9 Baden-Württemberg: One dead and five injured when... 10 Schaumburg: "Coffee instead of tickets":... 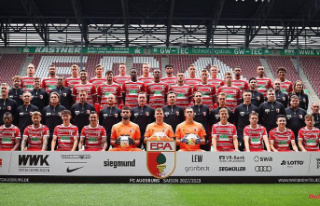