First medal at the swimming world championships: Märtens crawls to silver and cries with happiness

Lukas Märtens wants to take it easy in the final over 400 meters freestyle - and swims the first medal for the German team at the World Championships in Budapest. 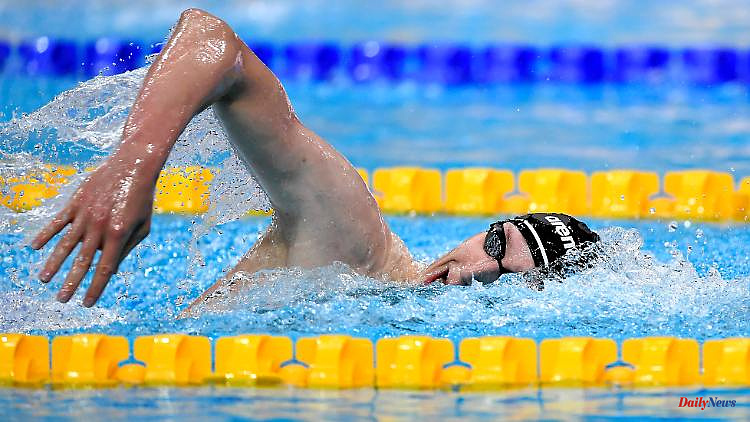 Lukas Märtens wants to take it easy in the final over 400 meters freestyle - and swims the first medal for the German team at the World Championships in Budapest. The 20-year-old just barely misses gold. Katie Ledecky has already won her 16th World Championship gold for women.

Lukas Märtens had his sights set on gold, grabbed silver and was "super happy" with it. After his second place in the World Championships final over 400 meters freestyle, the 20-year-old felt like a winner, although he had lost his lead shortly before the end. "It was indescribable, a really good race," said the man from Magdeburg, who brought the first medal to the German swimming team in the first final.

At the last turn, Märtens, who had started as the best of the year in the world, was still ahead - the first world championship title since Paul Biedermann in 2009 on this track was within reach, but the Australian Elijah Winnington overtook him.

"I wanted to do everything again, I just didn't want to anymore," said Olympic champion Florian Wellbrock's teammate, "but I'm super happy with the time." In 3:42.85 minutes, Märtens stayed 85 hundredths above his best time. When he received the medal, he fought back tears. Biedermann praised the youngster. "Lukas did very well and held up very well, especially in the second 200 meters," said the world record holder: "His time will come."

45 minutes later, Isabel Gose swam fifth in her 400m final. "I've got a lot more on it. I don't know why I can't put it into practice in the competition," said the Olympic sixth-placed disappointed. The only European in the final missed her German record by 26 hundredths in 4:03.47 minutes. In the absence of Tokyo winner Ariane Titmus (Australia), freestyle queen Katie Ledecky (USA) secured her 16th World Championship gold - she is "only" ten short of record champion Michael Phelps.

After surviving the preliminary heat in fourth place ("It was the goal from the start"), Märtens wanted to "take it easy on the finale", without the great pressure. There was also calculation behind it, because the youngster still lacks a lot of experience on the big stage. The 400-meter final was his first final in a major long-track competition, the excitement is "a bit there," he admitted, "but I think we're getting more and more under control."

Wellbrock had prophesied in the run-up to the World Cup that if his head were to play along, Märtens could "reach for the medals – maybe even gold" in Budapest. Märtens also starts in the Duna Arena over 200, 800 and 1500 meters with good prospects. He also leads the world rankings for the two longest crawl distances - ahead of Wellbrock. "I want to know," he said, "and maybe get a medal."

With his phenomenal performance at the meeting in Stockholm in April, when he swam to three world best times and also swam a little out of Wellbrock's shadow, "the penny dropped", as Magdeburg's head coach Bernd Berkhahn put it. In training sessions, Märtens is always faster than Wellbrock and the Ukrainian double European champion Michailo Romantschuk, who has been part of the group since the beginning of the war. For Märtens, however, the open water Olympic champion is still a bit ahead of himself, "Florian is already a world star".

1 With Halle in top form after Wimbledon: Only the number... 2 "Pedal cars for Formula 1?": Conservative... 3 Transfer rumors are "nonsense": Hinteregger... 4 Fortnite star soon?: Özil is planning a new career... 5 "Car is now undrivable": Hamilton complains... 6 "Get a kick in the butt": "Paralyzed"... 7 There is also a dispute with the city: Hamburger SV... 8 "Planet Eater" from Balingen: Why the German... 9 Wacky finals without a winner: The most incredible... 10 Training before the Canada race: Verstappen criticizes... 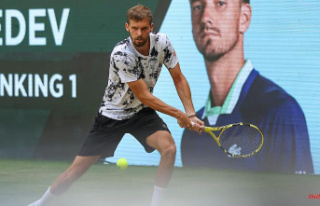 With Halle in top form after Wimbledon: Only the number...