Freiburg is the first Bayern hunter: Hertha BSC goes down in the derby 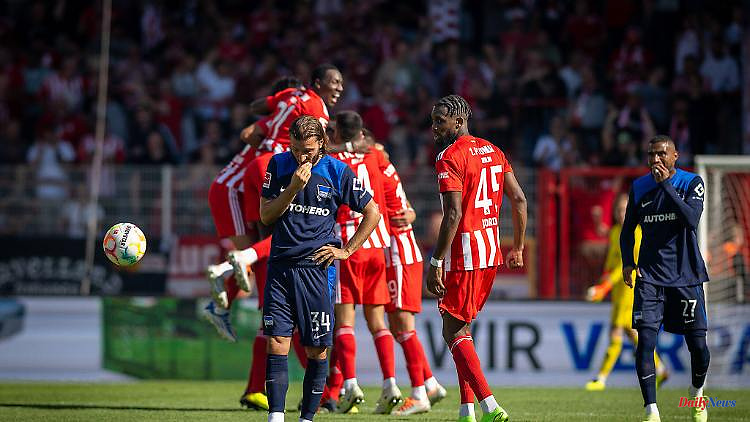 Hertha BSC starts the new Bundesliga season with a bad bankruptcy: At the start, the Windhorst club loses significantly at local rivals Union Berlin. Promoted Werder Bremen can long dream of a perfect return - despite a "competitive disadvantage". Meanwhile, SC Freiburg is celebrating a tailor-made start.

1. FC Union Berlin remains number 1 in the capital, clearly ahead of Hertha BSC. In the seventh Bundesliga derby since promotion in 2019, the Köpenickers extended their winning streak to four consecutive successes with a 3-1 (1-0) win. In front of 22,012 spectators in the sold-out Stadion An der Alten Försterei, Jordan Siebatcheu, Sheraldo Becker (50') and Robin Knoche (54') scored for the home side in the 31st minute. On the other hand, Hertha, which was disappointing across the board, had to accept its second competitive defeat under the new coach Sandro Schwarz after the painful loss of the cup at second division promoted Eintracht Braunschweig. Dodi Lukebakio's 85th-minute goal came too late to hope for a point.

Union coach Urs Fischer had made two changes compared to winning the cup in Chemnitz. New signing Diogo Leite replaced Dominique Heintz, who was not in the squad, in the starting XI, Niko Gießelmann was replaced by Julian Ryerson. Dedryck Boyata was absent from Hertha for sporting reasons. The former Hertha captain was replaced by Filip Uremovic in defence.

Union put Hertha under pressure right from the start and had three great opportunities to take the lead in just the first two minutes. Guests then freed themselves from the pressure situation without appearing dangerously in front of the Union goal themselves. However, Union continued to play more clearly and structured, while Hertha rarely came near the generic penalty area due to inaccurate passes and completely disappointed in the first half. In addition, Union increased the pressure again after around 25 minutes against guests who were only reacting. It was almost inevitable that Siebatcheu took the lead, who only had to nod off a cross from Sheraldo Becker. Hertha only had to counter a free-kick from around 18 meters from new captain Marvin Plattenhardt, which was not a problem for Union goalkeeper Frederik Rönnow (36'). Two minutes later Ryerson missed the 2-0 for the hosts.

After the change of sides, Union pressed as at the beginning of the game. After less than 35 seconds, Siebatcheu forced goalkeeper Christensen to make a brilliant save, Becker and newcomer Janik Haberer also failed in the following minute. Becker did better in the 50th minute, who, after a nice combination, tipped the ball past Christensen, who was falling out. Three minutes later, Knoche's header tumbled into the far corner of the blue and whites after a corner by captain Christopher Trimmel. Lukebakio's consolation goal for the guests five minutes before the end could no longer change Union's supremacy in the capital.

Farke had chosen Florian Neuhaus to replace the injured Lars Stindl in attacking midfield when he made his Bundesliga debut and thus filled the most important position ideally. Because the national player, otherwise often used in defensive midfield, has his greatest qualities in the game up front. The Japanese Ko Itakura was the only new signing in Borussia's starting XI. However, Neuhaus seemed a little hesitant after an early foul by Stefan Posch, and the Hoffenheim defender received a yellow-red card in the 19th minute for the next foul on Bensebaini.

The Kraichgauers, who have not yet found an adequate replacement for David Raum, who was transferred to Leipzig, had to change their game after the early dismissal. Stanley Nsoki, who was signed this week for around twelve million euros, made his first appearance, but Hoffenheim's coach had to take his defensive midfielder Diadie Samassekou out of the game to replenish the three-man defense. Newcomer Ozan Kabak was in the starting XI anyway.

In the hectic game, which was characterized by many mistakes, the guests took advantage of being outnumbered. Winger Skov hit a left-footed shot from 15 yards to surprisingly make it 1-0 for TSG. The hosts' defense, which was not well-rehearsed in preparation due to various injuries, was not only shaky in this scene.

As the game progressed, the pressure on Gladbach increased. Marcus Thuram, who turned 25 on Saturday, caused a lot of concern. After a corner and a header from Itakura, Bensebaini equalized with a remarkable overhead kick. Despite the best chances, including Joe Scally only hit the crossbar (49th), the hosts struggled for a long time before Thuram and Elvedi scored in the final phase to win.

Europa League starter SC Freiburg got off to a great start thanks to a strong second half and outstanding newcomers. The Breisgauer won 4-0 (0-0) at FC Augsburg and thus advanced into the top 20 of the all-time Bundesliga table. Ex-Augsburg Michael Gregoritsch, of all people, who was said goodbye before the game, initiated the victory in front of 26,310 spectators with a header (46th minute). Vincenzo Grifo with a directly converted free kick (48th) and the newcomers Matthias Ginter (61st) and Ritsu Doan (78th) followed up.

In an initial phase with few chances, Augsburg had more game shares. The Fuggerstadt team tried to implement Maaßen's requirement to play more courageous and attacking football. However, the hosts rarely made it through the Freiburg defence, in which national player Ginter ensured order. Daniel Caligiuri's shots from the turn (5th) and from the edge of the penalty area (11th) remained Augsburg's best scoring chances.

The longer the game lasted, the more the Breisgauer controlled the game - and Augsburg increasingly ran behind. SC captain Christian Günter's shot (33') hit the post. Maximilian Eggestein's conclusion at the end of the overall lame first half just missed the far post. Then FC Augsburg experienced 45 minutes to forget. After the restart, it only took 15 seconds before Gregoritsch, of all people, headed into the far corner and silenced the fans of his former club. The Freiburg goal mood was now awakened. Less than two minutes later, a direct free kick from Grifo landed in the net again.

Suddenly only the SC was playing. After a corner, Roland Sallai put the ball into the bottom left corner from behind. In Freiburg's jubilation, however, the referee decided offside after video evidence. The referee then had to count the goals from homecomer Ginter, who had switched to his training club from Mönchengladbach before the season, and from Doan.

Double goal scorer Karim Onisiwo gave FSV Mainz 05 a great start at VfL Bochum. The Austrian striker scored both goals for coach Bo Svensson's team in a 2-1 (1-1) win. Onisiwo gave Mainz the lead in the 26th minute in front of 24,110 spectators in the Ruhr Stadium and then scored again in the closing stages (77'). The VfL, which is traded by many experts as the number one relegation candidate, did not play a bad football game, but was too harmless in the end. More than the interim equalization by ex-Mainzer Kevin Stöger (39th) was not possible for Bochum.

In the past season, the team of coach Thomas Reis surprisingly held the class as a promoted team. With a lot of commitment and consistent duel leadership, Bochum developed advantages at the beginning. VfL won the first important duels man against man. The audience honored this with applause. The first chances also belonged to the hosts. Stöger shot over the orphaned goal from a long distance, 05 keeper Robin Zentner parried a remarkable direct acceptance by Gerrit Holtmann.

Then things got hectic. Bochum's Maxim Leitsch, who had been with Mainz 05 for many years, got the ball after a header from Simon Zoller. The VfL players vehemently demanded a penalty kick, but referee Felix Zwayer, after consulting the video assistant and viewing the TV images himself, decided against it (18'). Bochum played well but made a mistake in defense. Central defender Erhan Masovic misjudged a cross from Edimilson Fernandes. Onisiwo used this with a placed header to guide the guests.

Mainz, who had to be without the injured striker Jonathan Burkardt and their sick captain Silvan Widmer for a short time, had chances to extend their lead. But inaccuracies in the end and Bochum's goalkeeper Manuel Riemann kept VfL in the game. In a phase in which Mainz seemed to have the game under control, Stöger of all people managed to equalize. The 28-year-old hit the corner with a mixture of a cross and a shot from half-field.

Bochum took the momentum of the goal and continued to play forward. Similar to Mainz before, VfL also lacked the necessary precision in the end. Both an attempt by Takuma Asano and a shot by Zoller flew over the goal after the hour. Mainz was hardly in front - but then Onisiwo struck again. As in the first round, the match winner scored with a head to the acclaimed away win.

Werder Bremen missed their first win of the season by just six minutes on their convincing return to the Bundesliga. After a year in the second division, the Hanseatic League drew 2-2 (2-1) at VfL Wolfsburg on Saturday. However, coach Ole Werner's team was the better team for a long time compared to the disappointing wolves.

Lukas Nmecha (11th) stopped the energetic start of the promoted team with the Wolfsburg 1-0. However, Niclas Füllkrug (21st) and Leonardo Bittencourt (23rd) shocked the home side with a double strike within just two minutes. The Wolfsburg showed a harmless appearance and failed again and again to themselves or the stable Werder defense. Josuha Guilavogui (84th) provided the surprising equalizer shortly before the end. 28,015 spectators watched the game in the Volkswagen Arena - although a few seats remained free in the away block. Because of a police search at the train station, Werder-Ultras had decided to return to Bremen. The climber condemned the measure and spoke of a resulting "competitive disadvantage", the police referred to the need for searches to avert danger.

The lack of an active fan scene in the stadium was noticeable, but there were still several thousand Werder supporters. Your team pushed the Wolfsburg back deep into their own half. The wolves didn't put up with it at first. After a strong pass from newcomer Patrick Wimmer to Nmecha in the penalty area, the 23-year-old put the ball over goalkeeper Jiri Pavlenka to make it 1-0. On the other side, however, Werder hit back shortly afterwards: Füllkrug equalized with a powerful long-range shot from almost 20 meters. Just a short time later, Bittencourt increased the lead to make it 2-1.

Coach Werner, who experienced his first Bundesliga game on the sidelines, spoke of a "hard piece of work" in Wolfsburg before the start. Bremen seem to have taken that to heart and were much more determined in the duels. The Wolfsburg, on the other hand, were often too harmless and didn't really find a game rhythm.

Coach Niko Kovac, who played his first league game as Wolves coach, saw that his team still had to correct some coordination problems, mistakes and gaps in defense in contrast to the stable defense of the guests. At times it was a disappointing performance, which the home fans whistled at. Bremen came up regularly from their own right side in particular and kept trained central defender Micky van de Ven on his toes, who had his problems as a left-back.

In the second half, Kovac brought on returnee Josuha Guilavogui and shortly thereafter took off candidate Josip Brekalo, who had surprisingly made it into the starting XI but was hardly able to set any offensive accents. Even with the substitute attacker Jonas Wind, the home team hardly had any chances worth mentioning. Bremen had no trouble defending against the unimaginative hosts. It was only shortly before the end that the wolves dampened the party mood in Bremen when Guilavogui scored late to equalize. 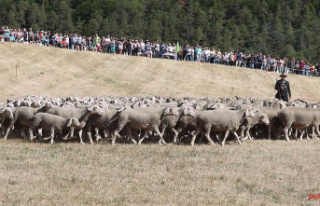