From Berlin to the OR: Michael van Gerwen wins and has to go under the knife

For the first time, the playoffs of the Darts Premier League will be held in Berlin, and for the sixth time Michael van Gerwen has won the tournament series, which is endowed with 320,000 euros in prize money. 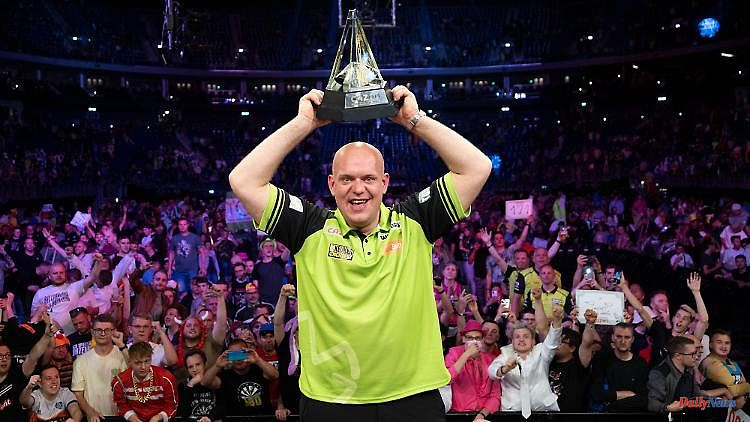 For the first time, the playoffs of the Darts Premier League will be held in Berlin, and for the sixth time Michael van Gerwen has won the tournament series, which is endowed with 320,000 euros in prize money. A 'good feeling' for the Dutch superstar ahead of his surgery.

Shortly before midnight on Monday evening, Michael van Gerwen roars his joy with his usual primal scream in the Mercedes-Benz Arena in Berlin. The first match dart was 11:10 in the final against Joe Cullen. It's the end of a dramatic final between the Dutch superstar and the surprise English finalist. For the more than 10,000 spectators in the almost sold-out hall at the Ostbahnhof, it is a befitting compensation for two boring semi-finals before.

The best four of the eight Premier League players qualified for playoff night. However, it is not van Gerwen who is the slight favourite, but defending champion Jonny Clayton. The Welshman had reached the final of 8 of the 16 mini-tournaments over the course of the Premier League season, clearly topping the overall standings. In the semifinals, the dream of another triumph is as good as over after a quarter of an hour. Clayton is quickly trailing 6-0 against Joe Cullen, finding no means against the uncompromising fourth-placed sides of the regular Premier League season.

"The start of the game is extremely important. It's about gaining self-confidence. Hopefully I'll get out of the starting blocks well," Clayton had previously said in the darts podcast "Checkout". "For me the start of the match will be more important than for Joe." And indeed, the Welshman is not coming back after his disastrous start that evening. In the end, Cullen prevailed 10:4. With the same result, Michael van Gerwen also wins against Englishman James Wade.

It's not yet a memorable darts evening in Berlin, but the final should make up for the one-sided semi-finals. Premier League debutant Cullen grabs the first leg in superb fashion but then misses three darts on doubles to make it 2-0. Van Gerwen accepts the gift and pulls away to 3:1. The Dutchman can keep the two-leg lead up to 6:4.

Then the Cullen comeback takes its course, the "rock star" from Bradford takes the lead 7:6 and is suddenly the favorite to win the second largest darts tournament in the world after the World Cup. But Van Gerwen stays tuned and always manages to equalize. 11 legs are needed to win the final, at first van Gerwen seems to be able to make the decisive break at 9:9, but Cullen counters with a break to 10:10.

Cullen is allowed to start the decision leg. A big advantage for the 32-year-old. And indeed, the Englishman wins a match dart, but puts the dart a millimeter wide of double 16. "MvG", on the other hand, is on the spot, hitting the eight millimeter wide double field in the first attempt. Cullen has to be satisfied with the equivalent of around 145,000 euros in prize money, and the Dutchman has 325,000 euros in his account.

"My focus was completely on this event. It wasn't easy, but what a day. Joe Cullen was phenomenal in this final. I'm overjoyed," van Gerwen rejoices at the press conference half an hour later. The 33-year-old Dutchman has fallen back to third place in the world rankings after two years, which were weak by his standards. "MvG" last won a major tournament in November 2020. "I've had a really hard time, the last 18 months have hurt me. That's why the win means so much to me," says van Gerwen and also addresses words to the audience: "The fans in Berlin were sensational. They love the sport honored."

Before van Gerwen wants to win more titles in the next few weeks - the World Matchplay, one of the most important tournaments of the year, is coming up in the summer - the six-time Premier League winner must first have an operation.

The Dutchman was diagnosed with carpal tunnel syndrome. The 33-year-old is struggling with a tingling in his right throwing hand and arm. "I was treated for a while to relieve the symptoms so I could continue to play at a good level. However, it has become clear that I will need surgery to finally solve this problem," said van Gerwen at the end of May on social media with.

"I have no other choice. My doctor told me he wouldn't do it unless it was absolutely necessary. But I still have a long career ahead of me, so now is the right moment for it," explains van Gerwen in the evening his triumph. "Of course, the win gives me a good feeling. The surgery is in 11 hours and 20 minutes. I hope my doctor is ready," joked the three-time world champion just after midnight.

Because of the operation, the darts star will even miss the team world championship, which will be held in Frankfurt from Thursday to Saturday. And what does van Gerwen do in his free time? "There's still enough to watch on Netflix." 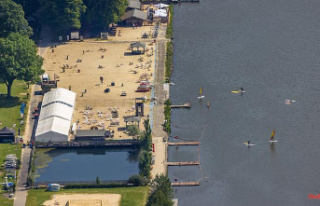