Füllkrug's first World Cup goal: Who is the "killer with the tooth gap"?

Against Spain, Niclas Füllkrug saves the German national soccer team from the start of the World Cup debacle. 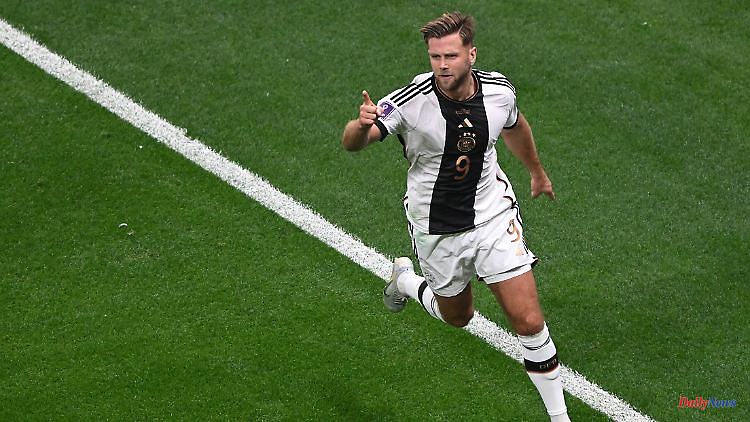 Against Spain, Niclas Füllkrug saves the German national soccer team from the start of the World Cup debacle. The man from Bremen impresses experts all over the world with his goal. A year ago, nothing indicates that.

Who is this Niclas filling jug? This is how international experts in particular spent their Sunday evening. The 29-year-old hammered the German equalizer into the goal shortly before the end of the second World Cup group game against Spain. The British "Times" described the big surprise in the DFB squad as the amazing "killer with the tooth gap".

Above all, English-speaking journalists researched where you can get a quick overview: on Wikipedia. What they found were the filling jug basics, so to speak: His wife's name is Lisa, he owes his nickname "Gap" to his gap in teeth and to ex-Bremen Marco Arnautović, who gave him that. But it's also getting more special: after a Werder training session, Füllkrug once stuck an opponent's tooth in his forehead and he's supposed to motivate himself with Survivor's "Eye Of The Tiger" before games.

Did that help him before the game against Spain? This is not submitted. But there's a reason the experts had to turn to Wikipedia. The French "L'Équipe" explained the great ignorance surrounding Füllkrug above all with the fact that they didn't have him on their list outside of Germany because he doesn't play in the Champions League. And if the desert World Cup had taken place in the summer, as originally planned - Niclas Füllkrug would not have been there. He has only been a national player for twelve days. In the summer he was still an insider tip in the German football world. Someone who was mostly known to football nerds and Werder fans.

In the DFB team, he now occupies the German space in the opponent's penalty area with force, where Kai Havertz against Japan (1: 2) and Thomas Müller were at best makeshift solutions until he was substituted against Spain. "I think it was important that someone broke the knot," said Füllkrug. "We don't need to go crazy now either, it's a 1-1 draw and not a win."

He wasn't always the one who let the knot burst. His career has not gone smoothly so far. He made a name for himself in the youth teams, playing from U18 to U20. But at Werder he didn't make a breakthrough at first. Füllkrug had to take a long detour: Fürth, Nuremberg, Hanover and then back to Werder. His body also slowed down his career, the injury history reads frightening: three cartilage damages, a cruciate ligament tear, a lateral ligament tear in the ankle.

A year ago it made his World Cup appearance all the more unlikely. Werder not only trusted in "Lücke", but also brought in Marvin Ducksch from Hannover 96. At the beginning of the season, Füllkrug only made short appearances and rarely scored, coach Markus Anfang preferred strike partner Ducksch. Füllkrug was then primarily a frustrated second division striker. The big change came after the change of coach. An employee of the Bremen health department noticed irregularities in the trainer's vaccination card - the beginning flew, Ole Werner took over.

In terms of sport, this meant that Werner didn't choose between Füllkrug and Ducksch, but let both play. The rest is known: In the summer, Füllkrug stayed fit and completed almost all of the preparation. The result: With ten goals for newly promoted Bremen, he is currently the most accurate German attacker in the Bundesliga and made it into the national coach's notebook this season.

In Qatar, "Gap" is intended to fill a particularly gaping void. Since the end of the career of World Cup record scorer Miroslav Klose, the great German center forward tradition has fallen into disrepair. Former national coach Jogi Löw recently tried improvisation: at the 2018 World Cup in Russia he tried it with Timo Werner, at the European Championships three years later with Serge Gnabry. None of them could fill the gap.

Now Füllkrug is supposed to revive this great tradition - with the "9" on the back. The idols Fritz Walter, Uwe Seeler, Klaus Fischer, Horst Hrubesch and Rudi Völler used to play with this number at world championships. This time: filling jug? "They were all good guys, real guys. I think I'm a good guy too," said Füllkrug before the World Cup. The number nine, however, was the idea of ​​the DFB. "You asked if I was fine with that." His answer? "Yes, of course I'm happy about it, it's definitely a cool thing." He often wore them in his youth, for TuS Ricklingen he scored 162 goals in a single season as a "niner".

At the World Cup there will probably not be quite as many. He has scored two goals in his three appearances so far. But it's still not enough for the starting eleven. Füllkrug on the nine, that's "no panacea," said Flick's assistant Marcus Sorg. You have to see "what effect which player has at what time. You shouldn't lose this effect." Means: the filling jug remains a joker. As such, he is fully involved, even off the field. Although new, the attacker is "relatively loud", praised İlkay Gündoğan. Captain Manuel Neuer said: "He brings in a certain freshness. We celebrated him properly." Füllkrug was visibly enjoying "that I'm gaining a foothold here, leaving my mark and being able to help the team". And now more people in the world know who this Niclas Füllkrug is. 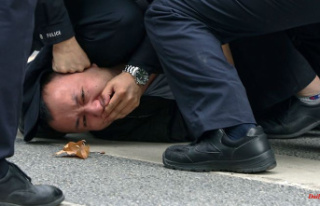 A Wave of Protest: How Chinese Rebel Against the Zero-Covid...