"Goosebumps" at the start of the Bundesliga: This football record should be eaten quickly

The start of the women's Bundesliga will be remembered. 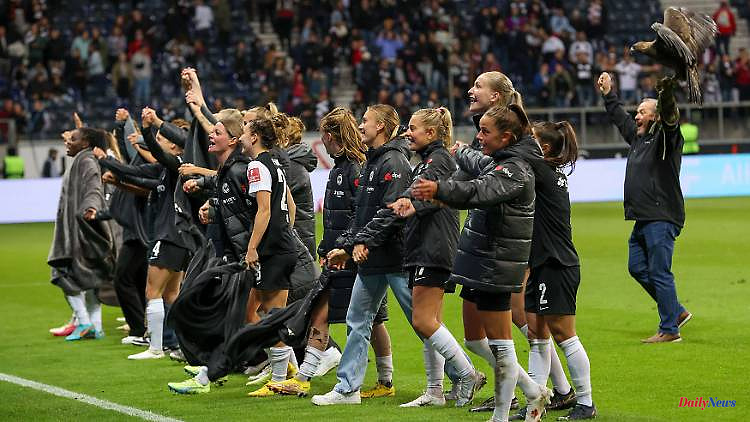 The start of the women's Bundesliga will be remembered. Not because of spectacular goals, because not a single one is scored. But because of the scenery. There have never been so many spectators in the stadium. The Eintracht Frankfurt team is therefore happy without a surprise win. The hype makes you want more.

Eintracht is omnipresent in Frankfurt. Stickers stuck to lampposts. The scarf, worn under the open jacket in the suddenly approaching autumn, has black and white stripes. On Friday afternoon, too, there is a spirit of unity in the city. The Bundesliga club only plays on Saturday - and then also in Stuttgart? Well, this time it's about the Eintracht women. The team opens the new Bundesliga season with a home game against the runners-up FC Bayern Munich (0-0). And the club has no less than a record planned.

Already in the S-Bahn on the way to the stadium, there is a lot of speculation as to how high the attendance record will be. A fan wearing the jersey of Sebastian Rode, the captain of the men's team, is hoping for more than 20,000 fans, maybe even 30,000. "The women deserve everything they can get," says his interlocutor. Unlike usual, they don't drive to the stadium at Brentanobad, where he attended every game last season. Rather, he is thrilled that the women can now enjoy the great scenery in the Deutsche Bank Park.

"That will also impress the women of Munich," he hopes. They played against Paris St. Germain in the quarter-finals of the Champions League in the Allianz Arena last season. 13,000 spectators came out to Fröttmaning in March.

The attendance record for the women's Bundesliga is 12,464 spectators from 2014. At that time, the previous club 1. FFC Frankfurt was still playing against VfL Wolfsburg. Not only eight years have passed since then, but above all the summer with the exciting European Championship in England lies in between. This recently triggered a real hype in women's football. This should stop if possible - and broadcast in the Bundesliga. Highlight games, like the one in the big stadium, should ensure new attendance records and a good atmosphere.

This plan works. "In the meantime I had goosebumps, that doesn't happen that often for me," says Eintracht goalkeeper Stina Johannes after the game - and that's not due to the sensitively low temperatures that prevail in the evening and her relative boredom because she is hardly challenged . "I really enjoyed it and I think all girls feel that way." Captain Tanja Pawollek praised the "great atmosphere", sports director Siegfried Dietrich enthused: "The spectators are a dream. It's simply overwhelming." Only shortly before the final whistle does the stadium announcer reveal the secret of the number of spectators. There are 23,200, including 200 to 300 Bayern fans, not all of whom had contiguous seats in a small separate fan block.

5,650 spectators fit into the stadium at Brentanobad, where the Eintracht women normally play. "We can be proud of what we have created," says Dietrich. Not just a clear record, but above all a crazy difference from the previous season, when an average of just 800 people came to the stadiums across the league.

The 23,200 spectators first politely applaud the European Championship players from both teams, who are honored in the same way as the referee of the season, Katrin Rafalski. But with the kick-off, the sympathy becomes clear, especially the side of the grandstand, which is dominated by the active fan scene among men, practices making the mood by jumping, singing, clapping - and Bayern booing during longer ball possession phases. After just three minutes, there is momentary horror. The Footballer of the Year, Bayern's Lea Schüller, scores after a pass from Lina Magull, but her remarkable lob doesn't count. There is no VAR in the women's Bundesliga, so the offside position whistled by Rafalski cannot be checked - probably lucky for Eintracht.

Only four minutes later, a Munich player is the focus again, this time it is the only European champion in the league, Bavaria's new signing Georgia Stanway. She cleans up Sophia Kleinherne in a rustic way, receiving the first yellow card of the season. Because she doesn't really hold back afterwards and commits more fouls, she is substituted at halftime, Stanway is clearly in danger of being red.

The new Bayern coach Alexander Straus cannot want a game of ten against the euphoric Frankfurt women. Because while his team are the favorites, the Frankfurt women have them well under control. The hosts have more possession of the ball in the first half, and they dominate the game, especially after the break - but they can't make a profit from it. Because apart from Schüller's whistled hit, the ball doesn't wriggle in the net. In the 30th minute, Sjöke Nüsken is the closest, but she misses from close range, jumping wide of the ball, which Lara Prasnikar extends with the heel of Barbara Dunst's free-kick. And so the game ended 0-0 at the start of the Bundesliga.

The perceived victory goes to the Frankfurt women. For them, more people come to a game than ever before, they control the favorites. "The second half was really, really good. You rarely go into a game against Bayern Munich and expect to have more possession," says a satisfied Laura Freigang. The offensive woman, who triggered her own hype at the EM despite little playing time, in the hashtag

The fact that Freigang lasted until they were substituted in the 73rd minute shows, according to their coach Niko Arnautis, the "mentality and character of the squad". The 22-year-old falls on her shoulder in a duel with Stanway shortly before the break, needs treatment and is in obvious pain as a result. But she is still on the pitch after half-time and gave her the okay, according to Arnautis. "The game went so well that you don't necessarily want to change, the team was totally involved." Freigang confirms after the game that she is in pain, but does not yet know if and what could have broken. With an ice pack on her aching shoulder, she can at least enjoy the scenery from the bench after her substitution. "Then I had time to soak it up."

Bayern probably don't enjoy the record start so much. They are then in a great hurry to leave the city quickly. There isn't even time for the mixed zone, the team drives to the airport as quickly as possible, the plane doesn't wait. The women of Munich have long since left the stadium, and Frankfurt fans are still strolling on their way back to the S-Bahn, past the witch's house and the grill and beer stand at the station. The mood is blissful, with many attending a women's game for the first time. They have made what national coach Martina Voss-Tecklenburg hopes for: "I wish in Germany that the fans who run to the men now say, 'Hey, I support my club here and I just support everyone there. '" In Frankfurt it worked out at the start of the Bundesliga. Other clubs want to follow with highlight games.

Next weekend, TSG Hoffenheim will also welcome the champions from Wolfsburg to their large arena. The top game between Wolfsburg and Bayern is scheduled for matchday five, and the doubles winners will also move to the large Wolfsburg stadium. Freigang will certainly be happy to watch if she isn't on the pitch at the same time: "Highlight games are a very good way to advance football." Who knows, maybe the 30,000 fans that the Rode jersey wearer wants for the women will soon be reality.

1 Struff and Krawietz/Pütz deliver: Unbeatable double... 2 Compensation in the 94th minute: Mainz robs Hertha... 3 DBB team is defeated in the thriller: The German dream... 4 Eintracht and Bayern with a draw: A record but no... 5 Eintracht scores important points: Hannover 96 climbs... 6 Comeback after baby break forbidden: Olympic champion... 7 "Nothing to it" about allegations ?: HSV... 8 Buschi and Schmiso on EM cracker: "This is how... 9 Records, TV times, hopes: Kick for the Bundesliga:... 10 "We are in a dilemma": IOC thinks about... 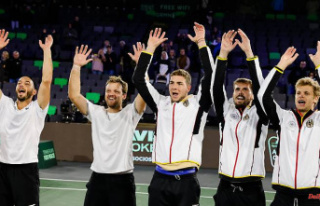