"Hard fight" in the EM semifinals: Will Popp's striker gene lead the DFB team to the final?

The corona-related absence of Klara Bühl forces the German team to rebuild before the EM semi-finals. 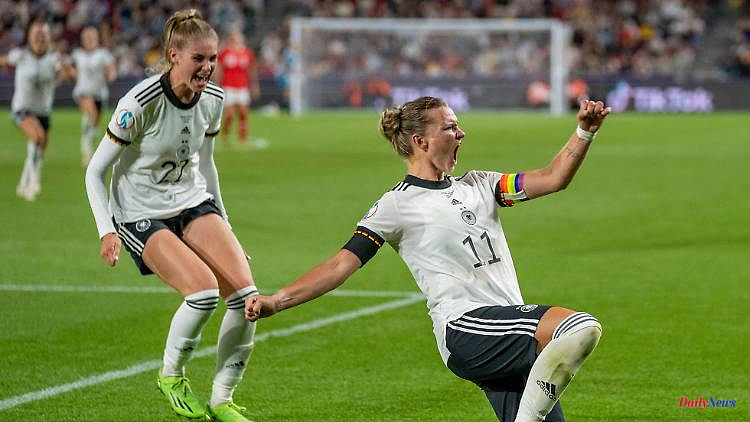 The corona-related absence of Klara Bühl forces the German team to rebuild before the EM semi-finals. Captain Alexandra Popp is set against France and could extend her record. The 31-year-old received a lot of praise from national coach Martina Voss-Tecklenburg in advance.

"Why shouldn't she also score a fifth time?" asked national coach Martina Voss-Tecklenburg with a grin at the final press conference before the semifinals of the European Football Championship against France. What is meant is captain Alexandra Popp, with goals in four consecutive European Championship games she has already set a record, in the evening in Milton Keynes (9 p.m. / ZDF, DAZN and in the ntv.de live ticker) another goal from her could be the longed-for one Making it perfect for the final at Wembley Stadium.

"I think Alexandra Popp's performance at this tournament speaks for itself. She speaks a language that has characterized Alexandra Popp since she has been playing football: always being willing to go to and beyond the limit, to give everything ", praised Voss-Tecklenburg. The fact that the 31-year-old is in England at all is not a matter of course. She had never been able to take part in a European Championship, was always injured - and this time the curse almost stopped. In fact, the corona pandemic saved them from that. If the European Championships had taken place last year as planned, she would have had to watch again with a serious knee injury. So she fought her way back in time. She overcame the next shock - corona infection in the preparatory training camp - in good time before the start of the tournament.

So now she's responsible for scoring goals, which isn't something that can be taken for granted either. At VfL Wolfsburg she mostly plays in midfield, but Voss-Tecklenburg sees her as the striker she once was. "The plan with her in the nine position was a collaborative process that Alex in particular was very concerned about." After her long injury break, she had to work a lot on her fitness. "It was great to see how Alex worked for those moments."

It paid off, four goals in four games speak for themselves. In the opening game against Denmark, Popp came off the bench for Lea Schüller before she scored the goal to make it 4-0. In the other games she was already in the starting XI again - also because Schüller had tested positive for Corona. "It was nice to see that she found the striker gene that lies dormant in her so quickly," said the national coach. "She is one of our very important leaders. Of course we hope that she keeps her small streak."

She also gave great praise to Schüller, who is now fully accepting her role as a substitute: "She's fantastic in training." At the same time, it is also clear: "The moment can come when you need both - either one after the other or together." Against France, however, there will inevitably be a change in the starting eleven in a different position: Klara Bühl is out due to a positive corona test, the left attacking side has to be replaced. Probably with top talent Jule Brand, the youngest in the German squad at 19. So far she had only come to this tournament for short appearances. Although Voss-Tecklenburg didn't want to publicly commit to it, preferring to emphasize that they had "so much quality in the squad", but in the final training session Brand then slipped on the shirt of the starting XI players during a practice session.

Bühl's failure "made us quieter," Voss-Tecklenburg admitted. Since the Bayern player had no symptoms, nobody would have expected the news. "Positive and still positive," Bühl immediately wrote on Instagram. Her teammates now want to play for her. "We will try to win for them," stressed Lena Oberdorf.

With the fifth win in a row, the DFB team would reach the final of the European Championships, for the first time since winning the Olympics in 2016, Germany would be in a final again. "It was always our aim to win this title," said Sophia Kleinherne in the ntv / RTL interview. And that despite the fact that the mood in the country before the tournament was not at all hopeful. Internally, things always looked different: "We put a lot of pressure on ourselves." The path towards the title now leads via France. Voss-Tecklenburg expects an "absolutely equal game" against a team that has never reached a European Championship semi-final, although they are always among the favourites. France's captain Wendie Renard is also expecting a "tough fight". "Games against Germany are always great, these are the duels we play for."

"Each team will try to force the other to make mistakes," predicted Voss-Tecklenburg. Each team will want to impose their game on the other. "If we accept the duels, we can annoy them, because they don't like that," France insider Sara Däbritz gave them this tip, Oberdorf said. Voss-Tecklenburg made another promise: "Regardless of the result, we'll be able to leave the pitch and say we gave our all." 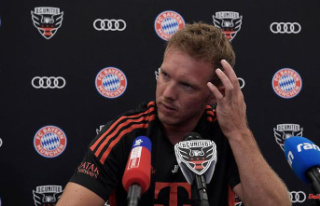