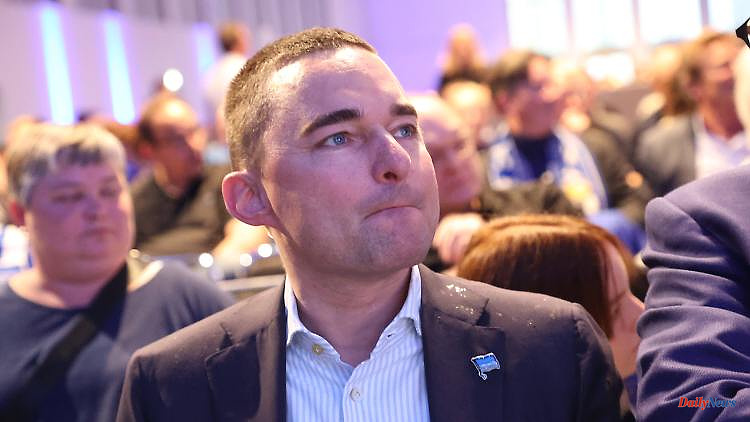 Lars Windhorst's speech at the Hertha BSC general meeting is eagerly awaited. When the investor steps up to the microphone, there is a commotion. The 45-year-old has experienced completely different things, remains calm, promises new money and will certainly not leave as a loser.

Lars Windhorst came and announced that he would not be leaving. After more than six hours in exhibition hall 20 in Berlin's Westend, it was the dazzling investor's turn. Windhorst had previously spent most of the time sitting in the front row. And like the rest of the more than 2800 members attended the spectacle. Together they had driven the acting President out of office, mourned the deceased members, listened to reports from the departments and heard from Managing Director Fredi Bobic, but Windhorst was the magnet of the meeting.

Accompanied by loud jeers, some applause from others and a banner with his likeness crossed out, the man who had turned the once staid club into a gigantic entertainment machine stepped onto the stage - at the expense of sporting success and unity. The 45-year-old investor faced a deeply divided club that currently has no CEO, no coach and no president or vice-president. Without sporting success anyway.

Since Windhorst's money came to Berlin in the summer of 2019, things have always gone downhill. After all, last Monday they managed to stay up in the relegation game at Hamburger SV at the last minute. Kevin-Prince Boateng coached, Felix Magath later went chopping wood, but the problems didn't go away. Only the greatest calamity was averted. In the night after the relegation, financial director Ingo Schiller announced his retirement for autumn 2022 and a little later the controversial president Werner Gegenbauer immediately retired after 14 years in office.

The eternal chaos days in the west end. A source of constant joy for outsiders, but an immense burden for the association and its members. "We are the most embarrassing club in Germany," said a sober member on Sunday.

Nevertheless, the members had eagerly awaited Windhorst. The controversial investor, who brought as much money as unrest to the club, was greeted hours before like a pop star. Before the start of his speech there was some turbulence, there was headwind. That was to be expected. He started several times against the loud roar of some. At some point it worked. In just under 15 minutes he then outlined his vision of a new Hertha and gave an update on his idea of ​​a big city club.

It sounded like this: "Socially, politically and strategically, it's a great thing if you manage to lead this historic capital club to greatness together. In Germany or, hopefully, beyond Germany's borders." The answer came immediately from the plenum. "Your time is over," yelled those who didn't want to see Windhorst in their club and, because of their anger, received a call to order from the leader of the meeting.

It was the first time that Windhorst spoke to the Hertha members. He had let the ticket cost something: 375 million euros, so to speak, and didn't want to spoil it now. Not from the Ultras, not from the others who railed against him with anger. He called them "a minority", registered the applause, seemed unimpressed. He must have seen worse. The appearance seemed to give the investor great pleasure. So much joy that he promised to stay. He announced it in his own way.

"Addressed to the ultras or whoever you are: Windhorst out - not possible, because that doesn't exist. Windhorst out - that's only possible if I sat on the presidency or on the supervisory board. Then you could vote me out," said he standing on the podium. "I'm a partner. It's a great honor for me to be a partner here with you..." He didn't get any further. Applause and "You're a stupid bum" echoed back from the plenum.

That didn't interest the man who put so much money into the club for so little profit. He will not go, but rather stay in the long term, "10, 20, 30 years" and, if necessary, chase fresh money again. The condition: "If there is a proper restart." Because that's the only way you can achieve your goals. "I want Hertha BSC to be extremely successful," he said to the applause of the members and revealed what drives him: "It's not about having a say in decisions, but I want to have a say in the discussion. The best idea wins. I also have one phone book and maybe can call people."

Windhorst let all the insults ricochet off him, once quoted former chancellor Helmut Kohl, under whom he was once proclaimed an "economic prodigy" before his numerous crashes, and boasted about Gegenbauer's resignation ("If I hadn't spoken out in April or something like that , there would have been no chance of a restart") and complained about the many rumours. He only found out about the alleged new coach, Sandro Schwarz, from the newspaper. An absurdity for Windhorst. However, he couldn't remember the coach's name.

At the very beginning, Thorsten Manske, who was still acting president of Hertha at the time, tried to mend the break between the old presidency and the investor. He offered Windhorst a new start for "the good of our club and in the sense of their investment". "I'll give you my hand," he called to Windhorst, who was listening in the front row. "Let's sail into better, respectful times. The future must begin here, today. It's a departure into a new era."

A new era that, that was the bad news for the Vice President, will begin without Manske. With a speech that one can describe as threatening with a guilty conscience, he maneuvered himself out of the way. He barely survived a motion to vote out, packed his things and left. Windhorst no longer had to worry about Manske's hand. It must have been a pleasure for Windhorst, who later complained about the bad cooperation with Gegenbauer - and thus also with Manske.

Now even the provisional president gone, only five of nine possible members in the presidency, still able to act. But no new president in sight. Elections will be held on June 26th. So far, only the former capo of the east curve, Kay Bernstein, has dared to come out of cover, who wants to bring the club back to the city and one. But that with the agreement is such a thing. These are only available on the investor's terms. They will not be able to be fulfilled. And he stays. "I'm not leaving here," said Windhorst towards the end of his speech. He left the stage a little later with his fist raised. The crowd thanked him with much outrage and even more applause. He didn't leave as a loser. 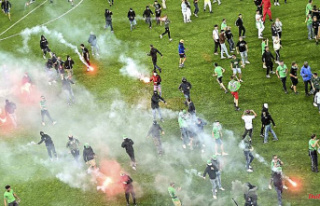