Isabell Werth doesn't give up that easily. 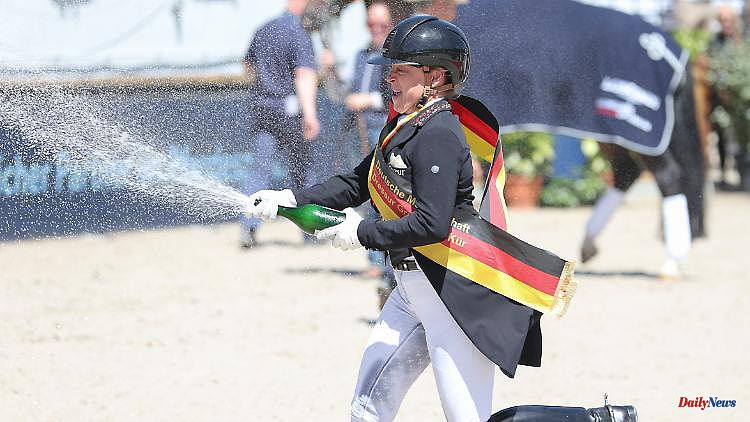 Isabell Werth doesn't give up that easily. After a disappointment in the special, the record rider hits back in the freestyle. However, she gets unexpected help. Her competitor Dorothee Schneider foregoes the horse Showtime, which Werth had suffered a severe defeat on Saturday.

One day after the disappointment in the Grand Prix Special, Isabell Werth was able to laugh again and squirt the winning champagne. The record rider won her 17th national title in the freestyle at the German Dressage Championships. The 52-year-old from Rheinberg won in Balve in the saddle of Quantaz with 85.450 percent. In the show jumping category, Mario Stevens secured the title with Starissa.

"We haven't yet had optimal relaxation, but Quantaz is getting better and safer," commented Werth after the freestyle victory. The most successful rider in the world said: "Yesterday I wasn't so happy. That was an instructive weekend." Second place went to Frederic Wandres from Hagen am Teutoburger Wald with Duke of Britain (83.375). Surprisingly, Ingrid Klimke was third. The eventing specialist from Münster received 82.825 percent for her ride with Franziskus and is now allowed to ride in the national dressage team at the CHIO in Aachen for the first time.

Werth benefited from a waiver in her victory: Dorothee Schneider's top horse Showtime, with whom the rider from Framersheim unexpectedly won the title in the Grand Prix Special on Saturday after a long break, was not used. The 53-year-old didn't want to overload her gelding, who had been sidelined due to an injury since winning team gold at the Olympic Games in Tokyo, after two tests and voluntarily gave up any further chances for the title. The couple is not part of the German team at the second World Cup sighting in Aachen either.

"Showtime is back," said Schneider about the comeback of the 16-year-old gelding, which was crowned with a win. "He's motivated, he wants to dance with me and he enjoys things." The two-time team Olympic champion enthused: "It was amazing how it felt. It's hard to put into words."

Again and again she had to wipe the tears from her eyes. The comeback victory "triggered emotions," explained the winner. "The joy just comes out. You don't want to hold it back."

For her ride to victory, Schneider received 83.686 percent from the judges. Surprisingly, second place went to Wandres, who received 79.981 percent with Duke of Britain. Isabell Werth made too many mistakes with Quantaz (78.216), who had to settle for third place. Defending champion Jessica von Bredow-Werndl (Tuntenhausen), who is expecting her second child, did not start.

In the show jumping category, Mario Stevens won the title for the second time. The 39-year-old from Molbergen in Lower Saxony won in the saddle of Starissa. After four laps, the 2018 champion remained the only starter without a mistake and won ahead of Philip Rüping from Steinfeld, who had a time error with Casallco. Third place went to Marcus Ehning from Borken with A la Carte, who was the only rider in the A squad in Balve.

"It's great that it worked," said Stevens. "He just jumped really well," he praised his nine-year-old gelding. Katrin Eckermann from Sassenberg won the title in the show jumping category with Cascadello-Boy.

1 Alpes de Haute Provence. Aquatic hike: A 50-year-old... 2 Saint-Martin-Bellevue. Haute-Savoie - 52 kilos of... 3 Cycling / Criterium du Dauphine. "I rode my bike... 4 Senators agree: US gun laws should be slightly tightened 5 Saint-Thibaud-de-Couz. Savoie: A wooden shelter in... 6 Bordeaux. During the pride march, a tank collides.... 7 Elisabeth Borne is well ahead in Calvados and in good... 8 Football in Nintendo style: "Mario Strikers"... 9 Mecklenburg-Western Pomerania: Fassbinder and Tolani... 10 Grenoble. After an apartment fire, a lightly injured... 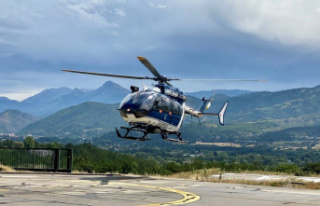