Alexander Zverev averts a sudden end at the French Open with great difficulty: the top German player initially sees no country against the only 21-year-old Argentinian Sebastian Baez. 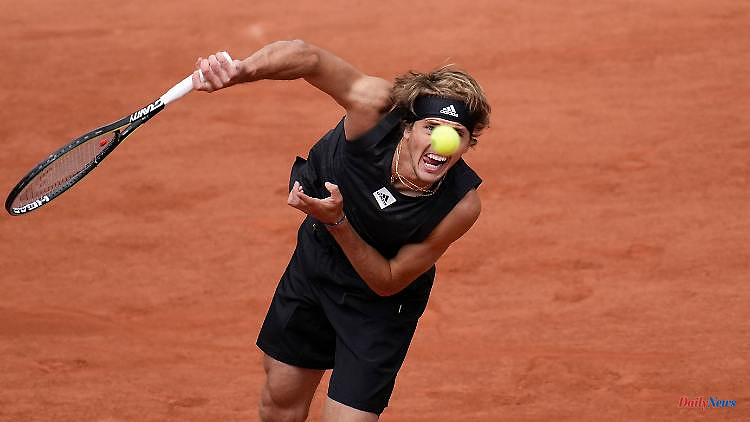 Alexander Zverev averts a sudden end at the French Open with great difficulty: the top German player initially sees no country against the only 21-year-old Argentinian Sebastian Baez. Then a real struggle to catch up begins. Angelique Kerber cleverly plays out her routine.

Alexander Zverev seemed completely at a loss, the top German player mocked his father in frustration - and then pulled himself together to an exhausting comeback victory: The tennis Olympic champion has the impending second-round knockout. averted with great difficulty at the French Open. The third in the world rankings from Hamburg defeated the initially furious Argentinian Sebastian Baez on Wednesday thanks to his strong physique 2: 6, 4: 6, 6: 1, 6: 2, 7: 5.

While the 25-year-old successfully worked hard so that he could continue the hunt for his first Grand Slam title, Angelique Kerber was already freshly showered in the belly of the Philippe Chatrier court and looked forward to her upcoming duel for the round of 16 with satisfaction. "Of course I'm looking further now and I want even more," said the three-time Grand Slam winner after she made it into the third round with bite and cleverness with a 6: 1, 7: 6 (7: 2) victory against the only 19-year-old Frenchwoman Elsa Jacquemot had managed.

Zverev, who now meets the American Brandon Nakashima or the Dutchman Tallon Griekspoor, and Kerber are the last two remaining German professionals in the field since Andrea Petkovic lost 1: 6, 6: 7 (3: 7). the former world number one Wiktoria Asarenka failed. For Petkovic it was possibly the last appearance on the Ashes of Paris. "It's really difficult to say," said the 34-year-old: "If it depended on my will, I would play for ten more years." At the end of the season you have to listen to your body.

This also applies to Kerber in Paris, who absolutely wants to use her momentum. But she resolutely pushes the dream of a career slam aside: "It's still too far away to even think about it." She could take the next step in that direction against Aliyaksandra Sasnovich from Belarus, who knocked out US Open winner Emma Raducanu.

Kerber, who is in the third round in Paris for the first time since 2018, defeated Sasnowitsch in three sets last week on her way to winning the title in Strasbourg. "It was a tough match and it won't be easy," said the left-hander, who had to fend off two match points in her opening game against Magdalena Frech from Poland.

But then she played her experience against Jacquemot - in contrast to Zverev, who was initially completely indisposed. "I would shake him up, provoke him," said his brother Mischa, who suffered at Eurosport: "He's waiting for Baez to give him a chance, but you have to force it yourself."

The thoughts seemed to be transferred, because then the best German tennis player found the highest gear, fended off a match point and cheered after a hard piece of work. The Benefits of Switching to Modern Style School Record...