Kevin Sinfield has officially completed his 101 Extra Mile Challenge in a bid to raise money for charity. Kevin Sinfield has officially completed his 101 Extra Mile Challenge in a bid to raise money for charity.

The run saw the rugby coach complete 24 segments of 7km over the course of 24 hours.

Who is Kevin Sinfield?
Sinfield is a former England rugby player who is currently the defence coach for the Leicester Tigers.

Born in Oldham, Greater Manchester, on 12 September 1980, the 41-year-old made his first team debut for Leeds at the age of 16.

Over the course of his career, Sinfield became a seven-time Super League champion, two time Challenge Cup and triple World Cup Challenge winner. He concluded his rugby league career as the most decorated domestic professional player in England history.

He is also the Super League’s record appearance holder and points-scorer. In 2014, he was given an MBE for his services to rugby league.

In 2016, Sinfield was appointed as Rugby Director of the Rugby Football League, and helped lead England to the 2017 Rugby League World Cup final.

Most recently, Sinfield was awarded an OBE in the 2021 Queen's Birthday Honours, for services to rugby league, and his charitable fundraising efforts.

In 2020, Sinfield ran seven marathons in seven days in a bid to raise £77,777 for ex-Leeds teammate Rob Burrow who was diagnosed with Motor Neurone Disease (MND) the year prior.

He managed to raise a whopping £2.7 million.

Sinfield joined the Leicester Tigers as defence coach ahead of the 2021/22 season.

Why is he running 101 miles?
Sinfield has embarked on a new fundraising challenge, inspired again by former teammate Rob Burrows.
The Extra Mile Challenge will see Sinfield run from the Tigers’ Welford Road ground to Headingley – the length of almost four marathons – non-stop inside 24 hours.

He began the route on Monday 22 November, with the run itself split into 7km segments which, Sinfield explains on his fundraising page, “must be completed within an hour before the next one starts on the hour”.

Originally the route was going to cover 100 miles, but in reality the final distance is actually 101 miles, hence the name of the challenge.

The money that Sinfield raises will be split between two charities - the MND Association and the Leeds Hospitals Charity appeal to build a new care centre in Leeds that will bear Burrows’ name.

Sinfield completed the challenge at 8:30am this morning (Tuesday 23 November), right on schedule with his timetable.

“Congratulations Kevin. What you have done in the last 24 hours has been truly remarkable. We will never forget it Sir Kev. You are our hero. Thank you for everything.”

Sinfield has said that he has been overwhelmed by the response to his fundraising challenge.

After arriving at Harthill, he posted a video to the official Leeds Rhinos Twitter account where he said: “We’re 13 in, thanks to everybody who has given so far. You’ve made a huge difference.

“The support has been incredible.

1 Continue the holiday feasting with Hanukkah’s potato... 2 WHO Europe warns of possible surge in COVID deaths... 3 ‘Mama, are you OK?’ In Waukesha, minutes of terror... 4 Language barrier: Immigrant parents tell tales of... 5 Fighting gas prices, US to release 50 million barrels... 6 The Santa experience this year is a mix of laps, distancing 7 Minnesota National Guard to reinforce nursing home... 8 Kevin Spacey ordered to pay $31M for ‘House of Cards’... 9 Auckland lockdown to end as New Zealand tries new... 10 No sanctions over deficiencies at California virus... 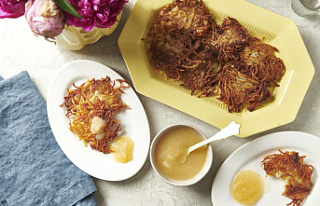