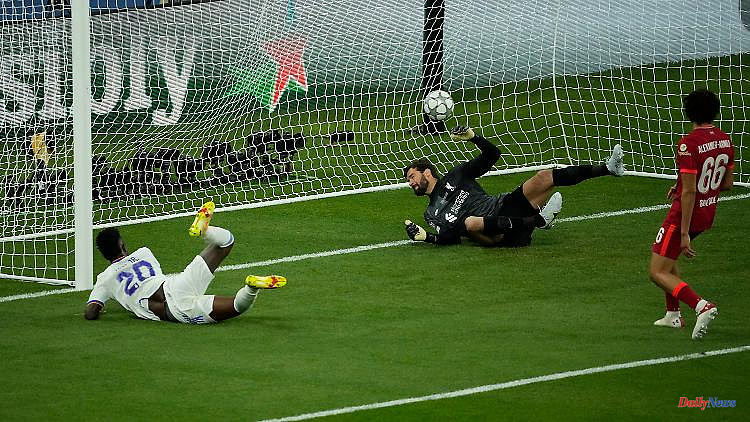 Liverpool FC dominates the Champions League final - and Real Madrid wins it. Their goalkeeper Thibaut Courtois shows an outstanding performance, makes the Reds more desperate with every save. However, the final is overshadowed by chaos at the entrance, which the fans have to suffer for.

First fan chaos, then royal triumph: record winners Real Madrid conquered the European football throne in the delayed Champions League final in Paris and Jürgen Klopp denied the handle pot. Vinicius Junior (59th) and the incredibly strong goalkeeper Thibaut Courtois led Real in a 1-0 (0-0) win against Liverpool to their 14th victory in the most important European cup - title collector Toni Kroos closed with his number five to Cristiano Ronaldo, in Germany he is the lonely number one in this statistic.

However, the finale will have an aftermath due to dangerous scenes and a tough police operation at the entrance. 75,000 spectators streamed towards the Stade de France - there were huge security problems in front of the gates to the Liverpool curve, so the kick-off was delayed several times by a total of 37 minutes. After hours of waiting, fans broke through chains of folders and climbed over fences, according to AFP, the police used tear gas several times. It was not immediately known whether people were injured.

The day had started harmlessly. At 20 degrees, tens of thousands of Liverpool fans sang and drank themselves warm at noon. The hit of the party on the Cours de Vincennes in the east of the city was the Klopp song: "Im so glad, Jurgen is a Red" to the Beatles melody of "I Feel Fine". 200 Real Ultras took the ship across the Seine and lit Bengal fire in front of the Eiffel Tower.

The game then quickly became fast-paced. Klopp remained relatively calm at the line while his side struggled for control and appeared more determined. Mohamed Salah (16th) had the first good chance of falling, Sadio Mane, who was hotly traded at Bayern Munich, only hit the inside post (21st) because Courtois reacted terrificly for the first time.

On the other side, Ibrahima Konate and Virgil van Dijk kept the Real offensive on a short leash, and the 2014 world champion Kroos didn't calm down at first, but later played safely as usual. The through passes to super scorer Karim Benzema or Vinicius were initially intercepted, Liverpool recorded 8-0 shots on goal.

Nevertheless: After half an hour, the royals had arrived in the final, they spread the game better. After minutes of video evidence, referee Clement Turpin (France) denied a curious ping-pong goal by Benzema because he was offside (45').

Statistically, both teams could easily persuade each other that they hoped for the title. Real had won their last seven premier class finals - but also lost for the last time in 1981: against Liverpool. In Paris. This time St. Petersburg had been deprived of the final because of the Russian war of aggression in Ukraine, Paris stepped in with the Stade de France.

The Reds fans continued to push their team forward after the break. This time Madrid was awake from the start and built on the good final phase of the first half, but goal danger continued to radiate almost exclusively from Liverpool, Trent Alexander-Arnold was a constant source of unrest. Carlo Ancelotti therefore hit his chewing gum hard with his jaw - but then the Real coach cheered: Vinicius Junior actually scored the first shot on goal.

It was a salvation for Los Blancos. All of the colleagues rushed towards Vinicius, and the substitutes ran onto the pitch as if insane and celebrated the Brazilian. Klopp and Liverpool were challenged, they went ahead after a short shock phase - but Courtois parried three more times in a private duel against Salah (64th/69th/82nd). Real didn't take advantage of the counterattack opportunities, which kept Liverpool in the game until the end. 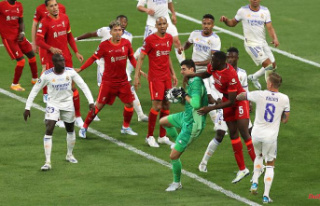 The CL final in a quick check: The "shitty news"...