At the World Championships in Athletics, there are also dramatic moments apart from the finals of the sprinters over 100 meters: a Chinese shaves a few decisive centimeters in the last attempt and a German runner falls badly,. 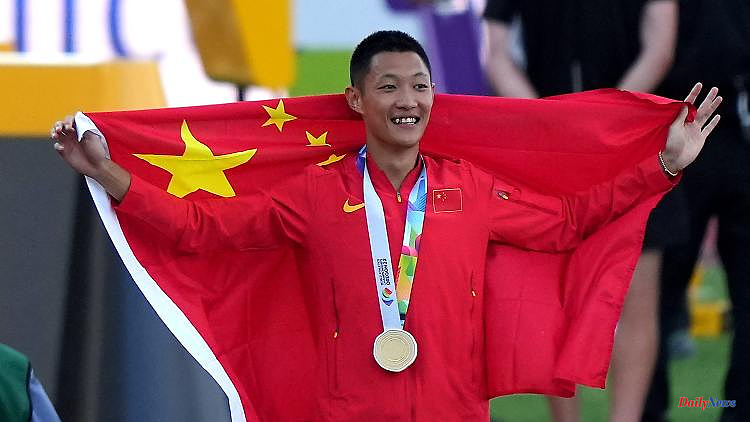 At the World Championships in Athletics, there are also dramatic moments apart from the finals of the sprinters over 100 meters: a Chinese shaves a few decisive centimeters in the last attempt and a German runner falls badly,

The triple triumph of the US sprinters in the final over 100 meters crowned the second day of competition at the World Athletics Championships in Eugene, USA. Fred Kerley became world champion ahead of his compatriots Marvin Bracy and Trayvon Bromell. In the long jump, a Chinese produced a historic triumph for his country in a real thriller.

100 meters, men: gold, silver, bronze for the US sprinters. Top favorite Fred Kerley won the 100m final in 9.86 seconds ahead of fellow countrymen Marvin Bracy and Trayvon Bromell, each clocking a time of 9.88 seconds. Bracy got silver, Bromell got bronze. "We said we're going to do this and we did it. USA, baby," Kerley said over the stadium mic. It was the United States' third time in the 100-meter gold, silver and bronze and the first since 1991, when Carl Lewis, Leroy Burrell and Dennis Mitchell did so in Tokyo.

100 meters, women: The German champion Gina Lückenkemper mastered her lead over 100 meters with confidence. The 25-year-old sprinter from SCC Berlin finished third in 11.09 seconds. The second place in the European Championship moved into the semi-finals on Monday night (2:33 a.m. CEST/ZDF). On the other hand, Alexandra Burghardt from Burghausen, who placed fifth at the Olympics, was eliminated in round one. The 28-year-old finished sixth in just 11.29 seconds. The fastest sprinters in the heats were Britain's Dina Asher-Smith in 10.84 seconds and defending champion Shelly-Ann Fraser-Pryce from Jamaica in 10.87 seconds. Olympic champion Elaine Thompson-Herah from Jamaica took it easy in 11.15 seconds.

Long jump, men and shot put, women: The title in the men's long jump was won by China's Wang Jianan with 8.36 meters in the last attempt. The 2015 World Championship bronze medalist passed the long-leading Greek Olympic champion Miltiadis Tentoglou, who jumped 8.32 meters and was unable to counter Wang Jianan's gold jump in the last attempt of the competition. The Swiss Simon Ehammer won bronze with 8.16 meters. It was the first world championship gold ever for a Chinese long jumper.

In the women's shot put, favorite Chase Ealey gave hosts USA the title with 20.49 meters. Olympic champion Gong Lijiao from China shot ten centimeters shorter and had to be satisfied with silver.

3000 meters obstacle: The two-time European obstacle champion Gesa Krause has reached the final with a lot of luck. The 29-year-old, third in the 2019 World Cup, qualified with a time of 9:21.02 minutes. This put her in 15th and last place on the grid for the medal race on Thursday night (4:45 a.m. CEST/ARD). She was only eight hundredths of a second ahead of the next-placed runner. "That was really sharp," said Krause.

A spectacular fall ended Lea Meyer's hopes for the final after just 400 meters: The 24-year-old from Cologne got caught on an obstacle with her spikes and fell headfirst into the moat. She got up and finished eighth in 9:30.81 minutes - the respectable time caused Meyer even more frustration: "It hurts even more because it confirms that I'm in top form. On the one hand, it's nice to see that I've sold well, but it hurts a lot to see what could have been," she said on ZDF. "I didn't approach the hurdle aggressively enough. That was stupid and annoying." And later gave an insight into her first thoughts after the fall: "When I was down in the water and opened my eyes, I thought for a moment: So, is the backbone still whole?"

400 meter hurdles: World record holder Karsten Warholm easily won his lead in 49.34 seconds and reached the semi-finals. Due to a thigh injury in the first race of the season in Rabat at the beginning of June, his ability to perform was questionable. In the run-up to the title fights in the USA, the Norwegian seemed fit and without restrictions. At the Olympic Games in Tokyo he had won with a fabulous world record time of 45.94 seconds.

1500 meters: For the German champion Hanna Klein from Tübingen, 4:04.62 minutes in the semifinals was not enough to reach the final. Munich's Katharina Trost also missed progress with a time of 4:05.85 minutes. 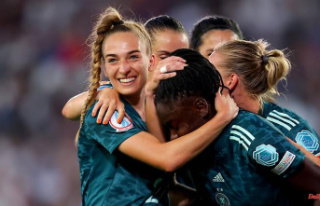