And again Wembley is the place of destiny: for Germany, which again loses a final. 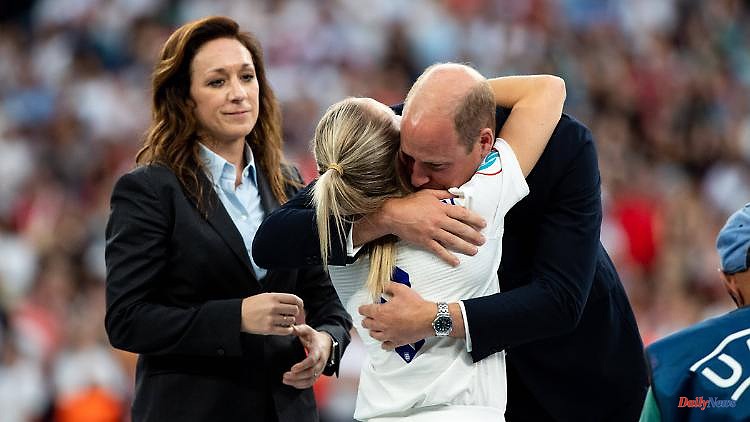 And again Wembley is the place of destiny: for Germany, which again loses a final. For England, finally bringing football back home after 52 years without a title. The party is gigantic. Breaking royal protocol becomes a side issue.

Everything was allowed on this Sunday evening. Or, more precisely, everything was tolerated. England celebrates "Football is coming home" and even ignores royal protocol in the frenzy of bliss. Lionesses Captain Leah Williamson actually hugs Prince William at tribute to the new heroines of the redeemed nation! That's actually not possible. Because the future king is untouchable. But now Leah Williamson can be acquitted of the urgent suspicion of having deliberately allowed a royal assault here. The prince, more of a man of the people, liked to be hugged. Maybe he even wanted to? He, too, enjoyed being freed from the heavy burden of not having a title.

In Wembley, in this historic football temple of all places, the lionesses broke the spell. 52 years after Geoff Hurst and what is still the most controversial goal in football history (closely followed by Thomas Helmer's phantom goal), England are celebrating another major title. After 120 brutally intense minutes, the stadium trembled, the players trembled, a nation trembled. And the German team also trembled a little bit.

Because once again there was excitement in Wembley, but it will not reach historical dimensions. After 25 minutes Williamson got the ball on his outstretched arm and prevented a goal for Germany. The referee had overlooked that, the VAR did not recognize a clear wrong decision. Unlike the national coach. She was annoyed. A lot. But then congratulated fairly.

What game was that? Duel followed duel. Instead of dribbling almost only duels. Instead of pass relays, many provocations. Especially in the last few minutes. The English women cavorted on their right attacking side. Very close to the outline. They took out one throw after the other. And used every opportunity to rob the ticking clock of as many seconds as possible. That wasn't nice. Not unfair either. Clever is probably the best way to say it. grueling too. Then the final whistle, the salvation.

Germany's heroines, who first had to cope with the bad news of Alexandra Popp's absence and lost their goal scorer and tireless driver Lina Magull in extra time (replaced due to injury), sank to the ground. they cried. Like the English women. Tears of disappointment mixed with tears of happiness at Wembley. Just a year after the men's dramatic defeat of Italy in the European Championship final at this venue, the Lionesses now have history on their side.

And they forgot everything. Not just respect for royal protocol. They forgot the suffering on the pitch because after a strong first half, the Lionesses were anything but snappy. Coach Sarina Wiegman's team couldn't find any good solutions against the now aggressive DFB pressing. And the longer the game lasted, the braver the Germans became, who, however, missed a target player like Popp beyond measure, the more the fear crept into the bones of the lionesses that they would sneak off the field again without a title. Almost every pass wobbled like a lamb's tail. But the DFB team lacked the precision to take advantage of the opponents' nervousness and lack of strength.

So the game wobbled back and forth. Again and again interrupted by crashing bodies in heated duels. Nobody here had a cool head anymore. Not even the Ukrainian referee, whose line oscillated between generous and petty on both sides. With no apparent plan. No, it was rarely a high-class finale. An exciting always. And so it was not a delicacy that decided the finale, but a powerful action. Chloe Kelly, the high-energy substitute, pumped the stadium to maximum volume in the 110th minute, arms waving. A wave of power that swept from ranks onto the field. After a corner, Kelly rustically blocked the way and somehow poked the ball over the line with the pike. pure ecstasy.

What an emotional union of the team with the nation, represented by tens of thousands of fans in the mystical temple of football history. And when coach Wiegman became emotional in the stomach of the steel giant, thinking of her dead sister, her players stormed the press conference. They stormed the podium and the counter. "Football is coming home". No, "Football is at home".

1 Formula 1 lessons from Hungary: Ferrari self-destructs... 2 She probably couldn't swim: young couple found... 3 Body drifted in the lake for days: Dead 14-year-old... 4 Thuringia: Talks about reconciliation of interests... 5 Saxony: future of the water connections in Neuseenland... 6 Saxony: e-bike driver dies in a collision with a car... 7 Hesse: Before the next heat wave: thunderstorms at... 8 Hesse: Saving energy in the winter semester is a topic... 9 Hesse: fire in apartment building: woman dead 10 Hesse: Partial construction freeze on the A49 construction... 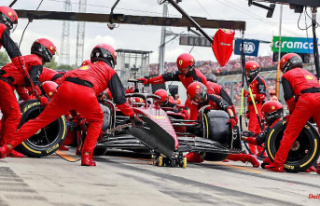