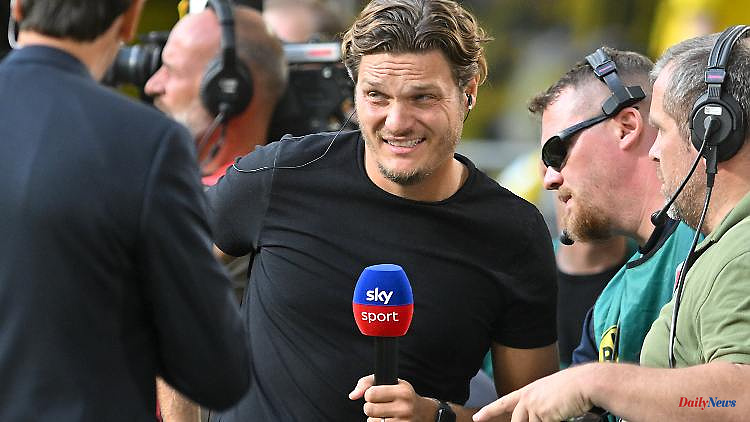 FC Bayern is impressive, Borussia Dortmund is struggling to follow suit. The title rivals experience very different games at the start of the new Bundesliga season. But BVB is intoxicated by making the hard work the core issue.

A few deposit collectors had set up in front of Dortmund Central Station on Saturday afternoon. They wanted to benefit from the new euphoria in the city. The radiance of BVB promised them good business. So there they were, in black and yellow, loudly supporting the singing from the tape. "Borussia give us the bowl, give us the bowl in May." The longing for the championship is huge in the Ruhr metropolis. Traditional. But a little more before this season. Because "Buddy Edin" (Editor's note: the new BVB coach is Edin Terzic) is back on shift. And the remarkable victory against TSV 1860 Munich in the DFB Cup had triggered the anticipation of the first game in the Bundesliga.

Bayer Leverkusen was a guest. Such a brother in spirit. Because the Werkself also traditionally pursue big goals and in the end have to admit that once again it didn't work out. The championship isn't the declared goal this season, but it's also not a taboo subject. Bayer is intoxicated by its strong squad, which did not lose any significant quality this summer and was reinforced by a top talent in Adam Hlozek. And how justified the trust the club has in its players is what they demonstrated in front of 81,135 spectators in the sold-out Signal-Iduna-Park. Although the extremely intense duel with BVB was lost 0:1 (0:1), Marco Reus poked the ball, which Karim Adeyemi, who was later replaced injured, had placed there exactly, after ten minutes over the line, but was just in the second half the team was superior at times, only missing one goal.

There were several chances. Even the very best. But striker Patrik Schick, who is the top candidate for the top scorer in the absence (because of a change) of Erling Haaland and Robert Lewandowski, failed twice from the best positions at BVB keeper Gregor Kobel. At other moments, the Black and Yellows threw themselves in between, putting their legs and bodies into the wild shots of the Leverkusen team. You must be 11 laborers! And 11 laborers they were.

In the country's largest football temple, passion became the highest good, while football became more of a side issue. At least the beautiful, fast and purposeful form of it. But they were satisfied. In the stands, on the lawn. And down there, they stressed how much that enthusiasm and greed would relate to Terzic pacing up and down the temple like a tiger. From the sideline to the bench and back. The constantly clapping and motivating. And finally it was zero again. A rarity last season, weighed down by a severely crippling melancholy - like a drug that causes a lousy trip - that Borussia had trotted and trotted out of.

Marco Rose was over after just one season. The coach never arrived in Dortmund. He joins a long line of professionals who, while possessing outstanding know-how, never conquered the hearts of this ultra-emotional club, so sustained by the unconditional love of its fans. And they were willing to forgive. They were ready to receive their boy, the Edin, once a child of the curve himself. Finally in the full living room. In full roar. The coach didn't know the thunderous pressure from the stands. His boss was pandemic time. Terzic and the fans speak the same language. A simple one, it's the language of the district. The language of the workers. At his presentation he said: "Let's be as hungry as never before, let's work as hard as never before. But let's also be as positive as never before. And most importantly: let's be as loud as we can never." words for the heart.

Words followed by action against Leverkusen. The Dortmund team, which in recent years was repeatedly confronted with the grueling question of mentality and sometimes countered it with rants, ran, fought and straddled. Even Marco Reus led defensive duels with a hitherto unknown verve. Terzic was happy about that. He clenched his fist on the line when the rustic element was successful. Borussia's game wasn't nice. Sure, there was a good phase between the 5th and 25th minute, but the talent that was dormant in the creative offensive shone more gray than black and yellow (in Dortmund that's the synonym for radiant). Terzic really liked that. "Sometimes it's not possible to score more goals than one - then you have to be able to defend the zero to take the three points." And the way we had his team done that made him "positive".

As a reward, the pimped star ensemble in the labor shirt was allowed to pick up the love greetings from the south stand. There stand the most faithful of the faithful. Even during the game they had the perfect feeling for the needs of the team, turning up the volume when the team wobbled. "The spectators supported us in some situations. The extra percentage to give everything came from the ranks and that's excellent," Terzic was amazed and praised.

The fans give this team a very generous credit. The portal "schwatzgelb.de" had even assured before the season that the fans would "keep their feet still" in difficult phases. For Edin. The trust in him is gigantic. The longing that there is finally someone who pushes away the ever-burdening Jürgen Klopp cloud even more gigantic. A man for success and people. And the fans had carried their great enthusiasm for the new BVB through the streets of the city before the first league kick-off. The black and yellow Lindwurm made its way from the "Alter Markt" through the clinic district to the stadium. Several thousand ran along, roared along, looked forward to what was to come - and stayed decent. Just as the ultra group "The Unity" had proclaimed.

What comes next? intense work. The new old coach, who won the DFB Cup with BVB as an interim in the 2020/21 season, had seen many topics. About the orderly game structure. Only Jude Bellingham seemed stable under pressure. The 19-year-old Englishman is the biggest phenomenon and talent in the squad. He takes control of the game, with dribbling, with tightening or calming passes, but also with tackles. He needs to control his emotions a little better, says Terzic, otherwise his third captain is just trying to figure out where his limits are. Current suspicion: It doesn't exist.

What's next? A new striker, presumably, as sporting director Sebastian Kehl clearly stated. A top solution suddenly seems realistic: Edinson Cavani. Before kick-off, Terzic said of the Uruguayan: "You don't have to say a lot about him. If you look at his quality and the stations - an outstanding striker. It's important that we find the right solution that suits us."

For the game against Bayer, BVB "first wanted to find an internal solution". Her name was Youssoufa Moukoko. He prepared the goal of Reus with prima. The former child prodigy worked a lot for the team and off the ball. He found it harder with the ball. He revved up nicely a couple of times and when he could pick up speed it became dangerous. But as a target player, he bounced off the giants Jonathan Tah and Edmond Tapsoba all too often. Like the Romans once on Obelix' belly.

In the absence of Sebastien Haller, who is suffering from cancer, BVB still needs a crusher up front in order to keep the national and international goals within reach for as long as possible. Is the championship really within reach? FC Bayern's appearance at Eintracht Frankfurt (6-1) raised questions in this regard. The first answer from BVB: drawn level on points and wins - not after a grotesque spectacle.

But Terzic makes a huge detour around this topic. He's doing well. On the 1st day of play, no one has yet become a champion. Likewise, nobody has fallen out of the title race on the first day of the game if they had serious ambitions. Consistency is the keyword. And focus. That didn't apply to the game for a short time on this Saturday evening. An announcement by the police kept the viewers busy for almost half an hour. The officials asked not to leave the stadium after the final whistle. There is a corresponding use in the area around the arena. A car with its engine running was discovered in a parking lot.

As a police spokesman explained to ntv.de about an hour after the end of the game, the situation had been "fixed" but not resolved. Further investigations are still pending. Later that evening, it said: "Two empty holsters for firearms" were found inside the car. "As part of the further inspection, the owner, who was also the driver of the vehicle, was identified and found in the stadium. He was taken into custody and questioned. All dangerous situations were eliminated." The owner is the holder of "a small gun license". The spectators had long since left the stadium.

But they will come back. Because of BVB. And because of Edin. At the train station, the deposit collectors had disappeared late in the evening. The master chants fell silent. The euphoria grounded. But the people in their black and yellow shirts, they were happy. The honest work is back in the old industrial town. And she's here to stay. "If at the end of the season a team is better than us in a competition, then we must and will accept that," says Terzic. "But what we won't accept is if someone is hungrier than us, or more diligent. We'll remind the team of that in every training session." 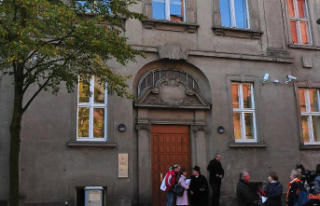