Next DFB drama about Reus: World Cup question mark: where to go with Müller, Kimmich and Götze?

The countdown is running. 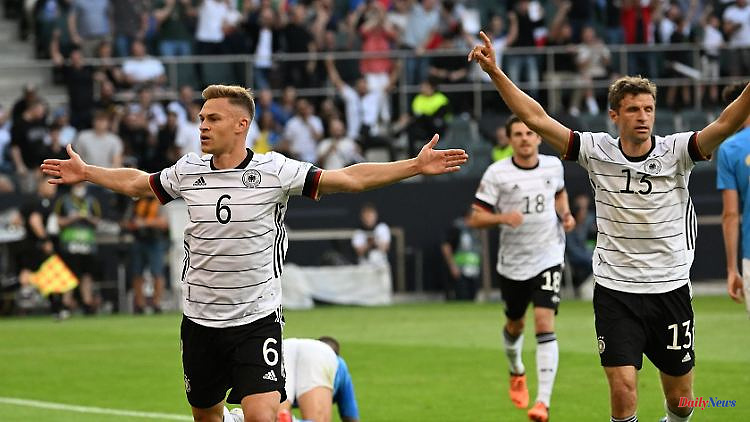 The countdown is running. Hansi Flick will nominate his final squad for the World Cup on Thursday afternoon. He can and will take 26 players with him. Most recently, assistant coach Danny Röhl announced that large parts of the squad were already clear. Surprises and celebrity disappointments cannot be ruled out. ntv.de looks again in advance at the biggest questions in the DFB team.

How is the situation in the gate? The hierarchy between the posts is clear. If, yes if, the nation's shoulder stands firm. There is no getting around Manuel Neuer, as national coach Hansi Flick made very clear when he was at Bayern. But the situation is like this: just like eight years ago, before the triumph in Rio, the body twitches, the titan's shoulder twitches. On Saturday he made his comeback against Hertha BSC - after that he was happy that everything went well. Even a little shock from training when he fell on his healthy shoulder and felt pain has been digested. "I thought for a moment: oops, what's going on now?"

The German goalkeeper question only becomes exciting if Neuer has to pass. With Marc-André ter Stegen, the German "Prince Charles", the number 1b has been in the queue for ages and would be the logical number two given the history and of course his performances at FC Barcelona. But there is a small problem: Kevin Trapp is playing a phenomenal season with Eintracht Frankfurt and should also make very justified claims if the insatiable newcomer is actually absent. It is still unclear who will be the fourth man, Flick plans. In the mailing list: Oliver Baumann and Bernd Leno. Let's put it this way: This personality will not decide about the weal and woe of the World Cup. Since it has been repeatedly reported in the past that the atmosphere between Leno and ter Stegen does not fit, that could be the deciding factor. Especially since the national coach and his team also take such things into account when selecting the squad.

How is the situation in defence? The zero must stand. It's that simple. But the situation in defense is actually less simple. The need is said to be so great that Flick is said to have even approached ex-national player Jonas Hector in the past few weeks. But the man from Cologne ruled out a comeback and once again reminded the national coach of Joachim Löw's leitmotif. You can't "carve" a left-back, he once said, referring to Dortmund's Marcel Schmelzer. At the 2014 Brazil World Cup, he answered the question of full-backs with four central defenders.

A conceivable model for Qatar too? Yes of course, why not! With Real Madrid's (still injured) Gladiator Antonio Rüdiger and Mats Hummels, who has regained his strength and has a strong opinion on the team mood, there is a heroic bastion in the center. Admittedly, that wouldn't be the quickest way. The inner block could be flanked by Dortmund Hummels colleagues Nico Schlotterbeck (left) and Niklas Süle (right). The former Munich player knows from first-hand experience how to win titles as a right-back. At Bayern Munich he filled the role often and well! Trainer then: Hansi Flick. It would also be possible, if Hummels weren't there at all, for Joshua Kimmich to shed his Bavarian pride and face the unloved task in the chain again. He can do that. Maybe better than anyone else in the squad. But he is Kimmich.

But who is there anyway? Ridle Baku from VfL Wolfsburg? Or Mitchell Weiser from Werder Bremen? Both have been in great form lately. And in the RTL interview, Flick had let it be known that players who had not previously appeared could also be considered. But let's put it realistically: Your nomination(s) would be a sensation. Other options: central defender Matthias Ginter, the in-form Freiburg, Jonas Hofmann, the polyvalent Gladbacher, or Thilo Kehrer, the all-rounder from West Ham United. Tried everything, found suitable. But never branded as the royal solution. After moving from Hoffenheim to Leipzig, David Raum is taking the sporty Nico Schulz path. This is not a good way. Robin Gosens, the 2021 high-flyer, has long landed hard at Inter Milan.

How is the situation in midfield? Actually fantastic. With Jamal Musiala, Germany has the global football sensation in its ranks. Alongside England's Jude Bellingham, he is likely to be the biggest "rising star" of the tournament. And if Louis van Gaal had anything else to say (he does, but only with the Dutch), it would be this: Musiala always plays. He must. Because he's the best and most in-form man. Because he's unpredictable. Because he can dribble, prepare and score. A fantastic package. But where is he playing? On the eight? On the ten? And then who has to go? Thomas Müller maybe, the national player with the best grades (according to "Kicker"). Well, he's still ailing and not fit. That would be a good argument. But the 33-year-old also offers something special: strong communication skills, pressing power and brutal experience.

The lineup in midfield will be an exciting puzzle. Especially since it is also clear: In addition to Musiala, Leon Goretzka always has to play. No player runs between the two penalty areas as dynamically and profitably as the Bochum native. He is the Power Tower in the German game. Kimmich has always been at his side (see above and below). A bilious strategist, but not a scoop. Such a real six that is missing. Unioner Rani Khedira is said to be on the list, which is only half secret. A laborer, a compactor, a living stop sign. Like his brother Sami, who became world champion in 2014. Also a man who can do that: Sebastian Rode. The mentality and work monster from Eintracht Frankfurt is physically unstable, but athletically an asset. Because he is tireless, greedy and never and never spares himself. But then there's still Kimmich. Who is set, but who sometimes holds the ball too often and behind whom gaping holes open up when the ball is lost. Maybe back right? Ah, the ego!

But back to Frankfurt: What about Mario Götze? The furious playmaker is talked about in the DFB team from all sides. Hymns upon hymns are sung about his resurrection. As an eighth, he inspires the game of his team. This role would not have been intended in Flick's 4-2-3-1 system. As a joker then? Could be a good idea, nobody knows that better than the national coach. In addition, İlkay Gündoğan would be there for the offensive eighth role. Where are you going with him? It's the eternal question. As a six he is given away. And as offensive as he plays (and shines) at Manchester City, he is almost never used in the DFB team. Few discussions on the wings: there play difference footballer Leroy Sané and the fickle Serge Gnabry. Or Musiala when Müller plays in the middle.

How is the situation in the storm? Timo Werner is missing. This is bad. Because he scored a lot of goals under Hansi Flick, but also missed a lot of chances. In Leipzig, however, Werner was doing very well recently, which was due to coach Marco Rose. Well, never mind. He can't join. Which begs the question: who is doing it? The most obvious and therefore most likely solution: Kai Havertz. The Londoner has offered himself for the role several times. He also brings everything with him. Outstanding ball control, an outstanding shot and a good header. The crux: Havertz acts less like a classic nine and more like a hanging tip. This often leads to an absence in the important room.

Two players without any experience suggest themselves as alternatives: Dortmund's sensational teenager Youssoufa Moukoko, who is getting better and better as the World Cup approaches. The game against VfL Bochum on Saturday was an outstanding application. Bremen's Niclas Füllkrug has also sent plenty of them this season. Flick saw them and announced that the 29-year-old has something that the DFB team does not yet have. Probably also there: Lukas Nmecha from VfL Wolfsburg. The beefy striker has also started the season well and is valued by Flick. In the meantime, the offensive all-purpose weapon Pascal Groß is waiting for a call in Brighton. He even scores as a right-back.

And otherwise? The next big drama is imminent. And again it threatens Marco Reus. The Dortmund captain's body has always been fragile. And especially when a big tournament is coming up. This outstanding player, who could have been one of the greatest in German history, will probably be one of the most tragic. It's still a game of time, but more likely drama than a happy ending. His career remains a big "should have". Shame for one of the country's biggest international stars. After all, a squad spot seems reserved for another Dortmunder, the eternal promise Julian Brandt. Because there should also be flicks for one of the great secret hopes.

He's still doing his laps on the side pitches at the BayArena in Leverkusen, but he could soon come up trumps in Qatar: At least that's what Flick hopes when he thinks of youngster Florian Wirtz. The super talent from Bayer Leverkusen has not been able to play for six months due to a cruciate ligament rupture, but somehow he should still go to Qatar. Its qualities undermine the principle of performance. But well, that was always the case in German football history.

1 "Worrying development": Banks are arming... 2 A look at society: Women are getting through the pandemic... 3 "Glücksatlas" sees rays of hope: The Germans... 4 He never watched "Let's Dance": Ekaterina... 5 After suspension for impersonating Musk: comedian... 6 Federal states in comparison: Where gas is most expensive 7 Baden-Württemberg: Skiing on the Feldberg is becoming... 8 Saxony: driver found lifeless in his car after an... 9 Thuringia: Significantly more abortions in the second... 10 Mecklenburg-Western Pomerania: Association for the... 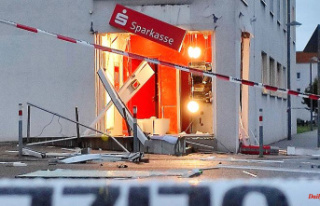