At 34 and with all sorts of records under his belt, Robert Lewandowski has few dreams left. 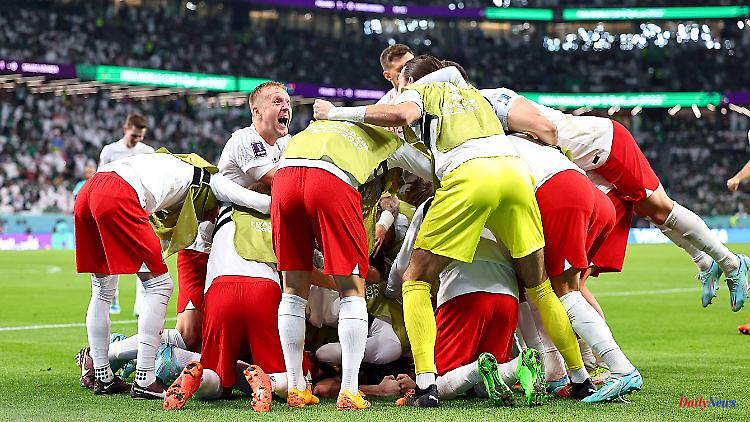 At 34 and with all sorts of records under his belt, Robert Lewandowski has few dreams left. He fulfilled one of them in the World Cup match against Saudi Arabia. Poland's 2-0 is a wonderful football game, but there is an ugly incident off the field at the end.

Robert Lewandowski was at the bottom. His teammates piled on him and wouldn't let him go. When they finally rose, a tearful Polish captain emerged from underneath. The 34-year-old had just shredded his goal curse. With a classic Lewandowski, he scored his first goal at a World Cup. It was the decision in the 2-0 (1-0) victory of his national team against Saudi Arabia. "Dreams from my earliest childhood have been fulfilled. It was so meaningful and important to me," he said. It was deeply believable.

Qatar's neighbor caused one of the biggest sensations in World Cup history in a 2-1 (0-1) win against Argentina. And a national holiday and days of cheering on the Saudi TV stations. Coach Hervé Renard was busy dispelling rumors ahead of the game. The government of the kingdom gave each player a Rolls Royce out of gratitude, it said. Renard disagreed. But in the Kingdom, the World Cup was within reach. Whoever beats Argentina has no more opponents.

They had fallen into a huge pot of self-confidence. And so they performed at Education City Stadium, which was occupied almost exclusively by Saudis. Whipped on by frantic fans, Saudi Arabia charged in the first few minutes, running at anything and everything that moved. Pumped up like that, they took Poland by surprise. They could thank keeper Wojciech Szczesny, the player of the match. In the 13th minute he touched a shot by Mohammed Kanno decisively.

The Poles soon reacted with semi-legal harshness. Your ears probably hurt from all the noise. A Saudi Arabian player was constantly lying on the ground, and Brazilian referee Wilton Sampaio was constantly fumbling with his breast pocket. Map here, map there. He dealt four big cards in a matter of minutes with great theatrics. The Lewandowski team forgot about football to save their tournament. Saudi Arabia forgot about football and maybe gave the tournament away. They had identified Poland as the group's weakest opponent before the game and were now surprised in their turn.

Robert Lewandowski disappeared completely. At least from the center. He kept dodging on his wings. The tussle continued, and soon Sampaio was also handing out yellow cards to the bench. At times there was no longer any talk of a football game. The Biało-Czerwoni, the White-Reds, had wrested their opponent's self-confidence by force. After 39 minutes they reaped the fruits of their insecurity campaign.

Robert Lewandowski was back, beating keeper Mohammed Al-Owasi with a lob that carried him to the touchline rather than to celebrate. There he picked up the ball again, put it back in the middle and Piotr Zielinski scored to make it 1-0. A defensive stupidity by Poland, an unnecessary penalty by VAR decision in the 45th minute, did not bring the Saudis back.

Szczesny parried Argentina hero Salem Al-Dawsrai and the follow-up shot with a save against Mohammed al-Breik. The Juventus keeper showed an incredible reaction, putting his hand on the ball from close range and deflecting it over the bar. Poland still in front. Sampaio still had time. He handed out another yellow card. The first half lasted 56 minutes.

Then the furious second half began. The game went back and forth. It went from box to box. Saudi Arabia tried it playfully, Poland convinced with good transition moments. Both teams came up with big opportunities. Poland always had more of the game and so Lewandowski was able to break his eternal curse. His 77th goal in 136 internationals. His first at a World Cup. One of his last big goals as a player. He will never become world champion, and neither will world footballer.

The Bundesliga had regularly destroyed Lewandowksi. He broke every conceivable goal record and almost even the unthinkable, Gerd Müller's all-time record. 365 Bundesliga goals to Lewandowski's 312. He was still missing two seasons when he left Germany this summer. Bayern Munich no longer really wanted him and the Poland captain was more than happy when the transparent haggling over him was finally history at the beginning of July. Since then he has been on order for the Catalan megalomaniac club FC Barcelona, ​​which offered the 34-year-old the chance for a new league.

The last few weeks have been a series of minor and major setbacks for Lewandowski. Out in the Champions League with Barcelona, ​​against Bayern of all places, then his first dismissal in almost ten years. In the Spanish league against CA Osasuna he saw yellow-red and then extended his winter break. His boorish behavior afterwards resulted in a three-game ban. And then there was the missed penalty in the game against Mexico. Then everything turned in his direction.

Lewandowski may now have even more opportunities to score. With four points, the Poles are in a promising position before the last group game. Everything is possible for them in the game against Argentina. The duel between Lewandowski and Messi is wide open. "Everyone is happy for Lewandowski. What a burden has been lifted from him," said Maciej Jankowski, one of the few White-Red fans who traveled with him. Wearing the number 9 shirt, he stood amid frustrated Saudi fans after the game: "The team did everything for him. That was so important."

Everything is still possible for Saudi Arabia. They have it in their own hands against Mexico. The Kingdom team is one of the big surprises of this first week of the World Cup. And they want a lot more. The "Vision 2030" is intended to prepare the kingdom for the oil phase-out. Plus they've already secured the Asian Winter Games, which no one knew even existed. They are to be held near the yet to be built desert city of Neom.

Part of this vision, which was also present on flags distributed in the stadium, is the hosting of the football World Cup. Together with Egypt and Greece, they want to bring the tournament back to the region in eight years. It would be the logical continuation of FIFA's completely insane award policy around Gianni Infantino, friend of the autocrat and President, who put himself on the same level as Jesus. An incident after the final whistle shows what a World Cup in Saudi Arabia can mean. Two Saudis dressed in traditional robes insulted a TV crew with more than just words, but also threatening gestures. That came from Israel. The 2022 World Cup in Qatar is still not just a sporting one. 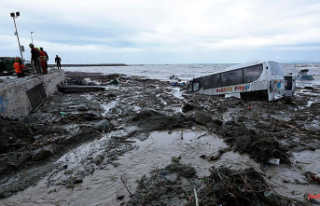 Several people are still missing: the woman dies in...