Leon Draisaitl has gone as far as he's ever come with the Edmonton Oilers in the NHL playoffs. 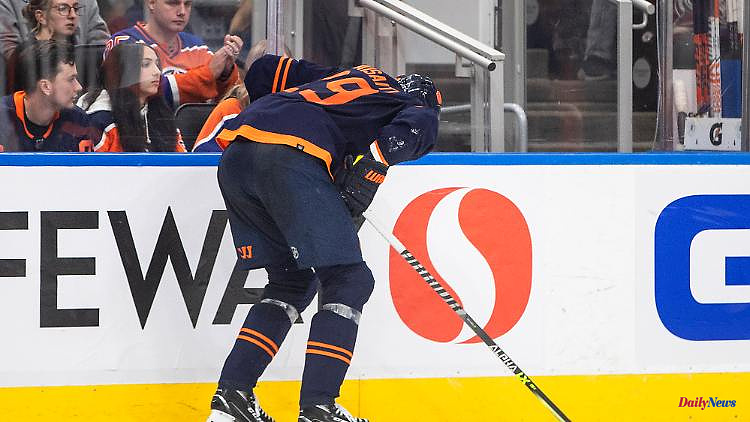 Leon Draisaitl has gone as far as he's ever come with the Edmonton Oilers in the NHL playoffs. But in the semifinals, Colorado was the end of the line. Despite this, Draisaitl delivered memorable performances. Because he only played on one leg.

Mount Everest is considered the king of mountains. Anyone who wants to climb it and get to the top, at 8,848 meters, must have an irrepressible will, endure torments and be able to surpass themselves. Many have tried. Have invested a lot, put away pain, gave everything - and still didn't make it.

In hockey, the Stanley Cup is something like Mount Everest. Even more. A few days ago, Leon Draisaitl even described it as "the most difficult sports trophy to win" in the world. North America's elite ice hockey league, the NHL, will play for about two months in the playoffs for this title. 16 teams have ambitions, dreams, hopes - but only one can celebrate in June.

It won't be the Edmonton Oilers with Leon Draisaitl this year. On Monday evening (local time) they lost the fourth game of the semi-final series against the Colorado Avalanche at home 5-6 after overtime. It was the fourth and decisive defeat. At the press conference afterwards, Draisaitl looked a bit like someone who had just been to the Himalayas. Full beard, worn out, slightly sweaty and frustrated. The only thing he didn't have was frostbite.

And the 26-year-old from Cologne may have felt like someone who had tried in vain to climb Mount Everest. again. However, this time he at least got as far as he had never done in the three previous attempts. He had reached the half, won two playoff rounds and eight games with Edmonton. After all, that was better than playing at the World Cup, which was always held at the same time. Because whoever competes there as an NHL professional either missed the playoffs or was eliminated early. Draisaitl knows that well enough. At some point, he said before the start of the playoffs, "such a World Cup would no longer be fun."

Above all, the win in just five games against the Calgary Flames was of great importance to fans and club. Edmonton and Calgary are the two largest cities in the Canadian province of Alberta. Just under three hours drive from each other. Their duels are jazzed up to the "Battle of Alberta". Anyone who has seen them live knows that the term "archrivals" must have come about because of this competition. For the first time since 1991, the Oilers and Flames met in the knockout stages - Edmonton won for the sixth time in seven meetings. After losing to Colorado, some Oilers supporters used it to point out that "the Battle of Alberta" was the real Stanley Cup for them.

Draisaitl already played against Calgary with an ankle injury he sustained in the first round against the Los Angeles Kings. Even those who didn't know inevitably realized that something was wrong with his right foot. The German ran roughly, couldn't push off hard and was far from his top speed. He played on one leg, if you will. But he still played outstandingly. In the five games, the striker had 17 points - no one in the history of the NHL playoffs had collected so many points in so few games in a series. And any questions about his ankle, Draisaitl just smiled away. "Everything OK."

That's how it is in the NHL playoffs. Everyone has minor or major ailments, nobody is one hundred percent healthy anymore. But no one would admit that publicly. Injuries are a type of occupational hazard. A car mechanic sometimes crushes his fingers when changing the transmission. And which carpenter has not had splinters in his hands?

And in these playoffs, it's like Mount Everest. The further you get, the harder it gets. "Everyone has the same goal, just think about ice hockey. You throw yourself into every shot - that's even more extreme than in the previous rounds," says Dennis Seidenberg in an interview with ntv.de. He has made it to 18 NHL semifinals in his career - more than any other German. And the defender was already at the top of Mount Everest, winning the Stanley Cup with the Boston Bruins in 2011.

Seidenberg was in the last four four times. "You're even more ambitious, you really want to make it to the final," he emphasizes. And that's why ambition makes the pain more bearable. Draisaitl has now also had this experience. In the second third on Monday he was checked fairly against the boards by Colorado's Darren Helm, but apparently his injured ankle was damaged again.

Draisaitl knelt briefly and then slowly skated to the bench, his face contorted in pain. He was writhing in agony, but was back on the ice a short time later. "I've known Leon for a long time. He plays with a lot of pride because he's injured. But his wits and determination to succeed are great to see," said Wayne Gretzky. The ice hockey legend, who won four Stanley Cups with Edmonton in the 1980s, is part of the expert crew of the TV station "TNT".

And this group of five agreed that Draisaitl should have given up long ago, taken off his skates and sat in the stands. But he didn't even think about it. That fourth game was a must win game, Edmonton had to win it to extend the streak. So he ran, shot and passed as best he could. His record: four templates and plenty of admiration on social media.

After the game, when journalists asked how he was able to play so hard despite the pain, Draisaitl looked as if he didn't understand the question. "There are many players who have painful injuries." Then he gestured briefly with his hands and added: "I'm not going to talk about myself here."

In the coming days we will find out how bad his injury was and how long Draisaitl has to pause. He was "of course proud of the group" that they made it this far, said Draisaitl. Oilers captain Connor McDavid, Edmonton's other jack of all trades, spoke of "a step in the right direction." Nevertheless, the facial expressions of the two showed that this clear defeat hurts.

This time Mount Everest was still too steep. Like the Nashville Predators and St. Louis Blues in previous rounds, the Oilers failed because of an overwhelming team. They were literally run over, and that can happen on the stony path to the summit. From an opponent who was as dangerous as his name: Avalanche - the avalanche from Colorado.

But just as numerous mountaineers will gather at the base camp of Mount Everest in mid-May next year to scale it, the Oilers also want to attack again in 2023. "We have to make sure we come back next season and understand what needs to be done to take the next step," Draisaitl urged. He wants to go higher. To where it gets even more uncomfortable. Where only the very best exist. The experiences from this spring could definitely be useful for this.

1 "Something has gone out inside": Lewandowski... 2 Ice Hockey Briancon: Two executives leave, and two... 3 Melenchon continues to make comments about the "police... 4 Support against inflation: The relief packages help... 5 Paris. Refusal To Comply: What do we know about police... 6 Almost 1200 employees affected: Orsay is closing 7 Thuringia: More and more electric and hybrid cars... 8 Book research in the rainforest: British reporter... 9 Baden-Württemberg: More women are habilitating in... 10 "Order boom is over": Industry receives... 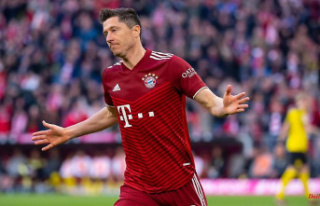 "Something has gone out inside": Lewandowski...