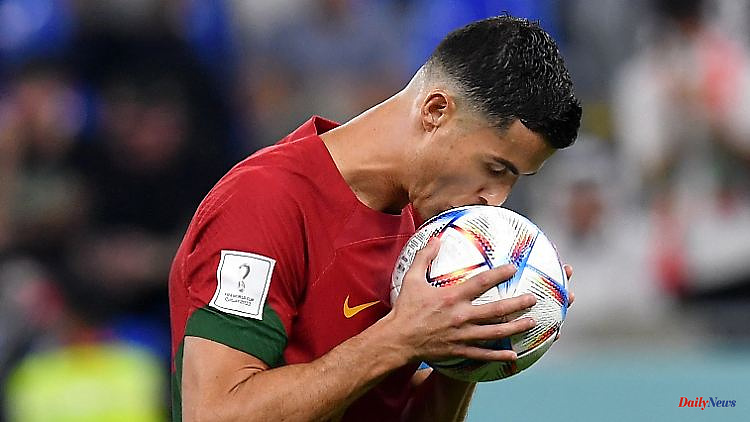 CR7 mania in Qatar: Cristiano Ronaldo wins with Portugal against Ghana, sets a world record - and cries. There is no stopping fans and journalists. A catastrophic goalkeeper mistake turns the wild CR7 evening almost completely upside down. A spectacle report.

The best moment of this game takes place just before the game. Cristiano Ronaldo struts into the players' tunnel with a broad back and a majestic look. He casually high-fives a few opponents. And then he suddenly stands in front of the ball girls and boys. Completely disbelieving, several children's eyes wide open at the barn door look up at their idol. The facial expressions on their faces reveal how incredibly shocked they are that HE is really standing in front of them. How little they want to accept that this is the reality. Fascinated, in love, idealized.

This is exactly how every person wishes to be adored by their partner. Alone, probably only children can look so impressed. But the scene illustrates: Ronaldo is God for many. Worldwide. Although some laugh at his theatrics, criticize him for his antics and claim that the 37-year-old is now too old and too bad for the top of the world. Millions - or maybe billions - of fans don't care. The worship knows no age, no gender, no origin, no social class, no religion, no skin color, no level of education.

What FIFA always promotes with their football, Ronaldo really does it. He connects this world. German fans, media and observers are critical of the man with the number 7 on his back. But the world still doesn't have a bigger football superstar, even if others are now scoring more goals, winning more titles and earning more. Portugal's wild 3-2 victory over Ghana - and above all the wild spectacle surrounding the game - clearly shows this.

But first, eyes play a role again. It's the superstar's this time. Ronaldo is the first to step onto the lawn. A mischievous grin crosses his face. He lives for these moments. He sacrifices so much of his life for them, in order to still belong to (almost) greats even in old age as a football player. When the first notes of the Portuguese national anthem sound, tears well up in the attacker's eyes. He knows that this will probably be his last World Cup tournament, maybe his last big tournament at all.

Ronaldo's first touch of the ball follows - cheers break out immediately. It's a loss of the ball and a foul by the megastar. But a few minutes later, a deep pass cuts through a gap in Ghana's deep 5-3-2 and Ronaldo is free in front of the keeper, but he can only touch the ball with his toes, crashing into the keeper. There's repulsion.

Ronaldo is on fire - and Ronaldo is still a fire hazard. He often gesticulates frantically in the direction of his teammates, shows his running paths and reacts with frustration like a D youth footballer when the ball he was hoping for doesn't come. In the case of a short corner, the striker instinctively smells the roast, sneaks into the free space at the second post and climbs three floors higher than all defenders in his inimitable way with the subsequent cross. But he puts the header next to the goal.

Then the game flattens out. The Arabic commentator down the line doesn't care at all. He comments as only a Ronaldo madman can comment and the world-famous name, recognizable in every language, keeps popping up. You walk past camera teams outside the stadium and you immediately know what, or rather who, is the topic here. Later in the catacombs, some media people go nuts when Ronaldo arrives, but more on that later in the World Cup diary.

Even if the World Cup ratings are miserable in Germany: In Doha it seems that the earth stops rotating for these 90 minutes. Or as if it were really just about this exceptional footballer. Every second (and this is not an exaggeration for once), really every second, who ties with Portugal wears a shirt with the number 7 on the back.

In the 31st minute the ball suddenly bounced in the net - Ronaldo, who else? - and the stadium freaks out for the first time. But the referee blows his whistle because the Portuguese had pushed his opponent away in a duel. Shortly thereafter, his jersey is plucked and he turns away, annoyed, à la lèse-majesté. Once he receives the ball a good 30 meters from goal with several opponents in the way, but a murmur goes through the crowd immediately, hoping that the striker without a contract will pull the ball straight away. It will only be a short return pass.

It is a curious, almost absurd football game. The whole circle just seems to be waiting for Ronaldo to score at some point. The Portuguese obviously loves to be the center of attention, but one wonders how many times in his career such immense attention has struck him as uncanny. Will he be happy, relieved, or disappointed if he gets a little less attention soon after retiring? The wet eyes of the national anthem reveal that it will definitely hurt him, after all, the 2016 European champion is first and foremost a fanatical athlete and record hunter.

In the second half, the Portuguese fans want to force the win: the curve, which has been rather quiet to date, stands up and starts chanting Ronaldo. The football god seems to answer them immediately: After a fine back-heel trick by the former "child prodigy" Joao Felix, Ronaldo falls in a sprint duel for the ball, with only minimal contact. Referee Ismail Elfath points straight to the point and doesn't even look at the scene again. The VAR does not intervene either. Ghana's coach Otto Addo sees a clear "wrong decision" and is beside himself after the game: "I don't know what they did, whether the video referee slept. It's crazy that you don't even look at this scene."

It doesn't matter, the football god wants the world to stand still completely. Maybe one last time. Then the stadium finally gets the total fan blast. The boss doesn't let the penalty be taken away and doesn't even really hit the ball into the left corner, but who cares. 1:0. Off the curve. Siiiuuuuuu. His distinctive jubilant cry. Almost everyone has pulled out a mobile phone, and the whole world is siiiiuuuut in a breathtaking noise. Even Ronaldo has to laugh a little. Then he salutes to heaven. A hungover game of the (former) earthly soccer god with the one up there somewhere?

In any case, the 37-year-old's goal (his eighth World Cup goal) makes him the first player ever to score in five World Cups. Not Pelé, not Klose, not the Brazilian Ronaldo. Only the Portuguese can now accuse this statistic. Not bad for an unemployed man, arguably the highest paid of all time. Because after the termination of his contract with Manchester United he is looking for a new club. "It was a wonderful moment," he said after the game at the press conference about his goal. "My fifth World Cup, we won. That was very important. The world record is something that makes me very proud."

A wild game then develops. Ghana equalized just a few minutes after the record. But again just moments later, Felix pushes in coldly to make it 2-1. In the catacombs after the game, the scorer said it was "a dream to play with Ronaldo". He and several other players "adored him as a kid".

Again, only a few seconds later, Portugal even followed up. This time the adored Ronaldo is involved with a so-called hockey assist, the pass before the submission. There's real fire in here now. Ronaldo breaks through in the next situation, showing that even at the age of 37 he can still shake off an opponent and win a sprint duel. Alone, he sprints towards the goal with the ball. The stadium is ready for the next siiiuuu explosion - but the Portuguese's lob only finds the goalkeeper's arms and then the offside is called anyway. Regardless, the Ronaldo fans are happy. They get the show they were hoping for.

As soon as the superstar is replaced, Ghana make the connection. Ronaldo angrily gestures on the bench. Again there is a brisk nine minutes of stoppage time. In the very last scene, the Portugal goalkeeper put the ball in front of his feet, forgetting Ghana's Inaki Williams behind him. This actually grabs the ball and could slide into the free goal - but in the decisive turn he slips.

Ronaldo stands completely aghast in front of the substitute bench and opens his eyes wide. Then the final whistle sounds and he can laugh again. Outside the stadium, however, it's far from over. Hours after the end of the game, Portuguese and even Ghanaian fans celebrate their football god CR7. Every three seconds someone starts a siiiuuuuu and the rest join in. Cristiano chants follow in the crowded subway station.

A wild evening in Doha shows: Ronaldo has long been more than a soccer star. He's a worldwide phenomenon. An icon. What does he stand for? For the indispensable success? For power, goals and show? All not so important. The main thing Siiiiuuuuuuu. 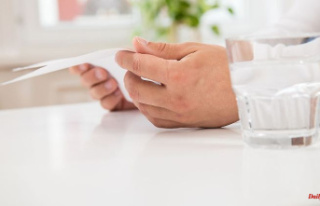 Warning at work: is there a statute of limitations...