The Formula 1 race in Great Britain was interrupted for almost an hour after a serious accident at the start. 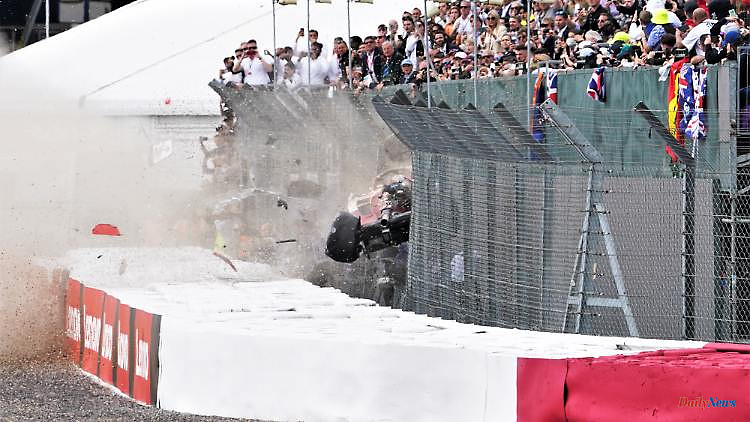 The Formula 1 race in Great Britain was interrupted for almost an hour after a serious accident at the start. Luckily no one is seriously injured. After the restart, Ferrari gambled away at Leclerc, Verstappen also had problems - and Mick Schumacher scored his first points in all the chaos.

In the Formula 1 madness of Silverstone, Ferrari driver Carlos Sainz crowned his 150th Grand Prix with the first win of his career. Unfazed by a horrific crash at the start, the Spaniard triumphed in the most spectacular race in years, beating the Mexican Sergio Perez in the Red Bull. Third place went to Mercedes superstar Lewis Hamilton, who for a while could even hope for his ninth victory in his home country.

World Championship leader Max Verstappen suffered a setback with a damaged car and only finished seventh. However, the biggest news of the day for Formula 1 was that China's Guanyu Zhou and Thailand's Alexander Albon escaped a frightening early-race accident unscathed.

Haas driver Mick Schumacher, who had started the day penultimate and finished eighth, managed a terrific race and captured the first four World Championship points of his career. He almost even got past Verstappen in the last few meters. Aston Martin driver Sebastian Vettel rewarded himself with two points on his 35th birthday after fighting his way from 18th on the grid to ninth. In the overall World Cup standings, Verstappen is still clearly ahead with 181 points. Red Bull teammate Perez is second, 34 points behind. Third is Ferrari driver Charles Leclerc, who in fourth at Silverstone was only able to catch up six points on Verstappen and is now 43 points behind.

The 142,000 spectators in the stands saw a highly dramatic spectacle. Formula 1 held its breath seconds after the start. Zhou shot his Alfa Romeo headlong off the track, flew over the tire barriers and into the safety fence. Miraculously, he survived the frightening accident without serious injuries. The "Halo" cockpit protection, a titanium roll bar, which was still controversial a few years ago, probably prevented worse things from happening.

The scene was triggered by an attempt by Pierre Gasly in the Alpha Tauri. The Frenchman touched George Russell's Mercedes, which in turn collided with Zhou's car. Behind it, the pilots tried to dodge. In doing so, Vettel bumped into Albon's Williams, who spun and rumbled into several cars. The Williams stranded on the side of the track, badly damaged.

Like Zhou, Albon was taken to the track hospital. "There were no serious injuries," said the world association FIA. Zhou was able to leave the medical center during the race. Albon, meanwhile, was flown by helicopter to nearby Coventry Hospital for further "precautionary checks". Because of the accidents, the race was stopped immediately. Because of this, an action by several demonstrators who climbed over the fences and stormed onto the track almost went under. The police had previously had evidence of such protests and warned of the danger to life for those involved. All activists were safely taken off the track and there were several arrests, Nottingham County Police said.

After almost an hour, the race could start again. If Verstappen overtook Sainz at the first start, the Spaniard aggressively defended his lead this time. When fighting for positions, Verstappen and Leclerc pushed each other, who then touched the Red Bull from Perez. The Mexican soon had to get a new front wing.

A thrilling chase with ever new twists developed. Verstappen took the lead after Sainz made a driving mistake. Shortly thereafter, however, the world champion complained about problems and came into the pits for new tyres. But things didn't get any better for the 24-year-old, who had previously won six races of the season. "The car is 100 percent broken," said Verstappen and came back to the garage. Red Bull informed him that his chassis was damaged. The chance of victory was gone.

Halfway through the race, Hamilton took the lead for the first time because both Ferraris had fresh tires fitted. Leclerc was allowed to pass his slower teammate Sainz in pursuit of the Mercedes star. In lap 34 Hamilton came to the tire service, now the two Ferraris were in front again.

But the spectacle wasn't over yet. Esteban Ocon had to park his defective Alpine. The safety car came to salvage the car and slowed the field down. Leclerc drove on, Sainz and Hamilton got fresh rubber rollers again. That paid off especially for Sainz, who was able to overtake Leclerc after the race was approved. Hamilton still had to let Perez pass, but still claimed the place on the podium. 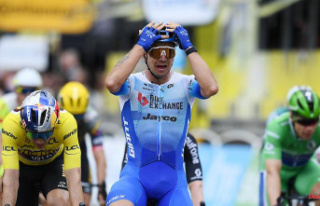