Sensational haul of medals: Wellbrock sets the World Championship record for the "Albatross".

Two races, two medals: The German swimmers are happy about a successful day at the World Cup lake even without gold. 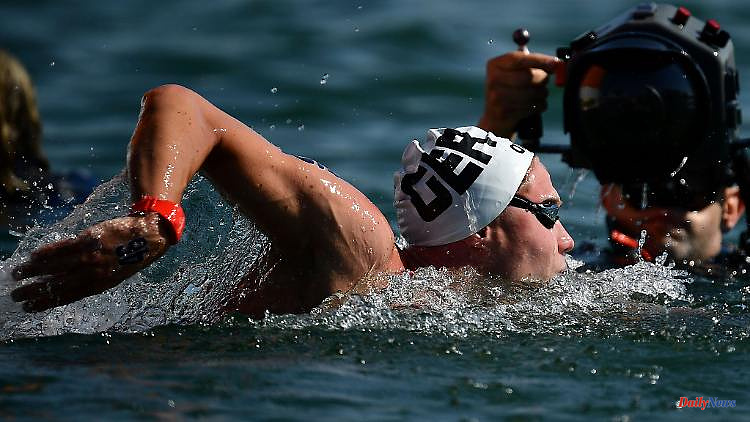 Two races, two medals: The German swimmers are happy about a successful day at the World Cup lake even without gold. After Leonie Beck's strong early morning race, the phenomenal Florian Wellbrock takes bronze. Now he is looking forward to seeing you again.

At the thought of swimming legend Michael Groß setting a world championship record, Florian Wellbrock smiled and was visibly satisfied with his world championships, even without the really big happy ending. "It's a huge honor, of course, no question about it," said the exceptional athlete after completing his World Championships with bronze over ten kilometers in open water. Around four hours before Wellbrock's race, Leonie Beck celebrated silver over the same distance and initiated the successful German swimming day.

In the approximately 28 degree warm water and outside temperatures of 36 degrees, Wellbrock had to admit defeat to the Italian winner Gregorio Paltrinieri in the blazing sun, as he had done in the 1500 meter freestyle in the pool. Second on Wednesday was his compatriot Domenico Acerenza. "It's the second title that I haven't been able to defend, but I'm still very happy with the bronze medal," said Wellbrock, whose initial feelings were "quite ambivalent". After a few minutes, however, he realized: "I can go to the award ceremony with my head held high and be happy about bronze." On the dais, Wellbrock smiled contentedly.

What satisfied the 24-year-old was not primarily third place over the ten kilometers, where he is an Olympic champion. Above all, it was his overall performance. "Five starts, five medals: someone should do that again," he said proudly. Groß had previously been the only German "Albatross" to win five medals at a World Championships. 40 years ago he won two golds, one silver and two bronzes at the title fights in Guayaquil, Ecuador - all in the pool. Wellbrock's Budapest record is now: silver and bronze in the hall, two gold and one bronze in the open water. Kristin Otto holds the record for German female swimmers: She even won six medals for the GDR at the 1986 World Championships in Madrid.

"That's what you work for all year round: to be at the top of the top event afterwards. And if you can do that five times over five routes, that's something very special," said Wellbrock. He coped impressively with his tight program of five long-distance decisions in nine days. "He's a world-class athlete," his trainer Bernd Berkhahn ennobled him. The exceptional athlete did not show a real weakness at this World Championships, as he did in the past in the 800-meter freestyle. On his worry distance he finished second in the Duna Arena. He wasn't able to defend his title over 1500 meters afterwards, but wasn't completely dissatisfied with bronze either. And the real highlights were still to come.

Wellbrock secured gold in the open water relay as the outstanding final swimmer and also impressively snatched the title in the five-kilometer race. In the last World Championship appearance he led for a long time, but in the end he had to pay tribute to the many races and a bit of the heat. "Perhaps the temperature was the biggest opponent for everyone today," said the Magdeburger. Even without a third title in Lupa Lake, Wellbrock has shown that if he stays true to outdoor sports, he can shape open water swimming in the years to come.

Beck also has what it takes to win major races on lakes and seas. After moving from the pool to the open water, the 25-year-old has long established herself there and won her first world championship medal in the Olympic ten kilometers in Hungary. The Würzburg native, who lives and trains in Italy, was very happy afterwards. Exhausted but always smiling, she talked about the success on the sandy beach of the lake in bright sunshine. At the award ceremony in front of shiny water, she gave the precious metal a kiss.

"A medal at a world championship is really great. In the end you also need a little bit of luck. But second place in this field is really, really good," said Beck. In a furious three-way battle for the podium places, she had to admit defeat to Sharon van Rouwendaal from the Netherlands in the photo finish, but came in just ahead of Ana Marcela Cunha from Brazil.

After a little rest, Beck wants to give everything again this Thursday. However, not in the water, but as support and with catering for teammate Lea Boy in the 25-kilometer race. "Tomorrow I'll support with everything that's still in my body," said Beck. Wellbrock is already free, flies home and longs for a reunion with his wife Sarah and his dog Kojak at the lake. "I'm very happy when I'm home tomorrow, can hug Sarah again and cuddle my dog ​​again," he said. "Then we'll all be together again." 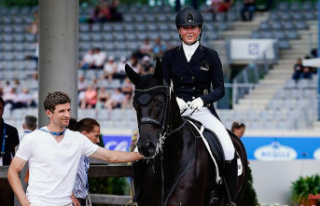 Thomas suffers at the CHIO: Lisa Müller messes up...