Show for a modest world star: FC Bayern unpacks all the superlatives for Mané

Really big station for the world star: FC Bayern is delighted that Sadio Mané is moving to Munich. 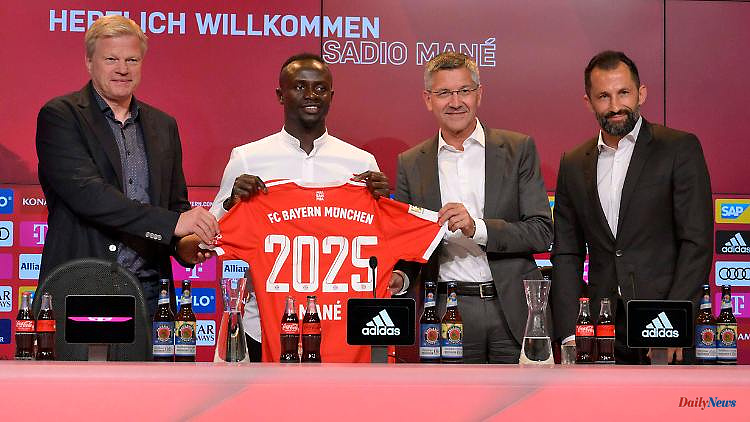 Really big station for the world star: FC Bayern is delighted that Sadio Mané is moving to Munich. The attention is just as great, the press conference to present the Senegalese lasts an hour. Mané is modest, but the club is showing off.

"World star" Sadio Mané presented himself as a modest team player with his shy, quiet "Servus", FC Bayern cheered all the louder about his spectacular transfer coup. Oliver Kahn, Hasan Salihamidžić and Herbert Hainer outdid each other with superlatives during the hour-long presentation of the king's transfer in the Allianz Arena and couldn't stop grinning. Trainer Julian Nagelsmann watched the spectacle enthusiastically from the second row. With Mané, CEO Kahn is certain that "all major goals are possible" - including the pot and even the whereabouts of world footballer Robert Lewandowski, who is willing to emigrate.

"They see beaming faces," enthused President Hainer, "we are glad and happy to have brought such a world footballer, an absolute world star, to Bayern Munich." The move of the up to 41 million euro striker from Liverpool FC for three years to the Isar "shows the radiance that Bayern Munich has" and underlines the thirst for the title "clearly", he added, patting Mané on the shoulder appreciatively.

The 30-year-old smiled timidly. In general, Mané was very reserved in front of more than a dozen cameras, as many photographers and around 70 reporters and emphasized several times that he wanted to "help the team". For the record champions he was "on fire" according to the motto "Bavaria or nothing!" he didn't even listen to other offers.

With this determination, Mané should inspire his new colleagues. "We need fresh blood, after such a long run of success, a certain comfort can spread," said Kahn. He knows what such a star "can trigger in a team". And so Mané should also become a joker in contract poker with Lewandowski or Serge Gnabry.

"The players take a very close look: who does the club take, which transfers are possible, do I have the opportunity to win the biggest thing in club football, the Champions League," explained Kahn. The fact that Mané was able to get Mané in the prime of his career "of course radiates internally to the team". And as for "Lewy": "We'll be happy if he shows up on the first day of training." Basta, the second.

Salihamidžić reported enthusiastically from the first meeting at Mané's home, where he received the FCB delegation in shorts and peeling a mango: "He was passionate about this project from the first second." He "didn't have to think twice and agreed immediately," said Mané. The conversation with Nagelsmann "fascinated him. Coming here - I just love it." In Munich, too, he was "already in love" after just two days in the city.

The Bavarians returned this affection with flowery words. This "unique footballer" lured the fans into the stadium, enthused Hainer. For Kahn there are "very few players in the world" like the Senegalese. Sports director Salihamidžić called him a "mentality monster" and "an international top star who has left his mark on world football". For the long-controversial head of sports, the coup is a liberation. "This transfer increases the attractiveness of the Bundesliga and at the same time sends an important signal abroad," he said happily. "World-class players want to play in the Bundesliga!"

Mané was enthusiastically received by his new teammates. Captain Manuel Neuer spoke of a "perfect match" and shouted at Mané via Instagram: "Servus, Sadio. Pack ma's!" Thomas Müller said: "He's a top player who will take us forward."

Only Jürgen Klopp wore mourning. "I'll miss you," said the Liverpool coach after the "legend" and Reds "icon". Klopp is certain: "His star will continue to rise." Now in Munich.

1 Miscellaneous/politics. Under investigation for rape... 2 Coach Kramer "the heart rises": Schalke... 3 Equal rights for many associations: DFB leaves the... 4 LGBTIQ in Qatar in fear: "It feels like I am... 5 Qatar's LGBTIQ in fear: 'Like I'm dying... 6 His coach defends Odessa: the Ukrainian swimming hero... 7 "Insane transfer" is fixed: FC Bayern is... 8 Transfer coup for the Red Devils: Kaiserslautern signs... 9 Lukaku becomes a record player: Tuchel is 113 million... 10 Trouble after being kicked out: Mazepin wants to take... 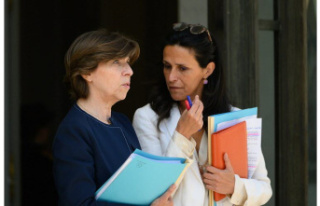 Miscellaneous/politics. Under investigation for rape...