Soccer god, what are you doing?: Merciless EM curse catches up with Popp again

It's her tournament, it's supposed to be her final: Before the European Championship final, everything is focused on Alexandra Popp. 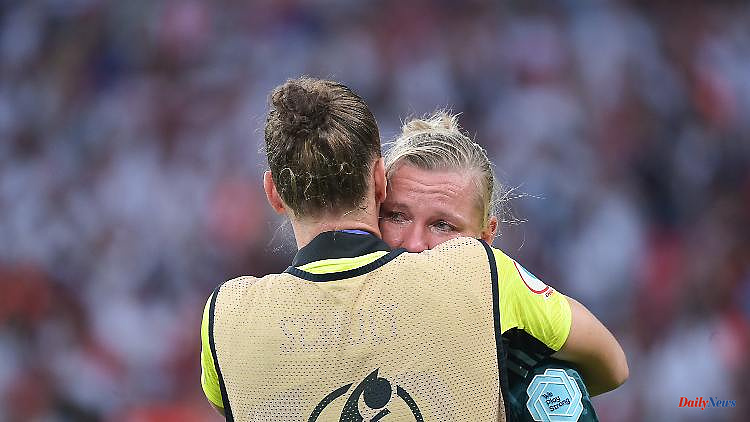 It's her tournament, it's supposed to be her final: Before the European Championship final, everything is focused on Alexandra Popp. The German captain, who is playing her first European championship at the age of 31, who is finally not injured - and is showing off so well. Until minutes before kick-off everything changes.

There are people who don't believe in God, don't trust Allah or Buddha, but only worship one thing: the god of football. These people must have had their faith tested early on Sunday evening. Everything was prepared for a rousing football festival in the final of the European Football Championship between England and Germany. It was focused on the direct duel between the two top scorers of the tournament, Beth Mead and Germany's captain Alexandra Popp. But then that. In the middle of the opening show, a short message came from the DFB spokeswoman on the journalists' cell phones: "Popp has to pass because of muscular problems, but Schüller."

It was nothing with the duel for the top scorer trophy, once again the football god did not mean well with the 31-year-old. Instead of leading her team into the stadium, she stood on the sidelines for the anthem. Instead of greeting the referees, exchanging flags and helping to choose sides, she had to sit on the bench. A drama that was indicated while warming up: your conversation with national coach Martina Voss-Tecklenburg, in which both looked very serious and depressed, your long hug with Sophia Kleinherne, also your taped thigh.

The Wolfsburg woman already knows that she is thrown back once again and should doubt the existence of a higher power. She made her European Championship debut just four weeks ago after coming on as a substitute in the opening game against Denmark (4-0), aged 31, after missing the 2013 and 2017 tournaments through injury. Popp had already completed 114 games in the DFB jersey and had become Olympic champion, was at the World Cups in 2011, 2015 and 2019, but the European Championships were cursed.

He finally seemed transfixed. Although she suffered a cartilage tear in her knee last year, experienced several setbacks in rehabilitation and had to undergo another operation, Popp did not give up. The thought that she would miss another European Championship if the coronavirus pandemic hadn't caused the tournament to be postponed by a year, it was on her mind. She wanted to benefit from the delay, she really wanted to be part of it. In April she made her comeback with the Wolfsburg women, she had not played for more than ten months, not even in the national team for 17 months. She came on as a substitute against Portugal, Svenja Huth slipped the captain's armband over her - and in the end Popp cried. "You rarely see me cry," she told NDR, "but at that moment the tears actually fell." She also shed tears after her first European Championship goal, the 4-0 win against Denmark. Proof of how much emotion is in this tournament.

Not even a corona infection in the preparatory training camp in Herzogenaurach could stop her. She played - and how. After four goals in four games, the captain had set a new European Championship record, in the semifinals against France she scored twice, six goals in five games. The satirical portal "Der Postillon" has already joked that men's national coach Hansi Flick would nominate her for the World Cup as "Alexander Papp", she reacted in a good mood with a mustache glued on and a baseball cap turned upside down at a press conference. She was lauded by her teammates and everyone hailed her for the tournament she left her mark on. "Things couldn't have gone better for me," Popp summed up. With a big but: "Despite all this, I got a headache again."

During the final training session on Saturday, the muscular problems in the front thighs occurred, "actually with the last shot," said Popp. "I didn't have such an optimal feeling." A test run in the morning, warming up on the lawn of Wembley Stadium - then the certainty: Impossible to use. "I couldn't play a long-distance pass, I couldn't shoot at goal properly, which was somehow more solid than a back pass, that just wouldn't have made any sense," explained the Wolfsburg native. "There have to be eleven fit players on the pitch to win if possible." A tough decision, also for national coach Martina Voss-Tecklenburg: "For that, she deserves the utmost respect. In a final, after a tournament like this, after a story like that, saying 'I don't play' is what distinguishes great personalities."

Instead of Popp, Lea Schüller returned to the starting XI, tested positive for Corona even after the opening game and was isolated for almost a week. Another story of this tournament, in which the offensive woman Klara Bühl, who was seeded and played brilliantly up to the quarter-finals, fell victim to the virus and at least tested the final, but could only watch it from the stands. Now Schüller, the top scorer in the Bundesliga, who received the "Kicker" prize for soccer player of the year just before noon, is a completely different type of player than Popp. And above all: She is not Alexandra Popp. The English women probably had the most respect for her, she had also been identified by the press as the worst opponent who could stand between the home team and the long-awaited first title. "It would probably have triggered something if Poppi had played," said the national coach. "But it just didn't work. We always want to win or lose as a team."

So while the German journalists had a sad message to deliver just seconds before the teams arrived for the national anthems, the English women must have felt a sense of relief. A huge psychological advantage when the opposing captain is absent. Popp still stretched during the game, and there was always speculation as to whether she might still be able to come on as a substitute. But no, the fairy tale she succeeded in at this tournament was not supposed to have a happy ending. Not for you personally, not for your team. Trophy in hand, England danced across the pitch past 87,192 spectators who had lent their nod to the happy ending for the hosts.

Instead of Popp, Mead becomes the tournament's top scorer. Although she scored as many as the German with six goals, she also contributed five assists. Her Popp can no longer dispute the title of player of the tournament.

But the German frontwoman is already looking ahead. "We can be very, very proud of what we played in a tournament. We showed everyone what a great team we are. It makes me proud to have been here, it makes me want more." Yes, that is a declaration of war. In a year the world championships will take place in Australia and New Zealand. Popp has not yet won a world title either. The football god could have an understanding. 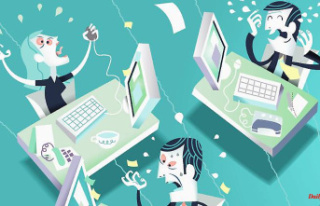 Concentration, please!: How to find the right focus...