The younger one decides the EM final, the older one becomes MVP - and they also have German roots. 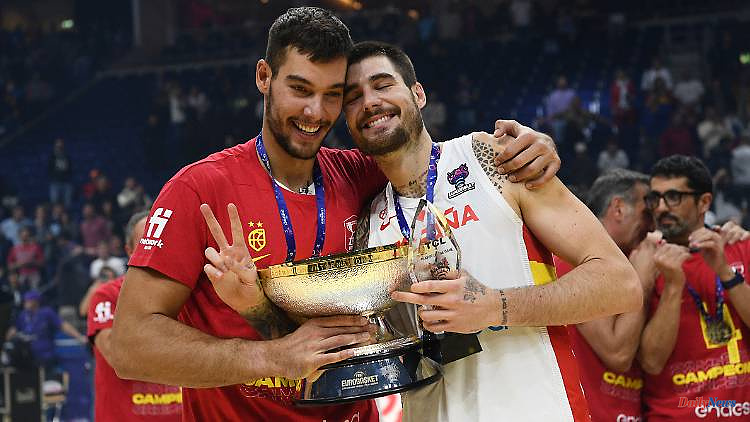 The younger one decides the EM final, the older one becomes MVP - and they also have German roots. Willy and Juancho Hernangomez surprisingly lead their team to the title and are preparing to follow in the footsteps of the legendary Gasol brothers at least a little with the Spaniards.

Willy Hernangomez was bowing to his brother Juancho when the attack began. "Campeones de Europa," chanted the Spanish players, blasting the press conference and giving the tournament's MVP a proper shower. Of course, successful coach Sergio Scariolo was not spared by the newly crowned European basketball champions in Berlin. "It's the dark side of a young team," said the Italian, thinking back to the good old days: "I can't imagine Pau Gasol splashing around with water." Then he shared a large towel with Hernangomez and at least superficially removed the traces.

"We were in eighth place in the power rankings and managed to overtake all teams. Especially the last one, full of NBA and Euroleague players," said the coach after the 88:76 final victory against France in Berlin. "I'm very happy because we played great basketball." Silver 2007, gold 2009, gold 2011, bronze 2013, gold 2015, bronze 2017 and now gold again: The Spaniards have now won precious metal in seven European Championship tournaments in a row. For the next twelve months, they will combine the two titles of world and European champions. "This title has a special flavor, different from the others," said Scariolo.

In the tournament peppered with NBA superstars with Luka Doncic, Nikola Jokic and Giannis Antetokounmpo, the Spaniards were initially considered more of an outsider. After the 2021 Olympics, Pau and Marc Gasol said goodbye, and the build-up players Ricky Rubio and Sergio Llull were not there. But Willy and Juancho Hernangomez have now followed in the footsteps of this great generation, and the parallels with the Gasols are obvious because of their sporting class. While Willy grabbed the honors as EuroBasket MVP, Juancho was the decisive man against France.

Star actor Adam Sandler sent very special congratulations via Twitter. "Bo Cruz! You did it. Love you Juancho. And Willie! Congratulations to the whole Spanish team. Sandler, 56, and Juancho Hernangomez co-directed the movie 'Hustle', which was released on Netflix earlier this year. Pro Hernangomez plays the basketball player Bo Cruz in the film, a talent from the street who succeeds in making the leap into the NBA. Otherwise, however, without parallel to the "real" Spaniard, who comes from a real basketball family. In the first days after its release, "Hustle According to Netflix, the most-watched film in the streaming service. Dirk Nowitzki and Moritz Wagner also appear with small roles, as do numerous current and former NBA professionals such as Shaquille O'Neal, Julius Erving - and Spain's coach Scariolo.

The Hernangomez brothers come from Madrid, the NBA professionals have a famous mother. Margarita Geuer, born in Seville to German parents, became European basketball champion herself in 1993. In her honor, Willy's jersey at the EuroBasket read "W. Geuer". The older of the Hernangomez brothers, signed to the New Orleans Pelicans, dominated the European Championships in the zone, especially on the opposing board. The center scored double digits in every game and shone especially in the quarter-finals against the surprisingly strong Finland with 27 points. In the semifinals he presented Germany with problems.

But in the final it was Juancho, like his brother 2019 world champion, who took over the game. 27 points, seven successful threes, the "little one" (2.05 meters) from the Toronto Raptors showed a show. "I'm proud of how my brother grew during the tournament. Today he was there for us," said Willy Hernangomez. However, the whole team improved during the two and a half weeks. "We deserved this gold medal. The confidence in the dressing room was special." Likewise the team spirit.

1 Emojis exchanged: activists embarrass Wagner mercenaries... 2 Heating with wood waste: is it worth switching to... 3 Bavaria: State parliament CSU for tougher action against... 4 The day of the war at a glance: Rocket hits near nuclear... 5 Grief and anger in Tehran: Mahsa Amini's death... 6 Breaks the EU alliance against Putin?: When Italy... 7 Complex task: Kristersson is to form the Swedish government 8 Queen Elizabeth II buried: moving farewell to a monarch... 9 2.5 million per person: There are probably around... 10 North Rhine-Westphalia: 1-0 against Saarbrücken:... 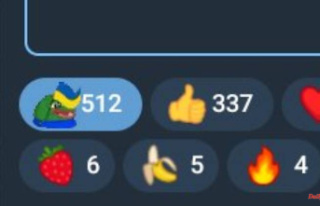