Speedster alert at the international match: "Ernie" Wittig, the forefather of the naked speedster

At the international match of the German national team on Tuesday, three of them were suddenly on the field: Flitzer! And all three kept security on their toes. 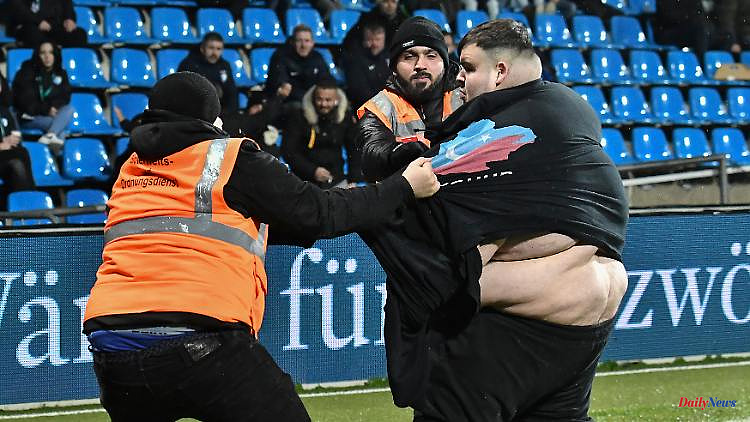 At the international match of the German national team on Tuesday, three of them were suddenly on the field: Flitzer! And all three kept security on their toes. Basically, the addiction to attention is now rather annoying.

"We had a fun weekend and drank a few beers. I just had the feeling that I have to do it now. It was out of euphoria." Back in May 2016, a guy suddenly ran onto the lawn of Bochum's Ruhr Stadium, who seemed at peace with himself and the world. Obviously, the Cologne bar owner Andi was simply completely in the here and now, as he drove the crowd to waves again and again, shirtless and with outstretched arms, and ran ecstatically and grinning across the square. The spectacle ended voluntarily and with a high-five in the arms of a beefy steward, who were almost amicably spread out.

In an involuntary way, bar owner Andreas from Cologne reminded of the forefather of German runabouts, Ernst-Wilhelm "Ernie" Wittig, who died tragically in an accident two years ago. made his rounds through the stadiums of the republic. But while Andi in Bochum only stormed the lawn out of the beautiful moment and the euphoria of the moment, it was different with "Ernie" right from the start. He had a clear motive. He wanted to show himself and his imposing figure: "My body is a work of art that would be marred by clothing."

A certain Fat Comedy also wanted attention when, in December 2019 - once again at a game in Bochum's Ruhrstadion - he steered his massive body onto the pitch in an extremely clumsy manner. Like two and a half years later, when he punched Oliver Pocher in the face during a boxing match, he used physical violence that evening as well. First he pushed a security employee out of the way, then he kicked one of the folders who wanted to get him off the lawn again. Any form of physical violence on the part of the speedsters is usually rather unusual - except for the following story, which has a different, special highlight. It's about a real football fanatic.

Richard Dunn was just fed up that day. And so the Everton fan suddenly ran, leapt over the barrier and attacked Middlesbrough FC's French defender Franck Queudrue with a neat sliding tackle from the side. The Boros player was unharmed, stopped the ball, paused and looked down at the attacker in irritation. At that moment a steward came onto the pitch, grabbed Dunn's hand and brought the Everton supporter back to his parents - because Richard Dunn was only nine years old. When later asked why he did it, Dunn replied, "The team just played horribly. I wanted to show them how to do a decent tackle!"

Incidentally, for many years a certain Mark Roberts was known as the "king of speedsters". His passion for free body skating was sparked in 1993 at a rugby match in Hong Kong. First he saw a naked woman running across the field and the next day Roberts ran across the field himself. Eventually, however, it so happened that the king lived in a golden cage. Before important international events, the Englishman regularly had to hand in his passport to the local police station. The organizers were worried that Roberts could strike again. Incidentally, Roberts is said to have received a travel ban from the British government for the 2006 World Cup in Germany at the request of FIFA.

However, the Brit had worked hard to earn his reputation as the "king of speedsters" - because not everything went smoothly for him at the beginning either. So he had overlooked a small detail in one of his first nude appearances. At the time, the Liverpool native was working in a pub near Anfield Road. One day, while the game was in progress, he asked his boss for a cigarette break. Since it was just before half-time and his customers liked to use the 15 minutes to urinate, he sent him out the door - but Roberts didn't stay there. Because he immediately ran into the stadium, ran across the field naked, was taken away and, after paying a small deposit, was back in the pub twenty minutes later. But his boss just shook his head: "Mark, look up in the corner!" That's where the TV was. In contrast to his guests, the pub owner was not at all impressed by Roberts' action: "We saw you, you're fired!"

A player from Middlesbrough FC also saw one of the first female speedsters in football - a prominent one at that. For once, in the winter of 1999, aging world soccer star Paul Gascoigne was not confronted with a dangling privates. A Santa Claus appeared to him in the middle of the square, flashing female curves just a few centimeters away from him. The runabout and the star alike beamed in competition and the security service was suddenly plagued by a collective calf cramp.

The Italian national team had a similar experience during their preparations for the EM 2008. Lisa Dalla Via and Marianne Puglia ran onto the pitch, stripped naked except for a few bits of bikini and kissed each other. Gennaro Gattuso, Marco Materazzi, Mauro Camoranesi, Luca Toni and Co. smiled and stared after the jumping women.

On Tuesday in Mönchengladbach, however, the three speedsters were lucky that there was already a clear result at the time of their action and, given the relaxed character of the game, most people accepted the late spectacle on the pitch as a treat for the way home. But one thing should be clear to all future speedsters: In the meantime, the increasing addiction to attention is only annoying for many viewers. So no one should go too far - regardless of whether they are old or young, male or female and, above all, whether they are naked or dressed.

1 Blown against facade: kitesurfer dies in storm in... 2 Murders in the Amazon: representation of Brazil's... 3 Corona break ended: great sigh of relief on the fjord... 4 Rival slain?: Police are looking for a fugitive violent... 5 Fire out of control: forest fire in Brandenburg: district... 6 Trip with Jill: US President Biden falls off his bike 7 First hot weekend of the year: Heat in Germany - Sahara... 8 Mysterious action on the Autobahn: Parcel messengers... 9 Anti-Semitism at Documenta: Steinmeier draws clear... 10 It's only raining in Greece: the Europeans practice... 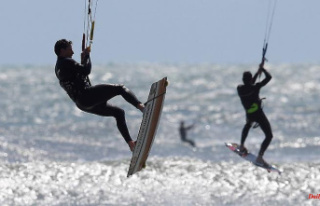 Blown against facade: kitesurfer dies in storm in...