The German national football team controls the Nations League duel with England over long distances and also takes the lead. 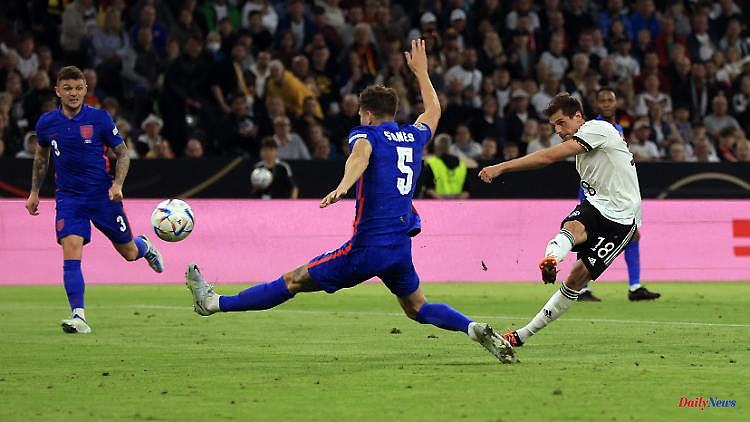 The German national football team controls the Nations League duel with England over long distances and also takes the lead. Shortly before the final whistle, however, the video assistant points out a foul - and the European runner-up equalizes with a penalty. Both teams remain without a win on the second matchday.

Under Hansi Flick, the German national team is still waiting for its first success against a major football power. Almost six months before the World Cup in Qatar, the selection of the German Football Association (DFB) in the Nations League against European runners-up England did not go beyond a 1-1 (0-0) despite a strong performance. Three days after the 1-1 draw in Italy, the attacking power was again lacking. Only Gladbacher Jonas Hofmann scored in front of 66,289 spectators in Munich after a clever pass from Joshua Kimmich (51st), and so Harry Kane was able to use a late penalty kick to equalize (88th) - it was the captain's 50th international goal. Nico Schlotterbeck had previously brought down Kane, the video evidence made the decision.

That's why they didn't get revenge for the 2-0 defeat in the round of 16 last year in London. National coach Flick remained undefeated in his eleventh game as boss. The next opponent is on Saturday (8.45 p.m. / RTL and in the live ticker on ntv.de) in Budapest Hungary. Flick rotated a lot and changed his starting eleven to seven positions after the draw in Italy. It was "not a consequence" of the mixed performance in Bologna, the national coach emphasized before the game on ZDF, but stress control: "We have great quality and density in the team."

Lukas Klostermann, Schlotterbeck and David Raum moved into the back four. İlkay Gündoğan replaced Leon Goretzka on the double six next to Kimmich. Jamal Musiala and Hofmann occupied the offensive flanks, Kai Havertz tried his hand as often at Chelsea as a striker. Leroy Sané and Timo Werner were given a creative break. Only the central axis with Neuer, Antonio Rüdiger, Kimmich and Thomas Müller remained unchanged.

In the men’s version of the German soccer team’s European Championship jerseys, Flick’s players took a stand against racism before kick-off: as at the European Championship, they knelt on the pitch with the English team. The sold-out arena shone in rainbow colors. The English, who surprisingly lost 1-0 in Hungary at the start, called up ten players from the last duel. They quickly came under pressure: Havertz tested goalkeeper Jordan Pickford for the first time after just 60 seconds, and Rüdiger extended the ball after Kimmich's corner, but Kyle Walker saved from Müller in dire need.

But the European Championship runners-up started similarly aggressively, attacked early and put the German defense under pressure as they built up the game. The first goal celebration was premature: Hofmann's goal after a long pass from Schlotterbeck was withdrawn for offside - video evidence confirmed the decision (23'). On the other hand, Neuer was lucky when the ball slipped through his hands, but Kane shot over the goal (27th). Then the Bayern keeper made a strong save from a shot by Bukayo Saka (45.1).

Intensity, speed, commitment: Flick saw everything he had asked of his team. The spark to the audience also jumped over. What was missing was efficiency on offense. That changed after the break when Hofmann scored correctly. In return, Neuer parried a shot from Mason Mount brilliantly (53'). Müller failed with a great chance at Pickford (70th), a little later substitute Werner (75th) - then Neuer saved again outstandingly against Kane (76th) and was beaten a little later. 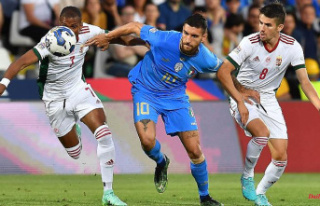