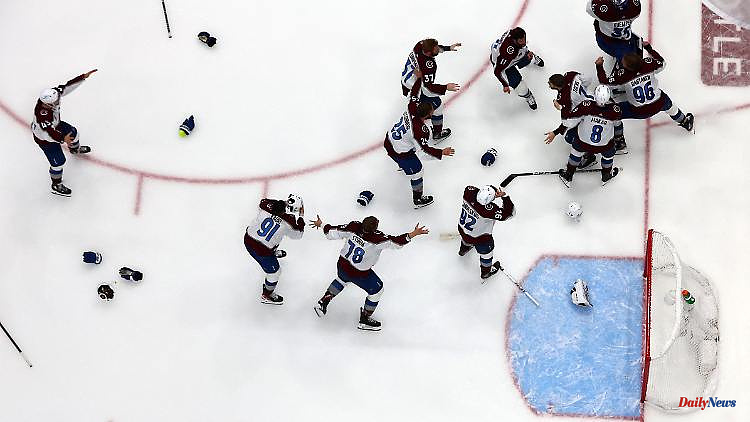 He did it. Nico Sturm is only the fifth German ice hockey professional to triumph in the NHL. It was only a quarter of a year ago that he switched to the new champion, the Colorado Avanlanche. The fact that he was at the bottom of the NHL makes even hardened professionals emotional.

In the last seconds of game six, Nico Sturm sent "a quick prayer or two upwards", then there was no stopping the German professional of the new NHL champion. This was followed by wild hugs, loud screams of joy, boundless cheering and the moment of pleasure with the almost 20 kilogram heavy and 90 centimeter large Stanley Cup in the arms on the ice of the beaten and dethroned opponent. "It's the hardest thing you can do in your professional life," he said on Sky after the Colorado Avalanche's 16th and most important win in the playoffs. "One imagined that it would be an explosion of emotions, but at the moment it just feels unrealistic. It will take a few days."

Colorado won 2-1 on Monday night at Tampa Bay Lightning, after all the NHL winner of the past two years. With the victory at the rival, the "Avs" managed the decisive fourth success in the final series in the sixth encounter. "The worst NHL team five years ago completed its journey to the top of the hockey world Sunday night," wrote the Denver Post. At the end of the 2016-17 season, Colorado was ranked 30th and bottom in the NHL. The record was devastating: 56 defeats in 82 games. And now the fairy tale. Canadian NHL expert Pierre Lebrun confessed with clairvoyant abilities before the final series on "The Athletic": "It really feels like Colorado's time has come after a spectacular roster has been formed with patience and a few tweaks."

General Manager Joe Sakic is considered to be the maker of the fairy tale. The 52-year-old Canadian is an NHL legend and has been a member of the "Hall of Fame" and the Triple Gold Club (Stanley Cup, world title, Olympic victory) since 2012. His number "19" is no longer assigned by the Avalanche. The highest honor in North American sport. After two triumphs as a formative player, he can now attach a large part to the success. Because it was above all his work that made this squad possible, which plays such fast, creative and hard ice hockey. It's a perfect mix of bought-in players who have had outstanding development and super talents like Bowen Byram and especially Cale Makar. The 23-year-old Canadian defenseman received the Conn Smythe Trophy for Most Valuable Player of the Playoffs. Previously only Avalanche players Sakic (1996) and goalie Patrick Roy (2001) had this great honor. The team's big stars include the hulking Nathan MacKinnon, Nazem Kadri, Finland's Mikko Rantanen and Artturi Lehkonen, and captain Gabriel Landeskog, who has been with the franchise since 2011.

"It was like watching a video game," said Erik Johnson at the sporting peak. At 34, he is one of the older Colorado players. He has been playing for Avalanche since 2011 and almost wanted to end his career last year. Landeskog was the first to pass the trophy on to him for the triumphant, emotional lap of honor. "She's heavier than I thought," commented Johnson.

"You don't want to be the one who drops him," Sturm commented with a laugh. For him it was a Stanley Cup win in no time. He only moved from Minnesota to Denver in mid-March - with only one goal: "I want to help the team in Colorado win the Stanley Cup. I'll think about everything else after the season." Unlike superstar Leon Draisaitl, who eliminated Sturm with the "Avalanche" in the semifinals, the former college player wasn't one to put his stamp on the game. The centre-forward only appeared sporadically in the last match of the season, for 5:43 minutes he was mainly responsible for defensive tasks - the spectacle was staged by others.

MacKinnon, who shone with a goal and assist, played the leading role in the decisive game. "Incredible, it's crazy," said MacKinnon, "I can't wait to hug my family." Landeskog added: "Dreamed, wanted and worked for over 20 years - now, after many crazy years, everything is finally paying off."

Sturm is nevertheless grateful for his (supporting) role in the Avalanche's third title win. That's why his first path after the final siren in the hustle and bustle on the ice led to Sakic. "I thanked him for bringing me on board," he said, "they gave me the opportunity to show that I can help such a team in certain situations." He was "a deep player," said Sturm of the sports information service, "of course it's all about closing the back, winning my face-offs, being outnumbered." Until recently, his career had been as unspectacular as his game: Trained in his hometown of Augsburg, he switched to the juniors of the second division club ESV Kaufbeuren, went to America at the age of 19 - to a second-rate junior team.

No NHL club was interested in him. Sturm, who has never played for the national team, studied economics at Clarkson University in Potsdam/New York and only caught the eye of the best ice hockey league in the world as a college player. In April 2019 he signed with Minnesota Wild, three years later Sakic brought him to Denver: "Of course that was my luck." As a child, he dreamed of "scoring the decisive goal in a Stanley Cup final and then lifting the cup." The second became a reality Sunday night in Florida. The first remains reserved for the only German Uwe Krupp, who shot Colorado to its first NHL title 26 years ago.

For storm at this moment it doesn't matter. "The best thing is that you can share such moments with the family, my brother and my girlfriend are here. I just want to say 'thank you', also to my parents at home," emphasized Sturm, who is only the fifth German in the strongest ice hockey league in the world. Before him, only Uwe Krupp, Dennis Seidenberg, Tom Kühnhackl and Philipp Grubauer had succeeded.

National coach Toni Söderholm was correspondingly pleased and congratulated via social networks "a fine person and athlete who has earned everything through hard, uncompromising work. Enjoy the Stanley Cup dear @nicosturm7, the holy grail in ice hockey". There are a lot of good players, including German players, who didn't get this chance, said Sturm himself. "You have to be lucky to play in such a position." The Avalanche, which is to be celebrated with a big parade in Denver on Thursday, retained its 100 percent yield thanks to the success. Every time the team made it to the decisive series for the title, it ended up winning the championship: 1996, 2001 and 2022. 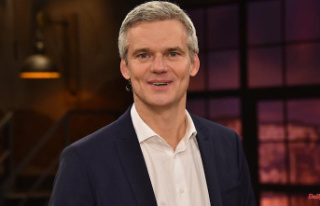 Ironman instead of "Tagesschau": Thorsten...