Tennis drama at the French Open: an injury that harms Zverev - and helps 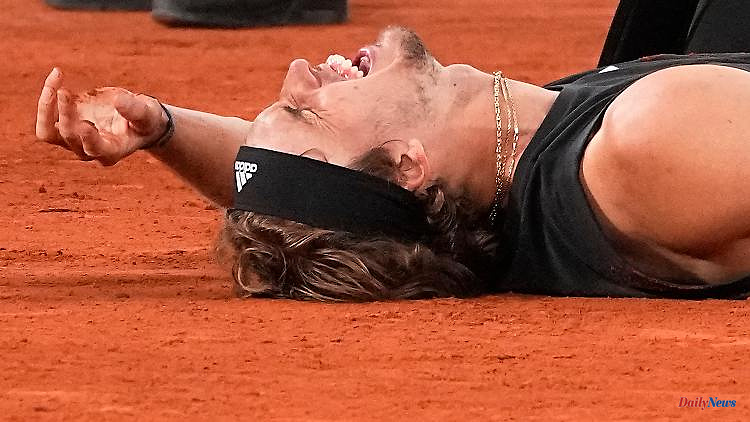 Alexander Zverev fails again in his big dream. Once again he misses the triumph at a Grand Slam tournament. But this time the failure is particularly bitter. But not only from a sporting point of view, because his trip to the French Open also serves as a rehabilitation measure.

When Alexander Zverev entered the Philippe Chatrier court again on crutches, he was celebrated by the audience with loud chants. Like a hero. A tragic one. The hug with his opponent, with Rafael Nadal, it was a goosebump moment. As great as the pain of the German tennis star was, so was the pity of the Spanish giant, who is actually unbeatable at the French Open and still faltered in this spectacular semi-final. The two had a remarkable match over three hours before Zverev slipped on the red ashes, twisted his right foot in a cruel way and the 25-year-old screamed in pain. What a tragic end to a German hero's journey.

It ended a round before the final, it ended again shortly before triumph in a Grand Slam, it ended before Zverev could reach for the top spot in the world rankings. All of this hurts a lot. And the diagnosis of how serious his injury really is is still pending. The best German tennis player may be threatened with a long, very long break. He himself has already indicated this via Instagram and added: "After the first medical examinations, it looks like I've torn several ligaments in my right foot." His brother and manager Mischa said live on Instagram from Eurosport: "He'll see a few doctors in Germany on Monday and then we'll know more." There is still hope that nothing is broken, said the ex-professional, but it doesn't look so good. That would be a disaster for his brother's sporting ambitions.

Nadal also felt for Zverev. "I hope he's not injured that badly and that nothing is broken," said the Spaniard, who had imagined his return to the Roland Garros final quite differently. The Spaniard was celebrated by the fans on his 36th birthday, but he didn't really want to be happy after Zverev's task. "I know how hard he is fighting to win a Grand Slam tournament. I'm sure he will win not just one but several," he said of Zverev. Very welcome balm for the pain of the new number two in the world rankings. This is the German from Monday when the new ranking is published.

But there is a second dimension to his injury. Because Zverev, who often seems so unapproachable, sometimes uncontrolled, who (so far) never achieved the thrilling or even loved status in the German public, like the young Boris Becker, revealed another side on Friday evening in Paris. A side of great feelings, of positive emotions. When he came back from the dressing room, visibly in shock, thanked the audience for their support, for the encouraging applause, that was great.

He had not always shown this size in his career. His successful time on the court is paved with small and big freaks. Many triads were overlooked, even if the country always alienated its tennis star. However, his uninhibited attack on the referee's chair at the end of February at the tournament in Acapulco was no longer ignored. Yes, Zverev quickly became remorseful, but he had finally shattered his image at that moment. "It's hard to put into words how much I regret my behavior during and after yesterday's doubles," he wrote on Instagram. "It just shouldn't have happened and there's no excuse."

Once again. Zverev has had the reputation of being a lout on the pitch for years. One who unloads his emotions in angry actions. At the beginning of May he gave surprising insights into his emotional life. The path his career has taken in recent months has not been satisfactory for him. "I'm not happy with the status I currently have as a tennis player. But I'm where I am," he admitted and specified: "I have to deal with a lot of things that don't necessarily have anything to do with tennis. I hope I can fully focus on tennis again to become a better player again."

The past few years have been tough for the native of Hamburg. In 2020, image-damaging images appeared that showed him at a party in his adopted home of Monte Carlo, at a time when he said he should have been in corona quarantine. His participation in the controversial Adria Tour of controversial tennis legend Novak Djokovic during the pandemic also brought him a lot of criticism. There have been allegations of domestic violence from ex-girlfriend Olga Sharypova since 2020, and the relationship with his ex-partner Brenda Patea, with whom Zverev has a daughter, is at least tense.

The Olympic victory in 2021 finally seemed to be able to turn things around, but at the latest when Zverev insulted and attacked the referee in Acapulco, his extremely thin nerves were revealed once again. Zverev emphasized on the "Tennis Channel" that it was urgently time for a real turnaround: "The career of a tennis player is limited in time. When you're young, you think: 'Oh, I still have enough time, I'm more like it Hunter as hunted. That has changed. From now on I should concentrate on tennis."

That worked out in a remarkable way at the French Open. He also seemed very focused in the previous tournaments - and played well. If the first rounds in Paris were tough, he convinced at the latest in the quarterfinals against the Spanish tennis sensation Carlos Alcaraz and then in the semifinals against Nadal. How tragic that Zverev was able to rehabilitate himself in one of the strongest moments of recent tennis history for a lot of what had gone wrong in his career before, which had cost him a lot of love, affection and, yes, respect. 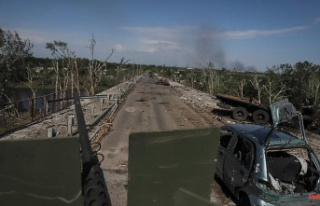 War day at a glance: Kyiv and Moscow exchange casualties...