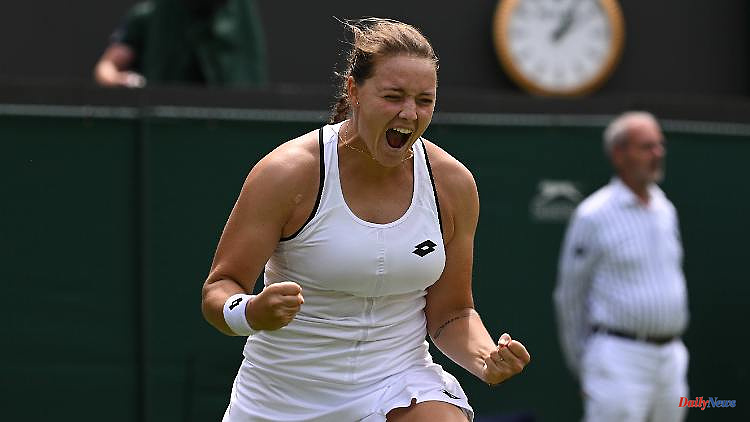 Jule Niemeier inspires Wimbledon. The 22-year-old German is one of the big surprises at the Grand Slam and one of the very big hopes in German tennis. Her story is unusual, her possibilities are gigantic, colleagues rave.

The ball is still on the way when Jule Niemeier throws away her racket and celebrates the greatest success of her tennis career. The young woman from Dortmund is in the round of 16 of the legendary Grand Slam in Wimbledon - and that doesn't have to be the end of her remarkable racket fairy tale. With the 30-year-old Brit Heather Watson, a feasible task awaits on Sunday. An opponent who is actually past her strongest days, but is now also among the top 16 on the sacred turf of London for the first time.

Of course, Niemeier was happy after the hard-fought victory against the tough Ukrainian Lesia Zurenko. But not satisfied. Her game was too shaky, too nervous, too error-prone. "I'm just very happy that I won the match, even if I didn't play my best tennis," said Niemeier. "It just took a load off my heart, today had nothing to do with the match two days ago." Two days ago, Niemeier defeated Anett Kontaveit, third in the world rankings. She had thundered over the Estonian who had no chance. Wimbledon had once again fallen in love with a German tennis girl.

The 22-year-old is not alone in writing a heroic story in the All England Club. Tatjana Maria is a second German player in the round of 16. However, Maria is already 34 years old. Two generations, one emotional world: euphoria. How far can the path of the two still lead? There could be a duel in the quarterfinals. A topic for the (near) future. It should belong to Jule Niemeier in German tennis. In these days of London, she impressively hints at why the hopes for a new heroine are so high. Especially on grass. "Hard serves, a lot of undercut and deep balls, stops, going to the net again and again, that's just my thing."

Niemeier has a fantastic serve, although there was little to see against Zurenko. But even without her big weapon, she prevailed. Because she has ways to adjust her game if an important instrument refuses to work. Niemeier has a powerful forehand, a poisonous backhand slice and is blessed with a fine hand and remarkable game intelligence. This is combined, for example, in seamless stops that are almost impossible for their opponents to walk on.

But Niemeier also has the gift of waiting patiently for the field to open up or for her opponent to make a crucial mistake. Like match point. In the final rally she was never powerful, but with her slice Zurenko took the power and the possibility of a powerful winner. The Dortmund woman lurked in the 22-second change - and was rewarded. It was the reward for a mental tour de force in many respects.

The final set started with five breaks in a row. Niemeier acknowledged this with a desperate smile, but collected himself and finally got through her service. She then held her forefinger to her temple. Played with brains. Won with brains. "I think a lot of people expected me to win that relatively easily today," she said. "We've prepared for that. If you beat a top ten player two days ago, you want to win the next match to prove it to yourself. That also played a role."

Niemeier is convinced that she can beat any opponent in the tournament. That's what she said after the win against Kontaveit. You don't have to interpret that as a touch of arrogance, but rather as a conviction that her time is now beginning. At 22, she is where experts saw her before her career was bogged down by injuries and lost momentum during the pandemic. She lacked the rhythm. "With Jule, the puzzle is still being put together," says national coach Barbara Rittner. "She was about to take off just before Corona. She missed the matches. I always said that if she stays calm and keeps working and doesn't lose her head and gets restless, she will go her own way." She has a very professional team around her and will certainly benefit from the experience she is gaining." There will be setbacks, says Rittner, but "Jule is currently on the verge of making it to the top."

Bitter for Niemeier. As a result of the sanctions against Russian and Belarusian athletes, no world ranking points will be awarded at Wimbledon this year. In the ranking, it is currently only in 108th place. That's going to change. Andrea Petkovic, along with Kerber a representative of the "golden generation", sees Dortmund as a candidate for the front. "In terms of play, she is an absolute top 20 player for me," said Petkovic of the "Süddeutsche Zeitung", "she knows that, I tell her that seven to eight times a day."

The national coach is therefore "grateful for every month" that Petkovic, Kerber or Maria spend on the tour. "On the one hand because they give the boys time and on the other hand because they can pass on their experience in training and doubles," Rittner told the sports information service. "Petko in particular is such a positive person, but Angie is also opening up more and more. She gave a great speech at the Fed Cup in Kazakhstan." Kerber confirms that: "I like to give something back, I'm always open and I want to help them." She says about Niemeier: "She knows exactly what she can do, what she wants."

Her trainer Christopher Kas, with whom she has been working for three months, also recognizes exceptional qualities in her game. "Jule has things that are difficult for you to train," says the former doubles specialist of "SZ". Niemeier has an incredibly good feeling for the ball and a very high level of game intelligence. You read the opponent. "These are soft factors, you either have them or you don't. She is extremely curious and has a thirst for knowledge. She always wants to try something new in training." It's now about "that she finds the right shot with the many possibilities that she has and that she believes in how good these skills really are".

Their game is a symbiosis of the power of the current generation and the cleverness and cunning of the icons of the 90s. And it fuels the great hope that a successor for Kerber, Petkovic and Sabine Lisicki, who is currently struggling to get back into good shape, has finally been found. One that will win Germany over again. But slowly.

At 22, Niemeier is no longer a child prodigy. No Coco Gauff or Iga Świątek. Her path is planned, she has passed her Abitur and now wants to hit the ground running. Rittner says: "Jule is probably just someone who likes to take time to develop step by step. But she can also get off to a great start." Next stop on the way to the top echelons of the tennis galaxy is Heather Watson. "She's a great player, an experienced player." But in the best-case scenario, just another stage on the way to the very top.

1 Cabu opened Cabu's eyes to the Vel' d'Hiv... 2 26 percent protection: Deutsche Börse with a twelve... 3 Athletics. Wilfried Happio was reportedly accused... 4 UK inflation increases at the fastest pace in 40 years,... 5 Boris Johnson: What are his threats to his job now? 6 Northern Ireland Protocol: Fact-checking claims regarding... 7 "As a black woman working in STEM, I am used... 8 After Supreme Court decision: New York wants to enshrine... 9 Crazy start of the Bundesliga: When "Boss Rahn"... 10 Used car check: Renault Clio - chic, but with weaknesses 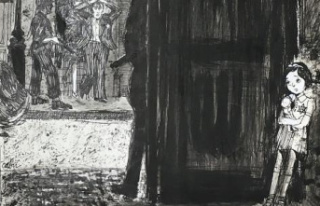