The DFB-Elf in the individual review: Furious Hendrich becomes a doubly tragic figure

Before kick-off, the DFB team has to cope with the first low blow: Captain Alex Popp is not in the final of the European Championship. 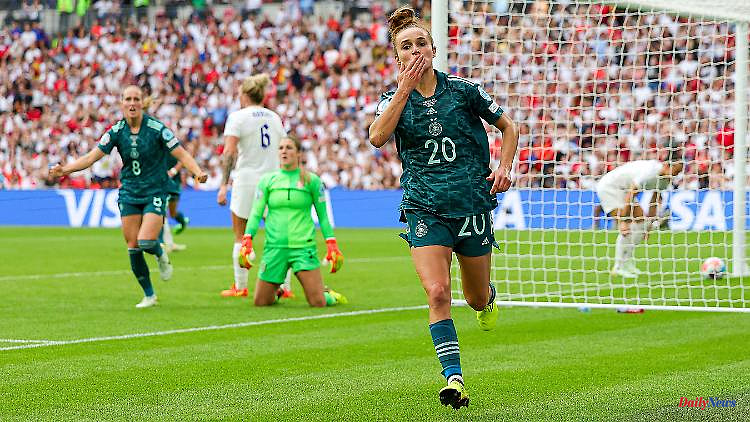 Before kick-off, the DFB team has to cope with the first low blow: Captain Alex Popp is not in the final of the European Championship. A serious failure against the aggressive English women. Lea Schüller, who has just recovered, is not an adequate replacement and the Germans are also showing weaknesses on the defensive.

Merle Frohms: The goalkeeper wasn't affected by her team's nervous start. She grabbed twice and had to endure a heavy shove from England striker Ellen White. She got more to do than before in the tournament and had to prove herself, especially in the penalty area. She succeeded – although she conceded two goals, twice as many as in the previous five games combined. Powerless at 1-0 because she was knocked over by Ella Toone, who rushed towards her, at 2-1 unlucky Hendrich stood in her way in the turmoil in the penalty area.

Giulia Gwinn: As in the previous games, the full-back didn't shy away from a sprint, going a long way alternating between defensive and offensive attempts. However, she had a lot more to do defensively than the offensive rail player would have liked. The interaction with Svenja Huth also didn't work as well as before and in the first half she was sometimes too far away from her opponent. She improved on that in the second half as she cleared away more and more balls. Their offensive runs didn't bring the big danger this time.

Kathi Hendrich: Rating the central defender was particularly difficult this time. Depending on when you looked closely, you could give her a very good or a poor report card. At the beginning she seemed to be under a lot of pressure from the unusually aggressive English players and wasted balls that resulted in corners. Increasingly she played her way before she helped to cause the 0:1 (62nd) because together with Marina Hegering she completely slept through Toone's defense, which she could simply run through. At 1:2 (110 th ) she was unlucky in Frohm's way, who couldn't get hold of the ball. She too caught up too late to prevent the decisive goal. But a brilliant move was the one before the 1-1: She went the long way when the English women were almost through on the outside, successfully separated from the ball, immediately switched to attack, ran down the entire length and handed over for a successful combination the goal by Lina Magull (79th).

Marina Hegering: The oldest in the squad was the least affected by the nervousness that gripped the German team at the beginning. The 32-year-old consistently headed out potentially dangerous balls and was once again the calming influence of her team. Her opponent eluded her in the 39th minute, creating the most dangerous chance to date and the shot went just over the bar - but it could have been offside. When it was 1:0, together with Hendrich, she slept through Toone, who was taking off – a big mistake. However, until she was substituted in the 103rd minute, she was again confident, calm and consistent when necessary.

Sara Doorsoun (from 103rd): She came on for Hegering and still had 27 minutes to play. Hendrich had to save for them in the 108th minute, and even a free kick that went wide didn't bring anything. She played along, but wasn't decisive. The fact that it was 2-1 during the time she was on the pitch had nothing to do with the Frankfurter.

Felicitas Rauch: She had to face Beth Mead, the top scorer and player of the tournament. Not an easy task, which she, like her team, approached nervously. In the first half, most of the attacks went through her side, she was sprinted several times, which caused danger in front of the German goal. In the 41st minute she could only manage with a foul, she sent Mead down and was shown a yellow card. When she intervened offensively in the 62nd minute, her bad pass resulted in a counterattack. At 2:1 she was again too far away from her opponent, this time Chloe Kelly, which made the poking in the penalty area possible in the first place. But there was no denying her tireless work, a few offensive actions were also her fault, and she pulled through until she was substituted in the 113th minute.

Lena Lattwein (from 113.): She came after the 2-1, should liven up the game again, but she didn't succeed. Which was less because of her than because of the English women, who cleverly went into the time game on their own corner.

Lina Magull: Actually, the Bayern captain is the offensive part in midfield, but initially she only had to do with running-intensive defensive work. After 13 minutes, she followed up when England tried to counterattack, separating her from the ball and denying the scoring opportunity. In the second half she was there offensively, in the 50th minute she shot just wide of the left in the penalty area. In the 66th she had the equalizer on her foot, the ball bounced against the post. In the 79th minute, she was rewarded for her grueling struggle: she ran into the six-yard box and hit the bar massively. At the end of the regular season, she went visibly on the gums and was logically replaced.

Linda Dallmann (from 91st): With her otherwise strong dribbles, the Bayern player could not put the English women under pressure as usual, she lacked the esprit against the aggressive opponents. She was not a decisive factor in this final.

Lena Oberdorf: Aggressive duels, opponents who don't give the ball away, a game that requires a lot of effort - this final was one that reflects Lena Oberdorf's strengths. She may have been challenged like never before in the tournament, but she wasn't as strong as she was against France. Although she acted with an overview on the ball, she did not have the game under control. She was fouled several times and had to take quite a beating - several times she handed it out herself. In the 57th minute she made do with tripping and from then on was booked with a yellow card. The threat of a yellow-red card calmed their actions. This time it wasn't the outstanding game of the 20-year-olds, but that doesn't change anything about an incredibly strong tournament overall. She was rightly named the tournament's best young player by UEFA.

Sara Däbritz: The player from Olympique Lyon was extremely busy with defensive work, especially the future Bayern offensive woman Georgia Stanway presented her with tasks. In the tenth minute she suddenly had some space and was the only one in the German team who was able to set an accent in the first half: Lucy Bronze blocked her shot with her head. Two minutes later she was the one to finish, but wide to the left. She was substituted in the 73rd minute.

Sydney Lohmann (from 73rd): Even before she was substituted on, the Bayern player took on the linesman, and then she didn't shy away from a duel on the pitch. It was extremely clear: Lohmann didn't want to lose, not at any price. She was tough, showed assertiveness. She was involved in equalizing just six minutes after coming on as a substitute when she found Wassmuth's inside right in the penalty area, who played the crucial pass to goalscorer Magull.

Svenja Huth: She opened the tournament as captain, she closed it as captain. Because Alexandra Popp failed surprisingly, the 31-year-old wore the bandage. The Wolfsburg woman prepared the first German goal chance through Däbritz (10th), but otherwise hardly got any crosses. She ran tirelessly, sprinting to the baseline even in extra time. But this time she didn't stick with a decisive scene, also because the English women consistently blocked her.

Jule Brand: As in the semifinals against France, the future Wolfsburg player played for Klara Bühl, who was not yet able to play again due to Corona. Once again, the 19-year-old was extremely committed, also in defensive work. However, she was overwhelmed by the strong English players and gave her teammates extra work. In addition, her balls went too often when she wanted to play opening passes. She was substituted in the second half.

Tabea Waßmuth (from 46th): The German offensive came to life with the woman from Wolfsburg. With her, things went bolder, suddenly the DFB team dared to take shots on goal and put pressure on the English defence. In the 48th minute she was looking for the end herself, but should have played it again better. The doctoral student in neuropsychology prepared Magull's compensation with her passport.

Lea Schüller: It is unclear when the striker found out about her nomination, it only became official seconds before kick-off. Until then, captain and goal scorer Alexandra Popp was in the starting XI, but she had to pass due to muscular problems. As in the opening game against Denmark, the Bayern striker was on the field, who had been named player of the Bundesliga season by “Kicker” that morning. But since it was a completely different game, the 24-year-old didn't have it easy. Because the defense was particularly busy, it didn't really come into play. In the 58th minute she also received a yellow card in a one-on-one with Mary Earps. Before she was substituted, it was clear to her that she missed almost a week of training after the opening game because of her corona infection, she was visibly knocked out.

Nicole Anyomi (from 67th): Before the tournament, the Frankfurt native was told by national coach Martina Voss-Tecklenburg that she was planning to have her as a defender. In this position she also played against Finland. But in the final she was suddenly supposed to play offensively, and the 22-year-old found it difficult. She ran a lot, but never really got into the game, didn't get the ball consistently enough and looked lost. The coach didn't do herself, her team, or Anyomi any favors by coming on.

1 Start of the "Ring" in Bayreuth: "Rheingold"... 2 "It used to be hot too": Why weather memories... 3 Saxony-Anhalt: Intel is hoping for a groundbreaking... 4 This is how cities prepare for a gas shortage 5 Gas conflict with Russia: Always trouble with SGT-A65:... 6 Toxic substances, 9-euro ticket, Bafög up to 45 –... 7 Energy crisis: Luisa Neubauer considers "extended... 8 Chaos in Berlin? "Administrative bashing must... 9 Formula 1: The lessons of the Hungarian Grand Prix 10 No all-clear: forest fires in Saxony continue to rage 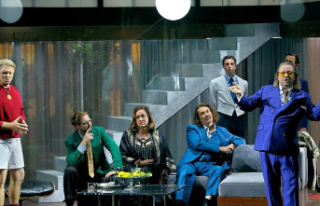 Start of the "Ring" in Bayreuth: "Rheingold"...