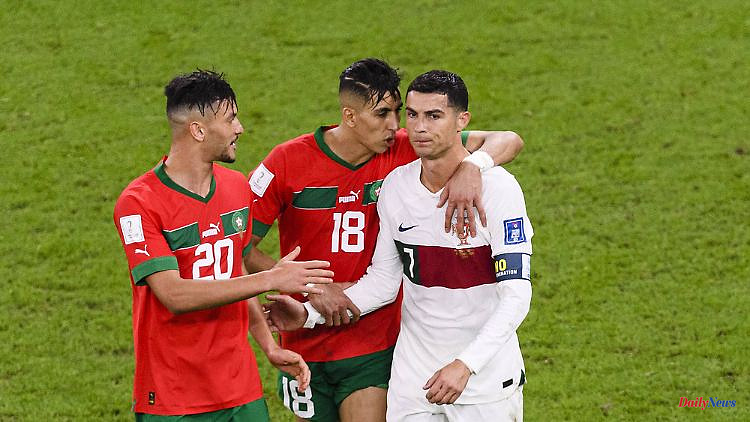 Now it's over. The biggest audience star of the World Cup in Qatar resigns. Cristiano Ronaldo meets hostile fans for the first time in the quarterfinals against Morocco. After the World Cup from the Portuguese, he is no longer the story. Just another defeated hero.

Cristiano Ronaldo's last minute of the World Cup lasted 47 seconds. Then he left the seat and took over the cameras in the cabin tunnel. The 37-year-old cries bitter tears. The dream has burst and no one feels sorry for him. Even before the game and when he comes on, everything is different. For the first time at this World Cup, the stadium isn't behind him. The grotesque hype from the Switzerland game is no more. Moroccan fans only whistled and booed Cristiano Ronaldo. No one is waiting for him at Al-Thumama Stadium, no one wants to see him there. They're a little scared of him. After all, a long time ago he was the best footballer in the world, proven five times when he was voted World Footballer of the Year. But little of that remains.

Sure, he tries again in stoppage time. But his shot doesn't find its way into the net. His heroic story has been told, the moment that begins with "of all things" is missing. That pleases the Moroccans in the stadium, who can't wait for the final whistle. After Pepe doesn't score either, the time has come. End. No showdown in the Lusail with Lionel Messi in the last superstar clash of the past 15 years. Nothing. Just over. The spotlight is no longer his.

Ronaldo is somewhere deep in the Moroccan penalty area. Maybe he was expecting one last ball, one last shot that will catapult him back into people's hearts. There isn't. And so the final 47 seconds begin with a camera crew appearing next to him out of nowhere, the enemy's celebrations escalating around him, and encouragement from Moroccans Achraf Dari and Jawad El Yamiq putting his arm around him and him whispered something. Ronaldo's gaze is blank. Scenes are playing out around him that he always claimed to be his own.

Like in the final of the Champions League in 2014. He's a phantom for 119 minutes and then scores a penalty to make it 4-1. It's the least important goal of the game but his 17th in the current competition. He lets himself be celebrated as if he had just won the handle pot all by himself. He is the undisputed star for everyone else to follow. City rivals Atlético Madrid are defeated, Real Madrid wins the Champions League for the tenth time and for the first time since 2002. It is the beginning of the years of European dominance of the royal team that have lasted to this day. Ronaldo will also win three more titles with Real. And then, with Portugal, he will claim heroic status in the 2016 European Championship final, although an injury sidelined him early on. He coaches on the sidelines and is the 12th man in the team to defeat hosts France.

Everything is different this time, the camera team accompanies him from the penalty area towards the dressing room. His head on the ground like Uwe Seeler and the Bobbies once did at the 1966 World Cup final. Seeler got another World Cup, Ronaldo won't get any more. And hardly anyone will find that a pity. Maybe his life partner, who soon scolds Instagram after the defeat and shoots against coach Fernando Santos, who in turn shows "no remorse" for the superstar's degradation, as he later reports at the press conference.

When Ronaldo has reached the sidelines after endless seconds, a fan storms onto the pitch. He wants to touch Ronaldo again, as has been happening time and time again on soccer fields around the world for a long time. With a final hook, he avoids the fan, who has already been identified and dragged away by the security forces. The cameras are always on, every step he takes because it will be his last on a World Cup pitch. Then he left the seat and took over the cameras in the cabin tunnel. The 37-year-old cries bitter tears. The dream has burst and somehow there is something with compassion.

"It's not important what you think about someone when they come, but when they go," football coach Jürgen Klopp said when he said goodbye in Dortmund and everyone in Dortmund thought well of him. Forever and ever. Ronaldo's turbulent crash, which was accompanied by all sorts of malice, now ends in Al Thumama. There are already rumors about his imminent resignation. At the lowest point of his career. It is not clear how he will be thought of in the future.

1 Emirates rely on robots: Japan starts the first moon... 2 Trapped under the double decker: bus accident in Berlin:... 3 Long wait for an ambulance: 15-year-old dies in a... 4 "Hands off the book!": For those who still... 5 Bavaria: cyclist caught by tram: seriously injured 6 Thuringia: winter tires for bicycles for more safety... 7 Hesse: It remains frosty at the start of the week 8 Thuringia: Frog King stolen from the Erfurt Christmas... 9 Saxony-Anhalt: Skiing and tobogganing in the Upper... 10 North Rhine-Westphalia: Comeback from Wirtz: "A... 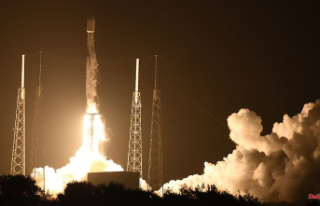