The lessons of the European Championship in England: The DFB team still has to get the biggest win

The Germans go home without the European Championship trophy, the title stays with the hosts in England. 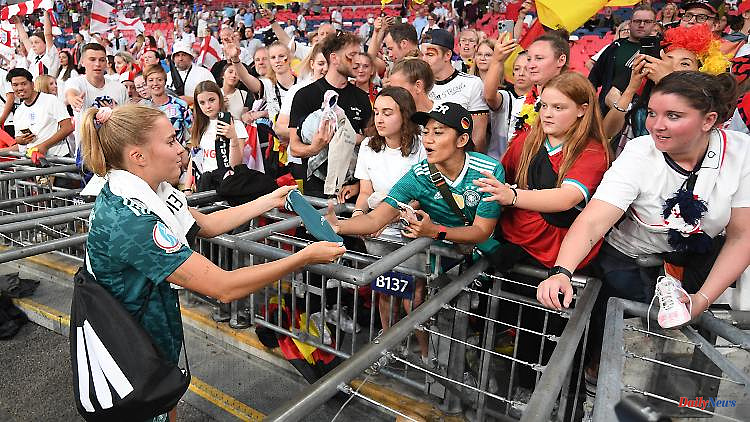 The Germans go home without the European Championship trophy, the title stays with the hosts in England. But the DFB women are still winners. You play in the final, have four successful weeks and above all: you inspire millions. But something must be left of it, they themselves demand.

"Equal Pay" and "Equal Play" are on everyone's lips at this tournament. Outsiders are demanding the former, i.e. equal pay for men and women in football. The second would initially satisfy the players: equal working conditions. They got this with the DFB team, the team behind the team was just as big as with the men.

For the first time, they were also able to train in Herzogenaurach, where the men had prepared for the European Championships last year. Best equipment for the best performance. It paid off, the title would have been just the icing on the cake of an outstanding tournament. Only one game was lost at this European Championship, the team only conceded three goals. The fact that it was the final that ended negatively is in the nature of a tournament mode. Bitter, too bad, but nothing that particularly reduces performance.

Nobody really knew where the team stood, skepticism and even pessimism were the prevailing feelings. But then the players presented themselves as a close-knit community with incredible determination, tactical class and fun that was contagious. The spark jumped over quickly, more and more millions of people watched the games of the German team in front of the TV. They celebrated Alexandra Popp's - unfortunately only almost perfect - EM fairy tale, they were enthusiastic about the sliding tackle and the elemental force of Lena Oberdorf, they were impressed by the complete calm in the storm of Marina Hegering. And when the Germans weren't on the field, the rapidly growing fan base danced with the team to "Cotton Eye Joe" and laughed at "Alexander Papp". Being successful while being likeable is the best way to get people on your side, to find fellow campaigners for your goals - the DFB team has done it brilliantly.

Voss-Tecklenburg has a real luxury problem. The full squad she nominated for the European Championship is incredibly strong. No other nation has such a balanced selection as Germany. There are top performers from their clubs on the bench. Linda Dallmann, for example, a regular at FC Bayern, is used as a backup for her teammate Lina Magull. In the third group game against Finland she started - and promptly became player of the match. In the same game, Sophia Kleinherne also made her starting eleven debut as a left-back, played well and scored her first international goal at the same time.

After her corona infection after the opening game, in which she was in the starting XI, Bundesliga top scorer Lea Schüller has to give up behind the everything and always scorer Popp. After maternity leave, goalkeeper Almuth Schult had to be satisfied with the role of substitute for Merle Frohms. The third woman for goal is Ann-Katrin Berger, the third in the FIFA world goalkeeper selection. With Jule Brand and Sydney Lohmann, the DFB has two of the most promising talents in the squad, not forgetting that the regular players Lena Oberdorf, Klara Bühl and Giulia Gwinn are only 20, 21 and 23 years young. The squad combines experience and talent, serenity and carelessness. That fitted perfectly for this tournament - and gives hope for the future.

"I was always very dominant. I wanted to do everything alone as a coach, from start to finish," said Martina Voss-Tecklenburg about her beginnings with the DFB team. A few months before the 2019 World Cup in France, she took over the position as national coach and had to deal with the much larger staff than in her previous position as Swiss national coach. With Britta Carlson, Patrick Grolimund and Thomas Nörenberg, she has three assistants, as well as goalkeeping coach Michael Fuchs and now also Jan-Ingwer Callsen-Bracker as a neuroathletic coach. In 2019, at the World Cup quarter-finals, not everything in the coaching team seemed as harmonious as it is now, everyone has worked on themselves for the past three years. "The quality here from those responsible for sport is so good and well-rehearsed. It gives me much more security as a trainer," said Voss-Tecklenburg.

This also applies to the cooperation with the players, with whom things have crashed several times in preparation for the European Championship. Clearing thunderstorms, clarifying conversations, led to more understanding for each other. The "load control" was one of those points, the players demanded more sessions on the pitch, now the coach takes the players along more and builds on personal responsibility. "We've gotten closer together over time. The coaching team involves us, we give them feedback," said Svenja Huth. Lena Lattwein explained in the DFB documentary "Born for this": "These difficult phases did us good, we managed to speak out and find ourselves again."

In England, everyone keeps emphasizing how good the atmosphere in the team is, even without being asked. "The way we stand together on the pitch makes me incredibly proud," said captain Alexandra Popp after the semifinals. "I've been here for ten years - and I've honestly never experienced such a team spirit, such a team structure." Because even those who are not allowed to play are fully committed. Laura Freigang screams her heart out in every game, Schult brings drinking bottles, everyone pushes, motivates, hardly sits still. Kleinherne emphasized on ntv/RTL that she had never experienced such a "living bank". The term coined the EM.

A game like this doesn't just start with the kick-off. Very important work is already done beforehand. Scouts and game analysts observe the opponents, draw up tactical profiles and identify weaknesses. Assistant trainer Britta Carlson said that up to six scouts were deployed at this European Championship, along with the team's analysts. They follow the games of the future opponents in the stadium, examine videos, etc. One of them is Ailien Poese, who will switch from the DFB to 1. FC Union after the tournament and will coach the women's regional league team towards the Bundesliga. She explained to ARD her work at the European Championships, where she is primarily trying to identify the weak points of the opposing teams and determine how the Germans can create chances. "Does it make more sense to start directly because the back four is not so good in possession or is it better to withdraw because the deep spaces behind your own chain are dangerous?" She wonders. "Who stands out with a pattern, what are team tactical patterns that they play by?"

The team is briefed with this heap of information - and that's going extremely well at this European Championship. After the semi-final against France (2-1), Popp said her team knew full well that captain Wendie Renard, a central defender and a threat from set pieces, would come out on crosses from the right and create space in her back to come in. The Germans were also told that goalkeeper Pauline Peyraud-Magnin has weaknesses when attacked from the far end. It should be worth it. The good analysis had already paid off in the quarterfinals against Austria. Goalkeeping coach Fuchs noticed that goalkeeper Manuela Zinsberger had weaknesses with the ball. Popp then attacked them aggressively throughout the game - and used this tactic to score the decisive 2-0 (90th).

"If not now, then when?" Martina Voss-Tecklenburg said the day before the final about what should remain. "In the end we will only win if we can end everything that is happening with sustainability. Not that it's an event that's up right now and everyone's happy about it, no, it has to be something of it remain. It must be a great opportunity to take the next steps in women's football in all countries." Svenja Huth is also a committed reminder to take women's football to a new level. "It would be a great success if we manage to inspire people here, to win them, but also to retain them in the long term," said the winger. Because it's not just about the DFB team, for which the World Cup in Australia and New Zealand is already coming up next year.

It's also about the Bundesliga, which is still under the radar for most of the public. The 31-year-old from champion and cup winner VfL Wolfsburg finally wants better structures, better conditions and more interest in her sport over the long term. The much-cited "Equal Play" should become reality, and the number of spectators throughout the Bundesliga should increase. An average of less than 1000 spectators in the stadiums is far from enough.

The Bundesliga will set a good example at the start of the new season. In the opening game Laura Freigang, Nicole Anyomi, Sophia Kleinherne and Sara Doorsoun come together again with Klara Bühl, Giulia Gwinn, Lina Magull, Lea Schüller, Linda Dallmann and Sydney Lohmann, then as opponents. Because the Champions League participants from Eintracht Frankfurt will receive FC Bayern on September 16th in the large Frankfurt stadium. FC Barcelona showed impressively in the Champions League last year that such an arena can get full - more than 90,000 were there when Barca received VfL Wolfsburg in the first leg of the semifinals.

The TV presentation also plays a big role, the Bundesliga is broadcast by MagentaSport, which is good because it offers a stage. But not one that promises an audience of millions. It will be different in the first away game of the champions, the game at TSG Hoffenheim on September 24th will also be on the ARD programme. Speaking of TV, goalkeeper Almuth Schult warns again and again that a transmission with just a few cameras, i.e. with less effort, cannot of course offer such spectacular pictures, the football then always looks slower than with a high-quality offer.

And then again to the DFB team: kick-off times for around World Cup qualifiers in the early afternoon in the middle of the week are extremely unfortunate. Only a few then have time to tune in or even go to the stadium. According to reports, these are due to the broadcasting public service broadcasters, which do not expect large ratings. The European Championship showed impressively that things can be different.

1 Transfer cracker in Formula 1: Aston Martin spectacularly... 2 The weather week in a quick check: heat wave in August... 3 Secret wedding ?: Lena is said to have said yes again 4 Moon could disturb Perseids: Saturn is particularly... 5 "It used to be hot too": Why weather memories... 6 Saxony: Unknown drive in a lightning burglary jewelry... 7 Saxony: Left: Children and young people advertise... 8 Hesse: Two dead in an accident on a federal road 9 Mecklenburg-Western Pomerania: 43-year-old drives... 10 Bavaria: Man is said to have killed his mother-in-law:... 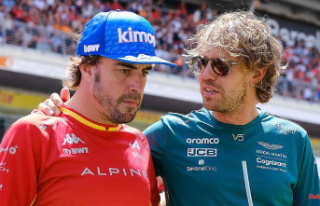