This eleven is not dead yet: the DFB team "tears up" even for Karl Lauterbach

The DFB debacle against Japan raises countless questions: Basically, it is always about the mentality of the team. 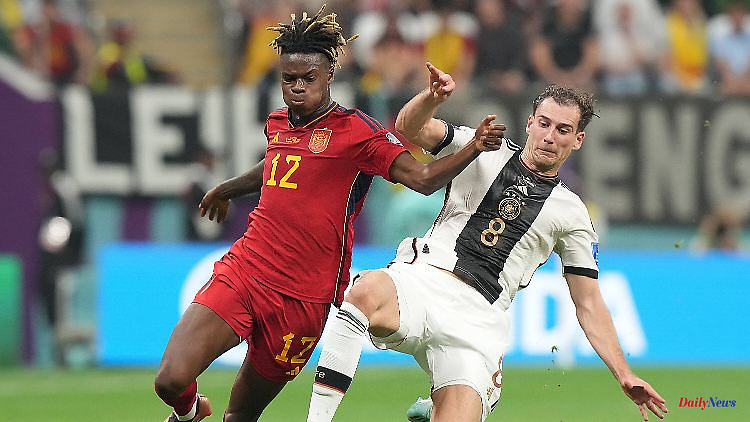 The DFB debacle against Japan raises countless questions: Basically, it is always about the mentality of the team. After a sudden drop in pressure, Hansi Flick's team is convincing against Spain for the moment. Does Federal Health Minister Karl Lauterbach now have to join the coaching team?

The 95th minute is running. Leon Goretzka sets out for a full sprint. Once again get everything out of the battered body. With a breakneck speed he chases after Nico Williams, who breaks through dangerously. With the last of his strength, the midfield engine starts to tackle the heroes, jumps off - and lynches the ball from the Spaniard's foot in a field-plow manner.

In return, Leroy Sané misses the mega chance of scoring the winning goal, but it remains 1-1 (0-0) against La Furia Roja. But Goretzka's 100% commitment is symbolic of the enormous will and the fight that this national team will bring to the pitch on Sunday evening at the Al-Bayt Stadium. An energy that has not been felt in this team for a long time. Which she will also reconcile with one or the other critical fan.

But if the Minister of Health watches the game before the big game and sends his "best wishes" to the national coach "in person", what can go wrong? Karl Lauterbach, who had a corona feud with Hansi Flick a year and a half ago (keyword: "so-called expert") with a subsequent conciliatory discussion, reports on Twitter that "team spirit" must now be shown and that "enough blasphemed about the team been".

What Lauterbach means: In Germany, after the bankruptcy against Japan, the swan song for German football has already started. Only one goal in front, despite countless opportunities, a shaky defense in the back. What else is there to come? And then it's next up against the Über-Spaniards, against whom the DFB team has only won once in this millennium and who just swept Costa Rica 7-0 from the field at the start of the World Cup. The last win in a tournament against La Furia Roja even comes from the EM 1988.

The days after the opening debacle against Japan are not easy. Personnel discussions and lots of other murmurs reached Doha, the capital of Qatar, which the DFB would like to avoid completely. Too far away. The team, who may still be called "The Team", who knows, prefers not to leave the castle at the end of the world. The English "Guardian" joins the long list of global media that no longer understand the DFB team at all. He writes about the downfall in a sympathetic way.

"They are no longer a tournament team and they no longer seem to have any leading players", so no longer a tournament team and no longer leading players, writes the renowned author Jonathan Wilson and breaks down the German crisis to winning the 2014 World Cup, the end of the world marveled at the "reboot" of German football after the catastrophes around the turn of the millennium. Wilson is just one voice in a sea of ​​voices criticizing the lack of development in the German game since then. They also question Flick's high pressing. The gigantic spaces that keep opening up and opening up again and again; a point that İlkay Gündoğan also chalked up in the catacombs after the Japan game. In addition, the absence of, well, leading players on the field.

Leading players aren't just the ones who direct the game. There are also those who intervene, who disrupt the opponent's rhythm with fouls, with nitpicking, with power. Not only do they have to shine, they also have to push the envelope. In essence, of course, it is also about the old mentality question. She will answer no against Japan. With countless shots on goal but not a single yellow card, Hansi Flick's team ran into a debacle. In doing so, they act against the trend: More and more teams at the World Cup use the legitimate tactical means of tough duels to gain respect and space on the field. A different national team can be seen against Spain. One that pulls itself together and throws it at the opponent as a collective.

The DFB-Elf does not give up the ball and, if necessary, pulls out the tackle. In the 37th minute, Thilo Kehrer draws the first German warning of the World Cup. In the center circle, he puts Ferran Torres in style after he stole the ball from him. The signal is: not with me, not with us!

Goretzka and Joshua Kimmich also accept the card later and thus prevent dangerous switching moments from the Spaniards. Hansi Flick is almost bursting with pride. "The team fought unconditionally," he says, contradicting the swansong to team spirit: "We're a team. We have a good relationship, even if it can be read differently. It's gigantic what the team has achieved. I I'm proud. There are warriors on the pitch playing with heart."

In the end, Germany saved a point with the international phantom with the number 9 and caused astonishment in the press. The English "Sun" writes: "Superjoker Füllkrug keeps Germany's World Cup hopes alive. On a night when we expected to wave the Germans 'goodbye', they simply showed their age-old resilience."

It will not be possible to fathom in depth what triggered the drop in pressure after Costa Rica's 1-0 draw with Japan. But one thing is clear: the team goes into the 90 minutes at Al-Bayt without the greatest fear of failure. "Costa Rica is changing everything," the "kicker" is at least certain of before kick-off. Because the duel with Spain does not mean: all or nothing. But only: With a draw and even with a defeat, Germany could still move into the round of 16 on the last matchday.

And the DFB-Elf may have an extra incentive because they want to show it to the many critics and complainers. Because they want to show the world that they are still one of the greatest teams in the world and can be mentioned in the same breath as Brazil, Argentina, France and Spain. Because the team wants to show that they are a team. And not a collection of club players brought together by nationality by accident.

Flick warns before the game: "It will be important to win the duels, because both teams are often in one-on-one situations." The DFB team is missing a real warhorse. A Dieter Eilts or a Thorsten Frings. Can Goretzka take on this role as he shares the pitch with İlkay Gündoğan and Joshua Kimmich? Very late he will answer this question for the evening with "yes".

Flick's lack of a real stop sign, a worker, a sweeper remains one of the major omissions of this tournament. It is largely inexplicable why BVB's formless and listless Karim Adeyemi is preferred to a resolute midfielder like Union Berlin's Rani Khedira. Adeyemi loves the hoe, Khedira loves confrontation.

Without someone like Khedira, others have to take care of it. They can do that too - and they can also cause uncomfortable pressure situations. Like Joshua Kimmich in the 56th minute. Then he smells the allusion from Spain keeper Unai Simon to his defender and straddles in between, Gündoğan grabs the ball and, after a hook, puts it back on the Bayern professional. The Spanish goalkeeper deflects his shot to the side. The best chance in the game so far. In the end it is 1:1. You refuted the English author Wilson a little. They can still become a tournament team again.

Somehow everything seems good, although nothing is good yet. When the old enemy's complacency returns, when arrogance creeps back in against Costa Rica, the fragile structure will collapse. After all: The team spirit demanded by Karl Lauterbach, the unconditional commitment, he is there every minute against Spain. This team lives in this one moment. And with this energy, more could be possible at the World Cup in Qatar than the round of 16. Maybe the DFB team will get the chance to get into the tournament. But first of all we have to fight against Costa Rica on Thursday (8 p.m. / ZDF, MagentaTV and in the live ticker on ntv.de). Maybe the Minister of Health trainer will send greetings again so that it works. 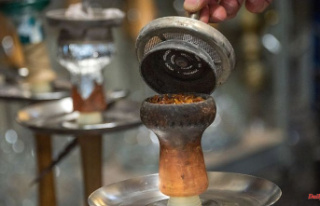